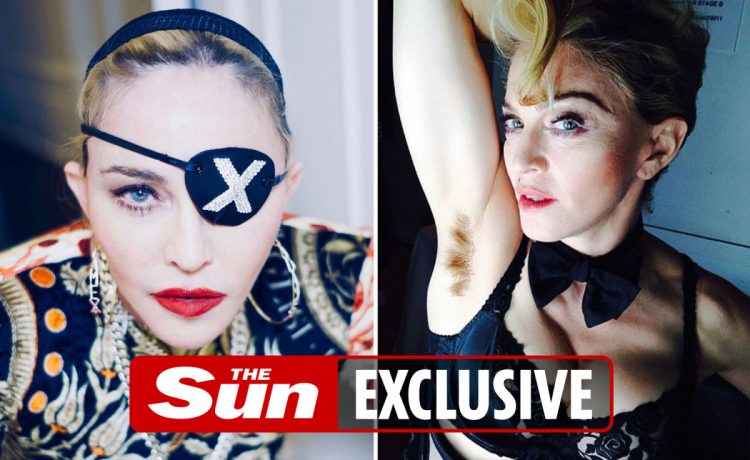 MADONNA has been shocking the world for the best part of four decades, and this year she’s bringing her antics to Netflix.

I’m told that the Queen of Pop has signed a deal with the streaming giant to broadcast a documentary giving a glimpse into her superstar life.

The one-off special will feature extensive footage from her Madame X tour, which ended last March, as well as behind- the-scenes clips of the singer in action.

But it certainly won’t be all smiles, as it is also expected to feature scenes of the superstar struggling with hip and knee injuries which caused her to axe several shows from the tour.

It will come 30 years after her groundbreaking documentary Truth Or Dare chronicling her life ­during her Blond ­Ambition world tour, which at the time was the highest-grossing documentary ever made.

A source said: “Madonna quite literally put blood, sweat and tears into the Madame X tour and she wants this documentary to show it off for the spectacle that it was.

“She’s never been the type to fade into the background, so viewers will definitely get to witness her dry sense of humour.

“She has spent weeks watching ­previews and helping to edit the footage at home in the US and is very hands- on with it.”

The corresponding Madame X album went to No2 and became her 22nd Top Ten album when it was released in 2019.

Her 75-date tour included intimate venues in ten cities where fans were banned from using their phones.

That clever trick means the documentary will be the only way to see footage from her show.

Madonna has released DVDs of her last few tours but given it’s an ­outdated format now, this feels like a good move for her.

Beyonce, Lady Gaga and ­Taylor Swift have all done ­documentaries on Netflix in the past, with great results.

If anyone has proved they’ve still got the shock factor as an entertainer, it’s Madonna.

And I’m sure this special will be no exception.

LOURDES OF THE BLING

MADONNA’S daughter clearly takes after her mum when it comes to making sure all eyes are on her.

Lourdes Leon posed in these attention-grabbing shots as part of a spring/summer fashion campaign for Marc Jacobs.

The model, who has previously posed for Miu Miu and Converse, wore fake roses over her chest in one photo and showed how flexible she is in another.

She shared the images on her ­Instagram account, which caused a stir last month when she set it up.

When one person commented on an earlier snap, ­saying, “Your mother made a masterpiece called Hard Candy” – referring to Madonna’s less than spectacular 2008 album – Lourdes replied: “Your mother sucks wild d*.”

After another follower asked what her mum would think of her posts, Lourdes hit back: “Does your mom know u don’t wash ur a?”

The ability to deliver withering put-downs must run in the family.

Ed: What’s minus yours?

ED SHEERAN celebrated his 30th birthday yesterday – and the singer was in a generous mood himself.

He said he had dressed up as a pirate to celebrate the big day – then gave fans the best ­possible gift by promising to release his new album this year.

It will be Ed’s first full release since his 2019 record No.6 Collaborations Project.

Alongside a photo of his cake and a childhood photo of Ed dressed as a pirate, he wrote on Instagram: “About to chow down on Colin the pirate ­caterpillar – poor bloke.

“I’ll be back online with the 4th instalment in the series later this year, until then. XX.”

BRITNEY SPEARS will be the subject of a documentary podcast by the ­people who launched the #FreeBritney campaign.

The spotlight for the past couple of weeks has been on the troubled star and her conservatorship, which gives her dad Jamie power over her life and finances.

Following this week’s docu ­Framing Britney Spears, the podcast Britney’s Gram has announced its own investigation.

Hosts Babs Gray and Tess Barker said: “We’re just so excited to have a place to put all of this reporting that we’ve been working on for a couple of years.”

BEBE REXHA has accused the Grammy Awards of being corrupt, alleging that she hasn’t won a gong because she didn’t bribe the judges.

The singer’s Florida Georgia Line collaboration Meant To Be went diamond, meaning it is one of only 44 songs in history to sell more than 10million copies in the US.

However, it lost out at the Grammys in 2019, when Dan + Shay’s Tequila beat it to be named Best Country Duo/Group Performance at the ceremony.

During an Instagram Live, she ranted: “For me, it was like, if Meant To Be didn’t win the fing Grammy, I don’t expect to win a Grammy ever.

“Depends on how much money you have to pay to get those things. I’m guessing – because we didn’t do that s . . . I don’t understand the Grammy criteria, but I think low-key it’s about who’s paying off who.”

The Grammys have previously denied any corruption.

On why she is only speaking out now, two years after it happened, Bebe added: “The industry can be so dark and if you speak up and say certain things, people can f*** you over. It’s scary.”

Rita is brown under

RITA ORA did two weeks in quarantine after arriving in Australia but judging by this dodgy outfit, she’s still ­feeling a tad jet-lagged.

She wore the confusing combo of brown camisole over the top of a dusky pink dress to head out in Sydney ahead of a ­meeting with fellow coaches on The Voice Australia, which she has flown Down Under to film.

While her dress may not have made the best first impression, I’m sure Rita will have won over her co-stars straight away.

She met up with country star Keith Urban for a swanky dinner ahead of filming.

Rita has been juggling that job with the release of her new EP, Bang, which came out on Friday.

HE’S had the most successful career of the One Direction boys since the group went on hiatus in 2015 and Harry Styles still has the golden touch.

He was photographed earlier this month holding a £17.99 water bottle on the set of his upcoming film Don’t Worry Darling and it has since sold out.

Harry’s legions of fans crashed Bottled Joy’s US website because of demand and it is now out of stock on Amazon in the US.

Since the group took a break, Harry has amassed a £54million fortune, dwarfing that of Louis Tomlinson, Niall Horan, Liam Payne and Zayn Malik.

Anthony Joshua’s boxing firm is worth £110m after bumper year

Paris set to walk down isle

CONGRATULATIONS to Paris Hilton, who has got engaged to author Carter Reum after he popped the question on a private island on Saturday.

The socialite, who announced the news on her 40th birthday yesterday, said: “When you find your soulmate, you don’t just know it.

“You feel it. My love and I have been together since our first date and for my birthday, he arranged a special trip to a tropical paradise.

“As we walked to ­dinner along the beach . . . Carter dropped to one knee. I said yes, yes to for ever.”