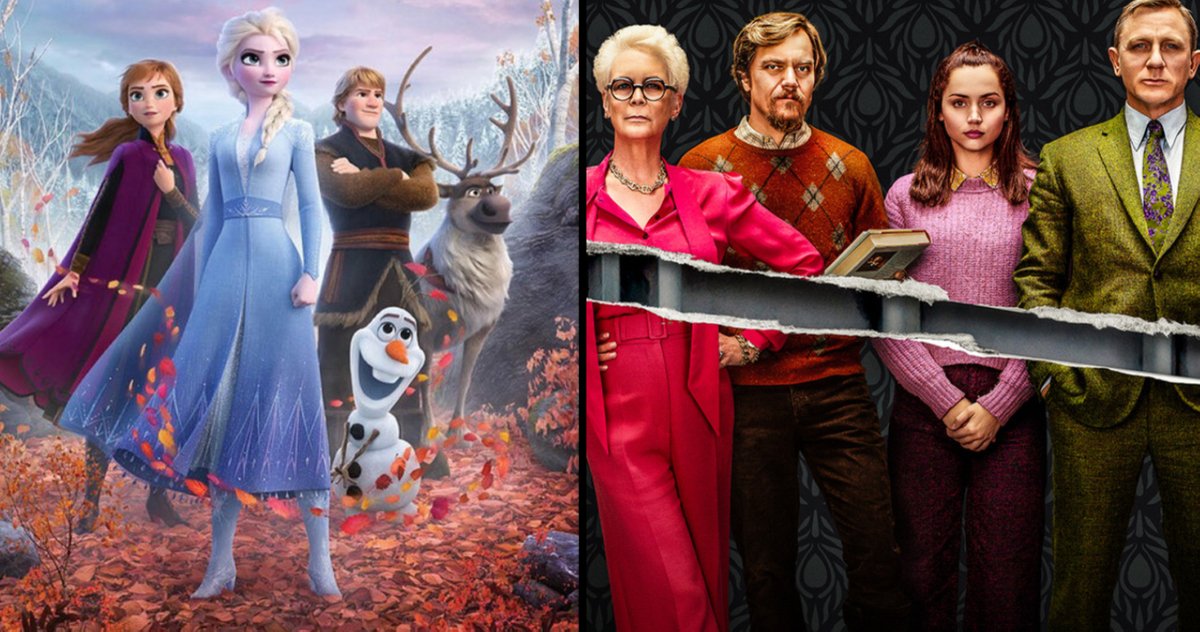 The Thanksgiving weekend box office will be another feast for Disney. The studio has had a record-breaking year at the box office that continued last weekend with the release of Frozen 2, which arrived with a massive $130.2 million haul. This weekend will see the arrival of a pair of newcomers in the form of Lionsgate’s Knives Out and Universal’s Queen and Slim. Both of which will do just fine, relatively speaking, but will come nowhere near taking the top spot away from Anna and Elsa.

Frozen 2 will easily win the weekend box office and dominate the Thanksgiving holiday frame. It’s expected that the animated sequel will take in between $70 and $80 million over the weekend, and as much as $120 million over the five-day stretch from Wednesday to Sunday. Couple that with the current global total, which stands at $358.5 million, and Disney has another huge winner on its hands. The sequel, directed by Chris Buck and Jennifer Lee, who return after helming the original, should have no trouble crossing the $1 billion mark in the coming weeks.

As far as newcomers go, Knives Out looks to have a solid debut over the holiday frame. The latest from director Rian Johnson (Star Wars: The Last Jedi) boasts a stacked cast that includes Daniel Craig, Jamie Lee Curtis, Ana De Armas, Christopher Plummer and Michael Shannon. So far, critics and audiences have responded kindly, with the murder mystery boasting a 95 percent approval rating on Rotten Tomatoes. That should all add up to a debut between $20 and $25 million, which would count as a win for Lionsgate, considering the $40 million production budget.

RELATED: Frozen 2 Set to Freeze Out the Competition with Record-Breaking Box Office Debut

Next up is Queen & Slim. Daniel Kaluuya and Jodie Turner-Smith topline this modern Bonnie and Clyde tale, which comes from director Melina Matsoukas, is expected to be a possible awards season contender. Critics have generally liked the topical drama, which boasts an 85 percent approval rating on Rotten Tomatoes. It’s expected to take in around $10 million, which isn’t a bad start, but it will need long legs to be considered a hit. Much of that could depend on how audiences respond and if that can generate strong word of mouth.

A pair of holdovers in the from of Ford vs Ferrari and A Beautiful Day in the Neighborhood will round out the top five this weekend. Both movies should be in the $7 to $8 million range, with the edge likely going to director James Mangold’s Ford vs. Ferrari, which stars Matt Damon and Christian Bale. Sony’s Mister Rogers biopic, which stars Tom Hanks as the children’s icon, has been met with a very positive response from moviegoers, which should help its holdover ability. Be sure to check out our full list of weekend box office predictions below and check back with us on Sunday for the weekend estimates. Numbers used in this report were provided by Box Office Mojo.