Caitlyn Jenner has been the A-list injection into this year’s I’m A Celeb.

Yet Thursday night’s show will see Hollywood further descending on to ITV screens, as Dwayne ‘The Rock’ Johnson and Kevin Hart will appear on the show in a pre-recorded message.

The stars, aged 47 and 40, teased their upcoming appearance in a first look Twitter video which saw them bicker about which of them would take on the parts of the show’s presenters Ant McPartlin and Declan Donnelly. 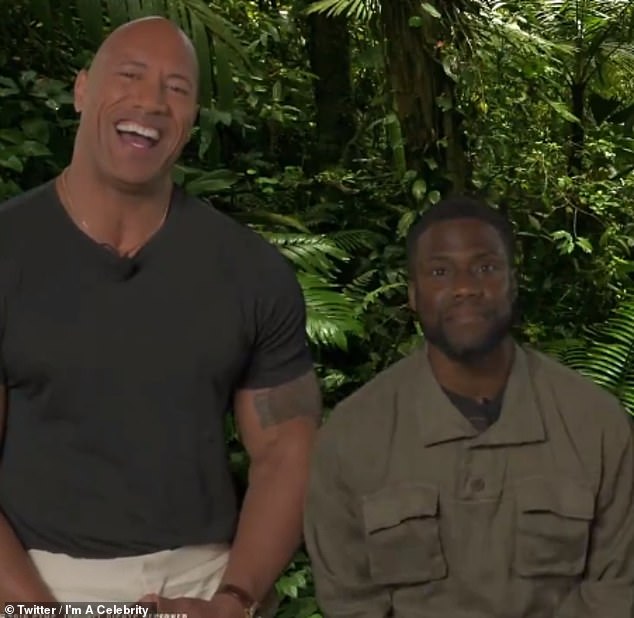 Funny: Dwayne ‘The Rock’ Johnson and Kevin Hart have given fans a tease of their appearance on Thursday’s I’m A Celebrity with a hilarious clip

In the teaser, it seemed that both Dwayne and Kevin were confused about which show they were supposed to be teasing.

First mimicking Ant and Dec’s iconic opening, the pair screamed: ‘I’m A Celebrity and Get Me Out Of Here!’

Correcting him Kevin quickly said: ‘Wait no I meant…’ before shouting with Dwayne: ‘Jumanji!’ 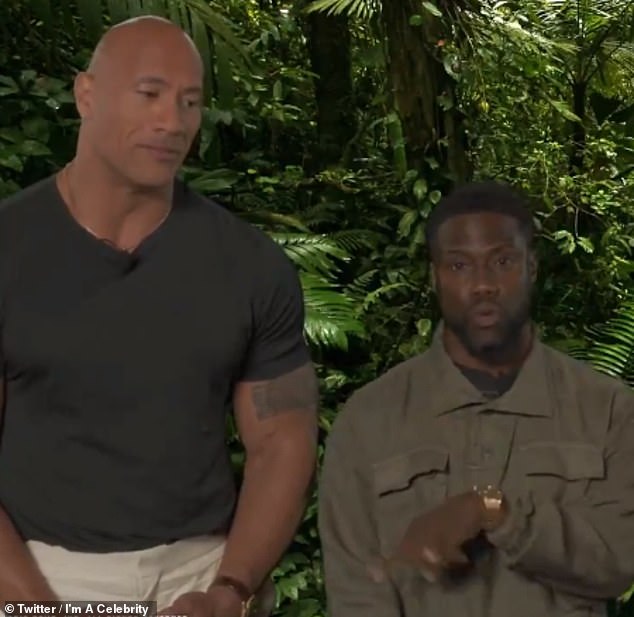 The Wedding Ringer star then asked which presenter he is supposed to be, to which Dwayne quickly responded: ‘Those guys are the great hosts… you are Dec!’

While Dwayne seemed to be poking fun at Kevin’s height, the actor quickly said: ‘Which one is the smart one? That’s me! I’m the smart one!’

As Dwayne insisted he is the ‘cool one,’ Kevin that he would prefer being smart over being cool any day. 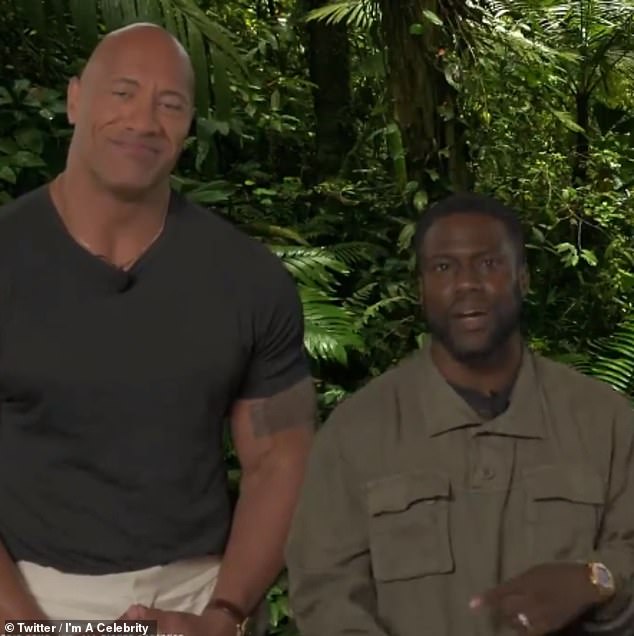 Like a married couple: As Dwayne displays his incredible pecs, Kevin claims: ‘That is dumb! If anybody’s looking for the definition of dumb it’s this! Can you put a brain in your pec?’

But the suave Hollywood star is still convinced he is the number one, and can’t resist flexing his famous pecs while saying: ‘Can they do that? Can they move their pecs?’

Kevin hits back: ‘That is dumb! If anybody’s looking for the definition of dumb it’s this! Can you put a brain in your pec? Can you do that?’

The teaser then ends with a quick glimpse at the trailer for Jumanji: The Next Chapter, along with news that an extended look will air during Thursday’s I’m A Celebrity. 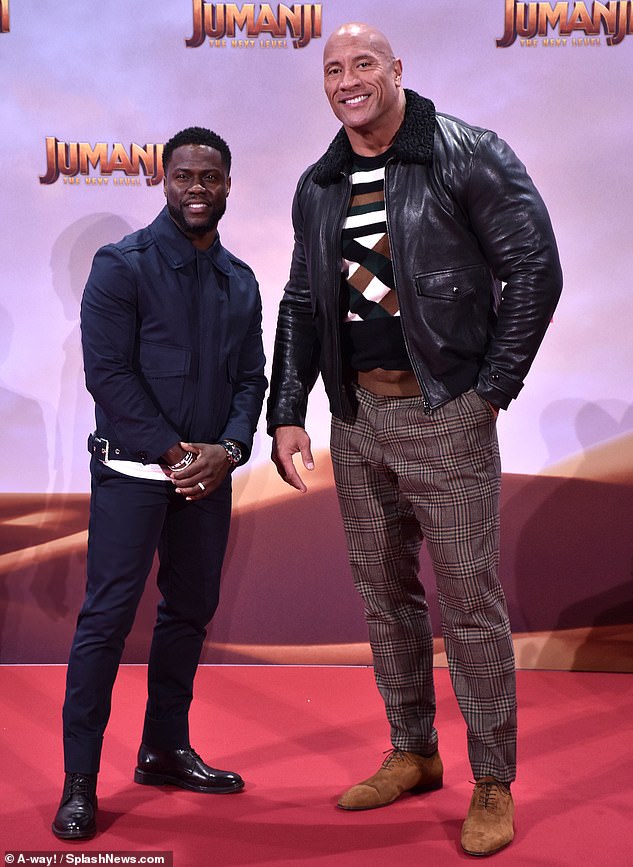 Wow: Thursday night’s I’m A Celebrity will see both Dwayne and Kevin make a surprise appearance in a pre-recorded message

Dwayne and Kevin are set to make a surprise appearance in the Australian jungle as part of a Jumanji-themed task in a bid to promote their newest film, and will reportedly see ITV rake in £1million in expected revenue.

The pair are going to grace screens as part of the Dingo Dollar Challenge which will be based on the upcoming movie.

Insiders told The Sun: ‘Dwayne Johnson will appear at the start of the challenge to brief the two celebrities via a pre-recorded video message with Kevin Hart. It is like nothing that has ever been done on the show’.

The appearance comes after Dwayne revealed his heart stopped’ when he heard about his friend Kevin’s car crash.

He struggled to catch his breath when he found that his co-star and close friend needed to have emergency surgery on his spine following the collision. 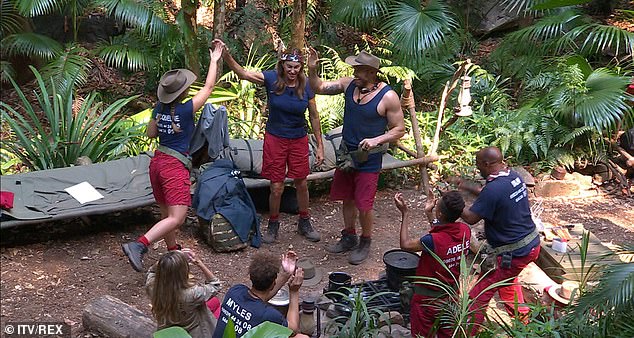 Yay! The stars are appearing as part of a Jumanji-themed task in a bid to promote their new film and will reportedly see the channel rake in £1million in revenue 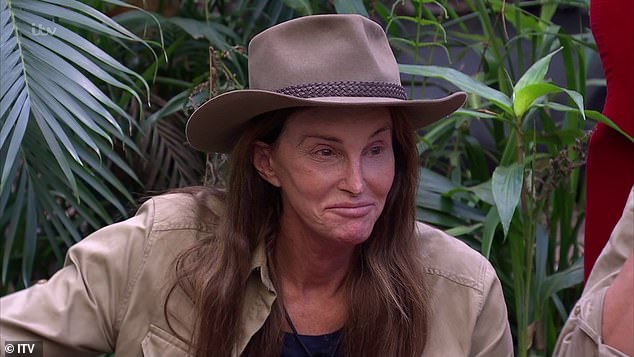 Superstar: Caitlyn Jenner has been the injection of A-list into this year’s I’m A Celeb

Back in September, the car Kevin was travelling in flipped and spun off the road nearly killing him. Clearly shaken by the scenario, he said: ‘His situation could’ve gone another way. He knows that, we know that…

‘When I heard the news, my heart stopped and I lost my breath. Kevin’s one of the good ones, he’s a good egg…

‘So I’m really proud of not only his ability to overcome, but we’re here, we’re in Cabo [promoting the film], we made Jumanji. Life is good. I’m happy that he’s here.’ 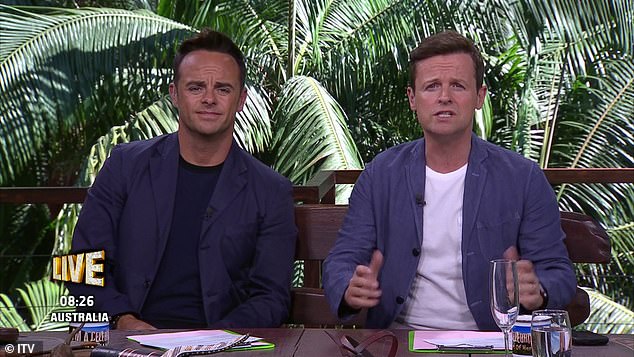 Surprise! Insiders told The Sun: ‘Dwayne Johnson will appear at the start of the challenge to brief the two celebrities via a pre-recorded video message with Kevin Hart. It is like nothing that has ever been done on the show’

Johnson was over the moon when he saw Kevin for the first time after his accident and they discussed how the comedian’s outlook on life had changed.

He recalled: ‘We hugged, we had a real strong conversation when he finally came back, face to face, about what this meant and how it had changed him.

‘It’s almost as if life and the universe takes this shade and lifts it from your eyes and you view the world a different way. It’s really beautiful.’

Kevin – who has Heaven, 14, and Hendrix, 12, with his ex-wife Torrei Hart and two-year-old Kenzo with his current spouse Eniko Parrish – appreciates life more now. 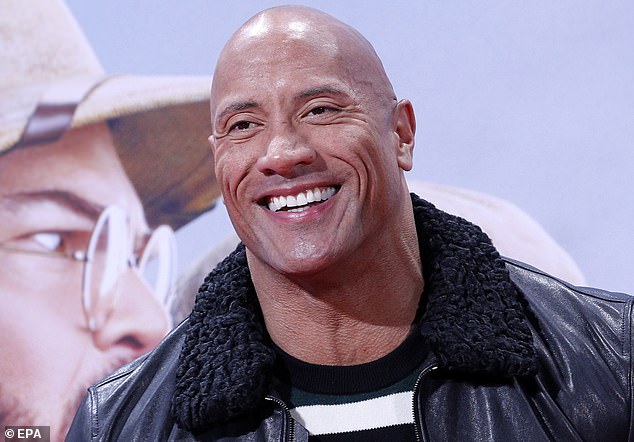 Check it out! Dwayne and Kevin are reportedly going to grace screens as part of the Dingo Dollar Challenge which will be based on the upcoming movie

Revolve Around the World: Shop the Japan 2020 Trip