A YOUNG woman was left stunned after finding a pair of dirty knickers on her seat after boarding a flight.

Rebecca Naish, from Amersham, was travelling with Virgin Atlantic when she found the pants on her seat.

The 36-year-old told Sun Online Travel: “I got on the flight from London Heathrow to Vegas on Saturday as I was heading there for the Licensing Expo.

“I went to sit down and there was a black pair of lacy pants on my chair – only on a flight to Vegas would you find that!

“The man next to me was horrified.

“I had to wait a while to get the flight attendants attention as they were boarding people.”

It isn’t clear who the knickers belonged to, although it was most likely a previous passenger.

Rebecca continued: “[A flight attendant] finally came over, so I showed her and explained.

“She then just picked them up (bare handed!) and took them away and apologised.”

Thankfully Rebecca found the funny side and sent the  pictures of the missing pants to her colleagues on the flight.

Social media users thought it was less hilarious, after Rebecca shared the image on Twitter.

Oh that’s so gross! – hope your flight gets better! Have a great week.

She posted a picture of the pants, writing: “Don’t think much of Virgin Atlantic’s new pyjama policy!”

One woman wrote: “Oh that’s so gross! – hope your flight gets better!”

Another remarked: “At least the seat is wipe clean.”

Virgin Atlantic replied to Rebecca on Twitter: “Hi Rebecca, I am so sorry that this was on your seat as you boarded the flight.

“Please make a member of the crew aware of this immediately.”

A spokesperson told Sun Online Travel: “We’re sorry to hear of Ms Naish’s experience on board one of our aircraft,  and would like to apologise.

HOL OF A DEAL

“We never want to disappoint our customers, and will be looking into this incident as a high priority.”

One woman was caught taking it one step further after deciding to dry her knickers using the overhead vents during a flight.

Another man stripped down to just his boxers during a flight – only for cabin crew to do nothing about it. 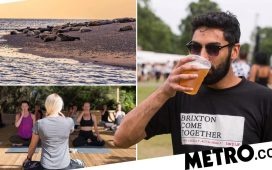