The US Navy has a new method for transporting supplies to off-shore submarines – drone delivery.

The military organization has successful delivered a five-pound payload consisting of circuit cards, medical supplies and food to the Virginia-class fast-attack submarine USS Hawaii (SSN 776) while at sea.

Delivering supplies by drone will eliminate the need for submarines to pull into ports for goods and allow them to spend more time in the fight. 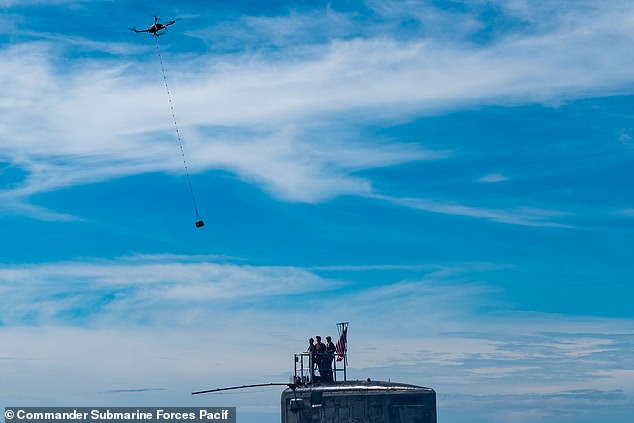 The military organization has successful delivered a five-pound payload consisting of circuit cards, medical supplies and food to the Virginia-class fast-attack submarine USS Hawaii (SSN 776) while at sea

This is the first time the US Navy has employed the use of a drone to deliver goods and Lt. Cmdr. Christopher Keithley, assigned to COMSUBPAC said ‘What started as an innovative idea has come to fruition as a potentially radical new submarine logistics delivery capability.’

‘A large percentage of parts that are needed on submarines weigh less than five-pounds, so this capability could alleviate the need for boats to pull into ports for parts or medical supplies.’

READ  The Guardian view on lockdown for Britain: true leadership is required | Editorial

The idea of using a drone was birthed one year ago in the Submarine Force Innovation Lab (iLab), which has since partnered with the University of Hawaii Applied Researcher Lab.

‘We are already seeing the impact that this one idea can have on the entire fleet.’ 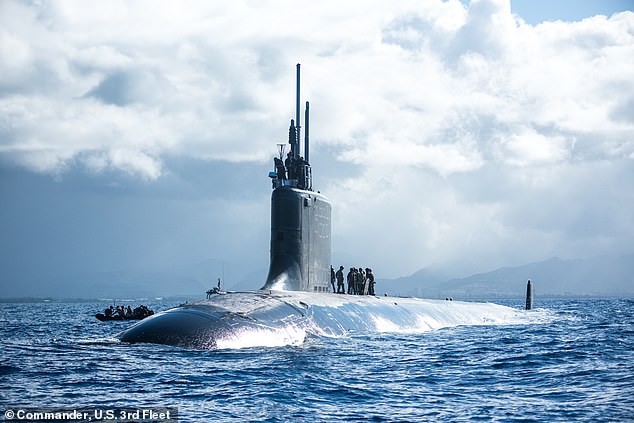 Delivering supplies by drone will eliminate the need for submarines to pull into ports for goods and allow them to spend more time in the fight. Pictured is the USS Hawaii (SSN 776)

‘The joint effort between the Sailors at COMSUBPAC and the University of Hawaii has resulted in delivering necessary supplies to submarines that can save time and money, allowing us to stay in the fight.’

A week-long training station was held for submarine sailors stationed at Pearl Harbor.

Those who volunteered became proficient drone pilots and developed the concept of converting an unmanned aerial vehicle and submarine sail into a package delivery and receiving platform.

‘Members of University of Hawaii Applied Research Lab worked alongside COMSUBPAC Sailors to develop a ‘snag’ pole and payload release mechanism from the drone, practicing the concept using the prototypes on the back of trucks and jeeps,’ said Keithley.

‘As the training progressed and the drone innovations became more reliable, the team was able to demonstrate the capability onto a small patrol boat out of Pearl Harbor.’

After final adjustments and last minute training, the team assembled on the shore of western Oahu and flew a small five-pound payload over a mile offshore to USS Hawaii.

‘The snag pole and drone delivery mechanisms performed perfectly as the payload of parts was safely delivered onboard the submarine, making history as the first ever drone delivery onboard an underway submarine,’ said Keithley.

‘I am very proud of the joint effort and the capability they have created out of nearly thin air.’

‘The success of this project is a true testament to the ingenuity of our team and I am very thankful for them and our submarine Sailors, who volunteered their time to make it a success.’

Don't stand so close to me! The new rules of social distancing