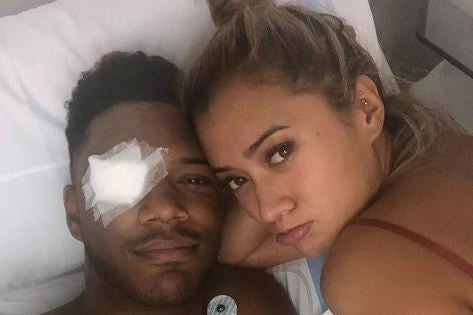 Theo Campbell has said he “does not want to believe” his right eye is gone forever after being blinded after a freak accident in Ibiza.

The Love Island 2017 contestant, 28, revealed yesterday he lost his sight in one eye after a champagne cork split it in half.

He posted a image of himself in hospital with girlfriend Kaz Crossley, 25, and revealed he had lost sight in one eye.

Campbell, who was previously an athlete who has represented England, said the doctors warned him it was unlikely he will see again but added “anything is possible”.

Writing on Twitter this morning, he said: “Just wanna say thanks again for all the love and support. There’s been 100x more than I imagined. I haven’t had a chance to read all the messages yet but they’re much appreciated.

“I currently have seven stitches in my eye (gross) and the doctors say it’s unlikely I’ll see properly again. They done a good job saving it as they said I might lose my whole eye to begin with.

“But I’m hopeful and don’t want to believe my eye is gone forever. Anything is possible.”

Crossley, who was a finalist in the 2018 Love Island series with ex boyfriend Josh Denzel, flew out to see him and is currently by his bedside.

She has since posted an update detailing how the accident happened.

Crossley earlier revealed her heartache at the incident, writing on Instagram: “It’s been a hard 24 hours, no one here speaks English and he was taken for hours at one point and I had no clue he was in surgery again.

“I’ve stayed in his room overnight and just wanna take him home. He’s so brave and positive hopefully it will get better. Thanks for your kind messages.

“I hope this will make people aware of the dangers at these parties and to be more careful,” she said.

Prior to the incident, Campbell posted several images of himself on holiday with friends.

It is not clear which party the athlete was injured at.

READ  Fans pen tributes to The Chase's Bradley Walsh mistaking him for dead actor Bradley Welsh
Share on FacebookShare on TwitterShare on PinterestShare on Reddit
newsgrooveAugust 28, 2019