The most fascinating museums around the world opening in 2021 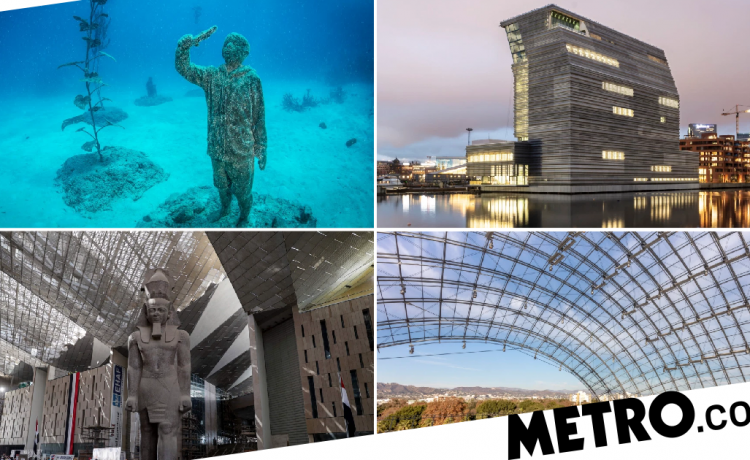 When was the last time you stepped inside a museum? Thanks to lockdown, it’s been a while since any of us got to properly soak up some culture.

Even though you can’t visit them quite yet, prepare to be blown away by the incredible museums that will be opening their doors for the first time this year.

From the wonders of Ancient Egypt to a underwater art gallery at the Great Barrier Reef, a trip to one of these museums is almost certainly worth the wait.

Given that it was first announced in 1992 and has since been postponed more times than Brexit, it’s best to take the Grand Egyptian Museum’s current pledge to debut in mid-2021 with a pinch of salt.

More guaranteed is that the massive site – bigger than the Vatican City – will astonish whenever it does open.

Inside an eye-catching triangular, translucent stone facade will be all 5,400 objects from Tutankhamun’s tomb, including the boy pharaoh’s golden throne and funerary mask, plus tens of thousands more artefacts detailing Egypt’s incredible history, thematic gardens, a children’s museum and a 3D cinema.

No, not a museum dedicated to snacks, but one that fittingly honours Norway’s most famous artist, Edvard Munch.

Most famous for endlessly memed painting The Scream, he was incredibly prolific and in this striking, contemporary glass-and-steel building on Oslo’s waterfront, which is due to open this summer, you’ll be able to view a collection of 1,500 paintings and more than 18,000 prints.

With 11 exhibition halls spread over 280,000 sq ft and 13 storeys, it will be one of the biggest museums in the world dedicated to a single artist.

If you’re the type who can’t wait for the release of this year’s ultimate monster blockbuster, Godzilla Vs Kong (out on Wednesday), you’ll already be booking your flight to Japan to experience the new Godzilla Museum.

Complete with props, dioramas and 80 figures from past films, it will serve as fine accompaniment to what is actually the main attraction on Awaji Island in the Hyogo Prefecture (90 minutes’ drive from Osaka): an anime theme park that will include a giant model of the genetically modified lizard, with a zip line you can ride straight into his mouth.

It helps if you know how to dive – or at least snorkel – as a majority of the exhibits in this unusual museum-cum-gallery are submerged 60ft (18m) below the ocean’s surface along the Great Barrier Reef, off the coast of Townsville.

Created and designed by British artist and sculptor Jason DeCaires Taylor (who has also opened something similar in Mexico), the aim is to explore the issue of climate change and its impact on the reef, as well as funding conservation and reef recovery projects.

The sculptures are a series of human figures modelled on children from local and international schools, named, aptly, ‘coral guardians’, while one exhibit is a 16ft-tall sculpture above the surface which changes colour according to the increase in water temperature.

As revealed by Tom Hanks at last year’s Oscars, the Academy’s long-awaited museum is finally set to say ‘Lights, camera, action!’ on September 30.

Its design sees starchitect Renzo Piano revamping a former department store and the stated aim is to thoroughly explore the movie business.

For all that, visitors are far likelier to come simply for the various wonders on show: from Jaws’ lone-surviving shark head mould and an extraterrestrial headpiece worn in Alien to those ruby slippers from The Wizard Of Oz and an original Cinerama camera. Also enticing are exhibitions and film Q&As.

Goodness knows we could all do with a bit of extra happiness after the past 12 months so props to Copenhagen for opening – mid-pandemic, no less – a museum that aims to help people understand more about this elusive concept.

Here you can find out where your homeland ranks in the happiness stakes (the UK is apparently 15th in the world, beating the US and, er, South Sudan, while Denmark is often called the happiest country on Earth), learn what contributes to a country’s overall wellbeing (clue: excellent healthcare and free education rate highly) and browse an exhibition of ‘artefacts of happiness’ – a range of things that represent joy donated by people from all around the globe.


MORE : Barks and recreation: The best pet tech 2021 for your furry friend


MORE : Hold on to your forks – there’s a new pasta shape in town

READ  Hotel secrets: Insider reveals wearing this item can get you a free room upgrade
Share on FacebookShare on TwitterShare on PinterestShare on Reddit
newsgrooveMarch 29, 2021