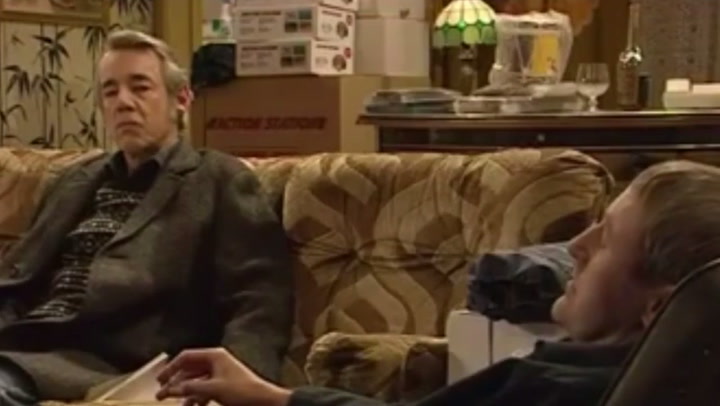 Only Fools and Horses: Rodney listens to Mozart with Trigger

Roger Lloyd Pack earned a fortune after starring as Trigger in the comedy classic Only Fools and Horses.

The late star died of pancreatic cancer in 2014 and left behind £1.5 million, but he didn’t have a will.

His estate was shared between his widow Jehane Markham and his four kids – who included actress Emily Lloyd and his sons Spencer, Hartley and Louis.

However, some of his co-stars didn’t manage to earn as much as the Trigger actor.

The star’s fortune was shared between his widow and children

Details of his financial estate have not yet been released.

Following his death aged 79, his family released a statement saying: “It is with heavy hearts that we bring you such sad news.

“Our dear friend and yours, John Challis, has died peacefully in his sleep, after a long battle with cancer.

“He will always be loved for being ‘Boycie’ and leaves a great legacy of work that will continue to bring pleasure and smiles for many years to come.

“Please respect the privacy of John’s family and friends at this difficult time, and be assured that in the future there will be an occasion to celebrate John’s life – when everyone will be welcome to come along.”

Other iconic actors who starred in Only Fools and Horse include David Jason who played Del Boy.

Sir David has was knighted for his services to acting and comedy in 2005 and has even won four BAFTAs, four British Comedy Awards and seven NTAs.

He appeared as Detective Inspector Jack Frost until retiring from the role in 2010 and has also starred in Granville, Open All Hours and The Darling Buds of May.

Other stars include Nicholas Lyndhurst, Tessa Peake-Jones and Sue Holderness.

Buster Merryfield, who starred as Uncle Albert, was introduced into the show after Lennard Pearce died.