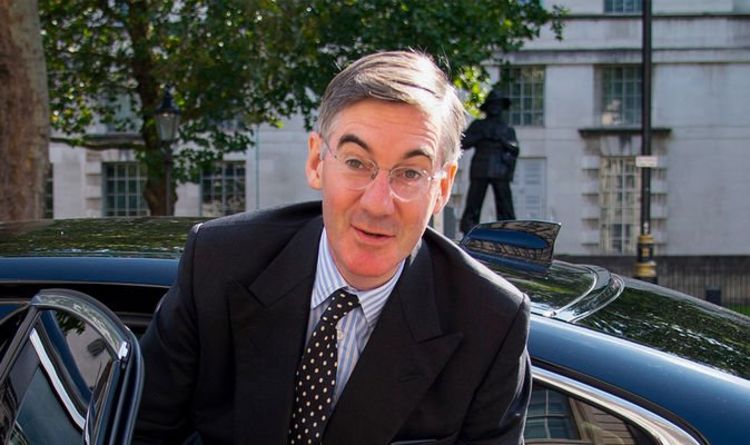 Mr Rees-Mogg flew to Balmoral alongside Baroness Evans, the Leader of the House of Lords, and chief whip Mark Spencer, to formally ask Queen Elizabeth II to prorogue Parliament. The proroguing is expected to last five weeks in which all Parliamentary business will be suspended. Writing in the Daily Telegraph, Mr Rees-Mogg said: “There is no constitutional crisis except that caused by those who voted for the referendum, then supported the use of Article 50 and backed the Withdrawal Act.

“Every one of these had comfortable Parliamentary majorities, often backed by those who now cry out that following a plebiscite is undemocratic. This is untrue and unconstitutional.”

He said the resulting Queen’s Speech will be “a challenge for those who accept the 2016 referendum but reject its result”.

Prime Minister Boris Johnson rejected the notion Brexit was the reason behind his decision.

Mr Johnson said that conclusion was “completely untrue” and that he required a Queen’s Speech to set a “very exciting agenda” of domestic policy.

He insisted that should he manage to agree a new withdrawal agreement with Brussels around the time of the European Council summit on October 17, he would be able to bring forward legislation to bring this deal forward.

He explained: “There will be ample time on both sides of that crucial October 17 summit, ample time in Parliament for MPs to debate the EU, to debate Brexit, and all the other issues.”

The original plan before Parliament was prorogued was for the lower house to sit for the first two weeks in September then break for the party conference season.

Previously, MPs considered voting against leaving for their conferences in order to debate Brexit.

In a letter to MPs, Mr Johnson said EU leaders were observing developments in Westminster and “it is only by showing unity and resolve that we stand a chance of securing a new deal that can be passed by Parliament”.

Work and Pensions Secretary Amber Rudd tweeted: “Ruth Davidson is a wonderful talent and person, and we owe her a tremendous debt for turning our fortunes around in Scotland.

“Our Party is a better one with her in it and I hope she will continue to contribute to public life.”

The Scottish Tories hold 13 seats in Westminster and 31 seats in Holyrood.

They are the official opposition is Scotland.

Former attorney general Dominic Grieve has admitted he would be prepared to bring down the Government to prevent no deal: “I think there are a number of colleagues who have said exactly the same thing”.

The former Chancellor Philip Hammond said it would be “profoundly undemocratic” if “Parliament were prevented from holding the Government to account at a time of national crisis.”

Former Tory and now Liberal Democrat MP Sarah Wollaston tweeted: “Johnson behaving like a tin pot dictator. Time for ministers to resign & Conservative MPs to cross the floor rather than be tainted with this outrage.”

Party leader Jo Swinson herself tweeted: By suspending Parliament to force through a No Deal, Boris Johnson and the Government would remove the voice of the people. It is a dangerous and unacceptable course of action which the Lib Dems will strongly oppose.”