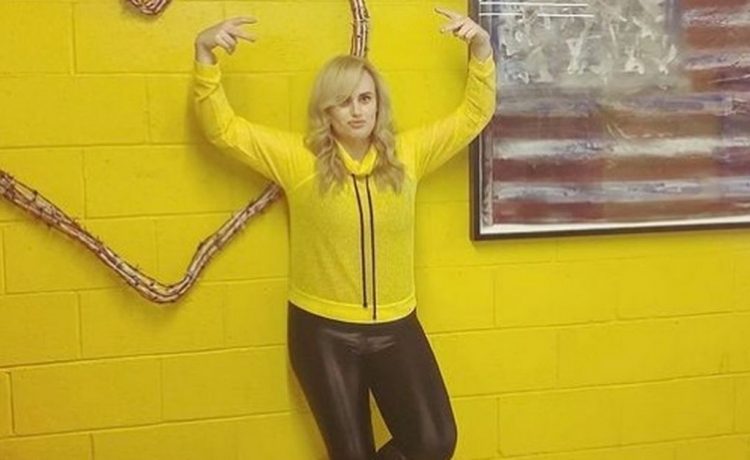 In recent weeks, the actress spilled she had split from her billionaire ex-boyfriend Jacob Busch after four months of romance.

No signs of heartbreak were on show as the  single star beamed for a slew of photographs shared on Instagram.

Rebel, 40, has become an inspiration to many of her 9.6million followers after she lost 4.7 stone as a result of her exercise regime and strict diet.

The Australian-born beauty caught the eye in a neon yellow jacket while she prepared for her tiring workout with her personal trainer.

They were working hard for a live Zoom workout over the weekend.

A wheel of three photographs captured the workouts.

Alongside the snaps, she wrote: “Normally my workouts with @gunnarfitness are top secret because we talk about way too many personal things but today we got to live Zoom one with the help from our friends at @ollywellness.”

Rebel had been romancing Jacob for four months after the couple met through a mutual friend in 2019.

During their time together, the actress would often share photographs of them together following their red carpet debut.

The comedian admitted she started dating her boyfriend before she had begun her health kick as she told her followers “you don’t have to be a certain size to get a boyfriend”.

She had previous written of their relationship last year: “He’s a very private person, so I don’t like to give away too much in that department.”

She added: “But I will say we dated before I started any of this health journey, as well as now.

“So that goes to show you, ladies: you don’t have to be a certain size to get a boyfriend.”

More recently, Rebel divulged she had dropped 4.7 stone by working out and keeping to the VivaMayr diet of 1,500 calories a day.

The diet plan, from the exclusive Austrian wellness centre of the same name, improves gut health by cutting down on snacking and eating fibre-rich foods.

Rebel said on Drew Barrymore’s CBS talk show: “For the last few years, I’ve been theme-ing my years. So, I had the ‘Year of Fun,’ last year was my ‘Year of Love’, and this year it’s going to be the ‘Year of Health’ because I turned 40 this year in March.

“I never really focused on my health, which was probably obvious. I was going all around the world jet-setting everywhere, and eating a ton of sugar. That was kind of my vice.”

Previously, Rebel talked about how she had gained four stone with emotional eating in her 20s during a tell-all interview with Ant Middleton for Straight Talking on Sky.

She said: “I start gaining all this weight and I’m like, you know what’s good for bigger girls? Comedy.

She added: “I like to think that I look good at any size I’ve been.”