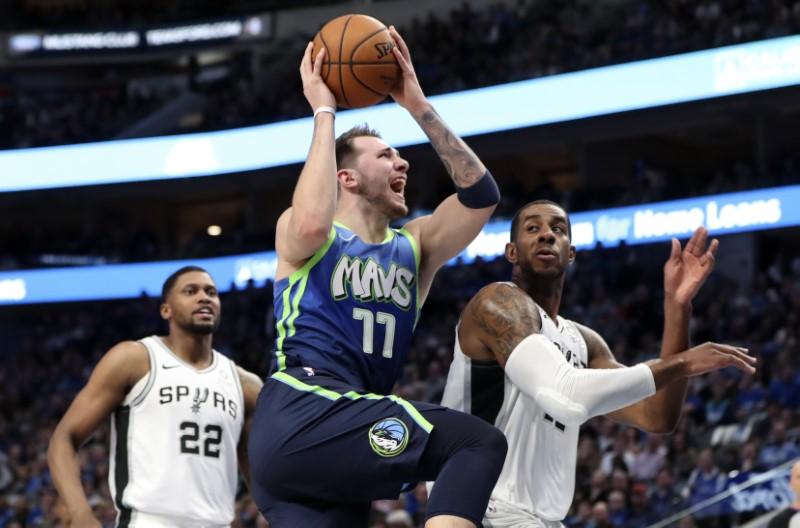 Luka Doncic scored 24 points, grabbed 10 rebounds and distributed eight assists in his return to the lineup after missing four games to help the Dallas Mavericks hold off the visiting San Antonio Spurs 102-98 on Thursday.

Dallas led by five points entering the fourth quarter and by just 82-79 after a layup by the Spurs’ Patty Mills with 10:11 to play. However, the Mavericks turned up the heat. Kristaps Porzingis made consecutive 3-pointers, and Dallas later went on a 14-2 run that featured two treys by Dorian Finney-Smith and one apiece from Delon Wright and Jalen Brunson, stretching their margin to 17 points.

The Spurs made a final surge, scoring the final 13 points of the game, but they could not climb all the way back, falling to their Lone Star State rivals for the second time in two meetings this season.

Doncic, who had been out with an ankle injury, picked up right where he left off, leading the Mavericks with 13 first-half points. Tim Hardaway Jr. finished with 17 points for Dallas, which has won nine of its past 13 games. San Antonio got 21 points from DeMar DeRozan and 18 from Rudy Gay.

Frontcourt mates Jaren Jackson Jr. and Jonas Valanciunas combined for 41 points, the Memphis bench added 46, and a strong second half powered the Grizzlies to a win at Oklahoma City.

Jackson continued his hot scoring touch of late, posting 20 points for his 13th 20-plus-point outing of the season. Valanciunas scored 11 of his team-high 21 points in the fourth quarter, including three straight buckets in a stretch that pushed the Memphis lead from 12 to 20 points.

Oklahoma City, which came in on a four-game winning streak and a winner of seven of nine, was led by Chris Paul, who posted game highs of 23 points and 11 assists.

Julius Randle scored 33 points as New York pulled away in the second half to top host Brooklyn.

The Knicks halted a four-game losing streak to the Nets and improved to 4-6 under interim coach Mike Miller in a game they led by as many as 23 points.

Spencer Dinwiddie scored 25 points, but the Nets fell to 12-7 without Kyrie Irving (right shoulder impingement). Dinwiddie was 5 of 15 from the floor as the Nets shot 26.9 percent and missed 37 of 50 3-point attempts, while no other Brooklyn player scored in double figures.

READ  Fulham signing Andersen out for weeks with ankle injury
Share on FacebookShare on TwitterShare on PinterestShare on Reddit
newsgrooveDecember 27, 2019