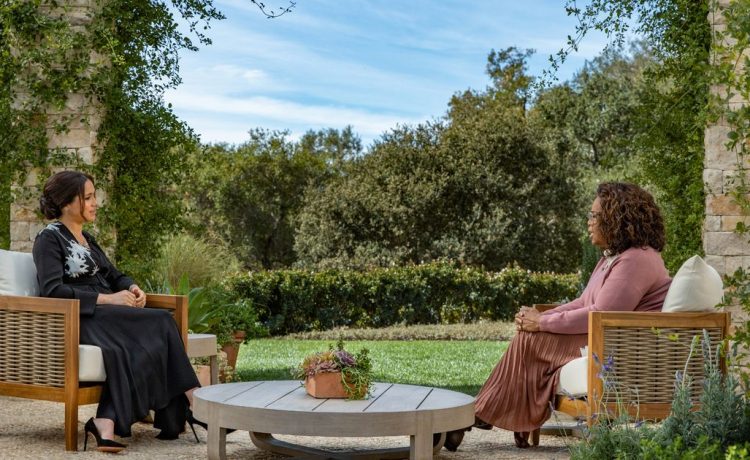 Meghan Markle’s tell-all interview with Oprah appears to have been predicted before she and Prince Harry even got engaged.

Two months ahead of Meghan’s official engagement to Harry in September 2017, Meghan was interviewed by Vanity Fair where she spoke of their ‘great love story’.

Meghan spoke of the time about her transition from a relatively unknown actor in TV drama Suits to becoming a member of the Royal Family.

She spoke of being introduced by a mutual friend to Harry and dating him for a year before it became publicly known.

During the chat, Meghan insinuated even then, that she was considering telling all about her Royal romance and becoming a member of the Royal Family,

The Duchess of Sussex said at the time: “We’re a couple. We’re in love.”

“I’m sure there will be a time when we will have to come forward and present ourselves and have stories to tell, but I hope what people will understand is that this is our time.

“This is for us. It’s part of what makes it so special, that it’s just ours. But we’re happy. Personally, I love a great love story.”

Her comment to Vanity Fair came four years before her and the Duke’s explosive interview with Oprah which sent reverberations around the Royal Family.

It’s sure to being more scrutiny from those who have been affected by the chat and will no doubt raise more questions.

While Meghan seems to have felt that she needed to chat about her life before marrying Prince Harry, her Suits co-star and friend, Abigail Spencer, praised the future Duchess at the time she was interviewed.

Abigail said: “She’s got warm elegance, though her style is hard to pin down. It’s classy and timeless.

“When you’re talking to her, you feel like you’re the only person on the planet. And it’s just wonderful to see her so in love.”