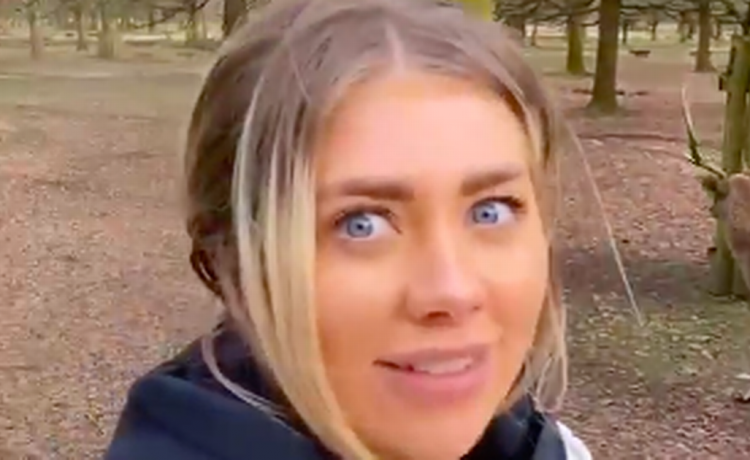 Love Island Scot Paige Turley admitted she was scared stiff after she encountered a stag on a day out with her footballer boyfriend Finley Tapp.

Lewis Capaldi’s ex and boyfriend Finn decided to go out for the day to a local country park and explore some wildlife rather than stay cooped up in their Manchester flat.

But Paige wasn’t really prepared for getting up close with nature – prompting speculation that she wouldn’t be able to handle telly shows like I’m A Celebrity.

The couple headed off to the Dunham Massey National Trust for their big day out – and even took a packed lunch with them.

The Georgian house in Trafford, near Altrincham, Greater Manchester, boasts a garden for all seasons and an ancient deer park.

Dunham’s much loved fallow deer have been part of our estate since the park walls were built in 1748, and they roam freely around the parkland.

If you take a walk around the wider park, you’ll almost certainly see them munching on grass or reaching up to eat the low hanging leaves.

In March when they lose their antlers guests are encouraged to take any they find home with them.

But Paige got more than she bargained for when a stag wandered over to her, leaving the Scots native shrieking.

With Finn filming the encounter, Paige can be heard screaming: “He’s coming right for us, what the f***?”

She later wrote: “They had no fear. I on the other hand. Best leave Sir Attenborough to the wildlife broadcasting.”

Finn, who looked like he was enjoying one of the pasties they took with them for a packed lunch, took everything in his stride and joked: “No Ideer what he’s doing here. Do you want a cappuccino?”