LEONA Lewis has tied the knot with her long-time lover Dennis Jauch.

The singer and former X Factor victor married dancer and choreographer Jauch in a fairytale wedding in Italy on Saturday.

The pair said their vows in front of 180 relatives and pals in a romance-filled open-air ceremony.

Leona wore a stunning full-length white gown that draped behind her as she walked down the isle to the soundtrack of the classic orchestral tune ‘Ave Maria’.

The star then went on to flout a summery beaded blush dress for the reception and a glittery jumpsuit for a boozy evening party.

Among the lucky guests were founding Sugababes member Keisha Buchanan, and The Voice UK’s 2014 winner Jermain Jackman sang for the crowds.

Leona said she was “bursting with joy and overcome with emotion” when she got engaged to Jauch last November.

But the loved-up pair, who live together in California, had their eyes on each other as soon as they met in 2010 when Jauch was a backing dancer on Leona’s debut concert tour.

Ahead of the wedding, Lewis told the magazine: “We’re so ready to do this. Dennis is the most kind, considerate person I’ve ever met. He’s been my rock through my crazy ups and downs and everything I’ve gone through in my life.”

Only last month Leona built the hype for the big day itself when she splashed £8,000 a night on a fun-filled luxury Hawaiian hen do.

She couldn’t hide a cheeky smile when she posted on Instagram from the Pacific island clad in a rose dress with peachy ‘Bride’ balloons in June.

Leona rose to fame after winning the X Factor in 2006 and releasing her hit ‘Bleeding Love’, and has had two number one albums in the UK, and nine top 10 singles.

In 2016 she made her Broadway debut as Grizabella in Cats, and earlier this year starred in American crime series The Oath. 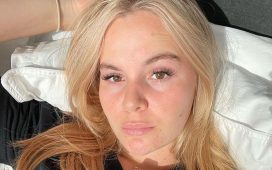