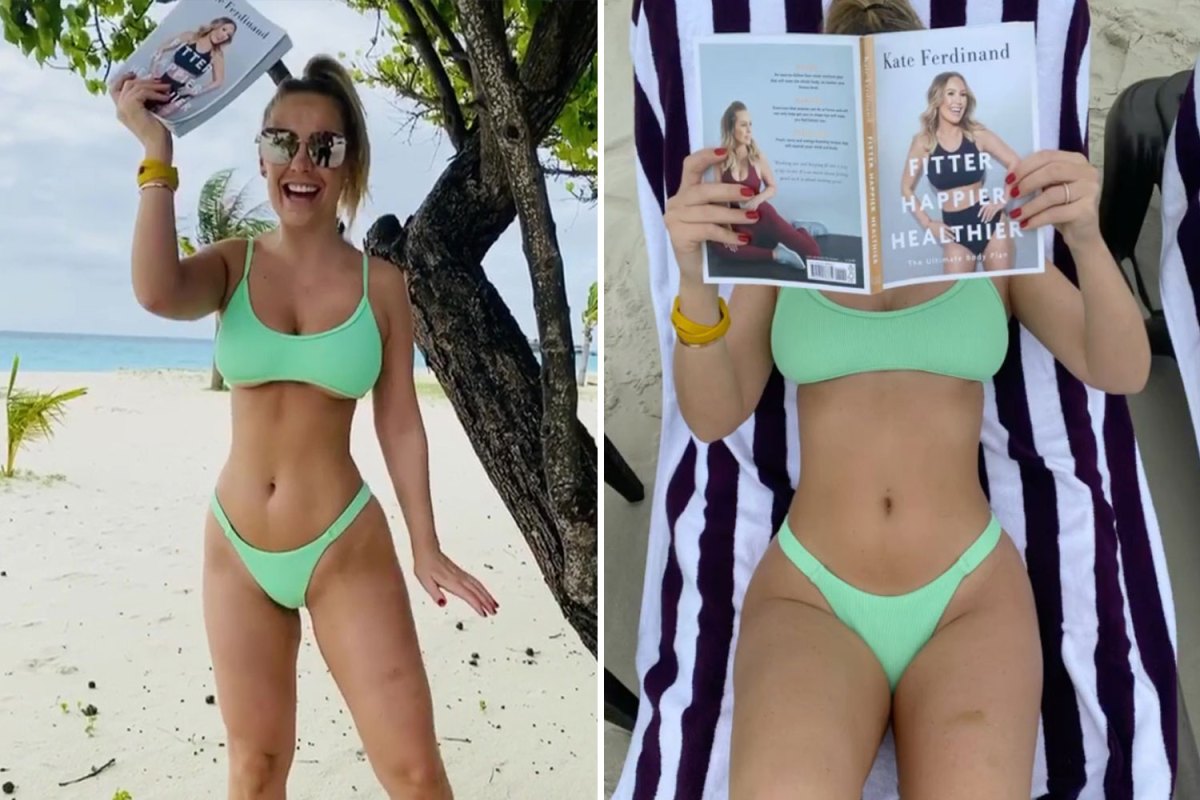 KATE Ferdinand looked incredible in a green bikini as she launched her new fitness book from the beach.

The 28-year-old beauty went away for Christmas with husband Rio Ferdinand and his three kids, 13-year-old Lorenz, Tate, 11, and eight-year-old Tia.

But in-between spending quality time with her family, Kate couldn’t resist the opportunity to plug her new book.

The former Towie star took to Instagram to share a Boomerang video of herself in the tiny two-piece as she triumphantly holds ‘Fitter, Happier, Healthier’ in the air.

Kate is showing off her washboard abs and even a hint of underboob in the skimpy bikini, which she has teamed with oversized sunglasses and bracelets.

The star added in the caption: “Ahhhh, the day is finally here – my book is out.

“You can buy it in stores and in the link in my profile! Fitter, Happier, Healthier …. how you can become all three.”

She also shared a snap of herself laying on a sun-lounger reading the book, with the cover concealing her face and her toned body front-and-centre.

The posts came shortly after Kate wowed her followers with this year’s Christmas Ferdinand family portrait.

The fivesome pulled out all of the stops for a new group photo, with the star even comparing their efforts to last year’s snap.

Kate first shared the 2018 image, which featured Rio’s sons doing handstands on the sun-soaked beach while his daughter showed off her gymnastic skills with a bridge in front of the two grown-ups.

The next photo showed the group in the same stunning location this Christmas, with Tia sitting on one of her brother’s shoulders.

Rio is holding onto her arm as well as one of his son’s arms – which is wrapped in a blue cast.

Kate is showing off her enviable figure in a red bikini, grinning at the camera.

“Merry Christmas everyone. Hope you have all had a fabulous day, lots of love.”

Rio, 41, shared the same image and wrote: “Wishing everyone out there a very merry Xmas!”

Kate and Rio met in 2017 and married in September in an emotional ceremony in Turkey.

The former England footballer was previously married to the mother of his three children Rebecca Ellison, who died of cancer in 2015.