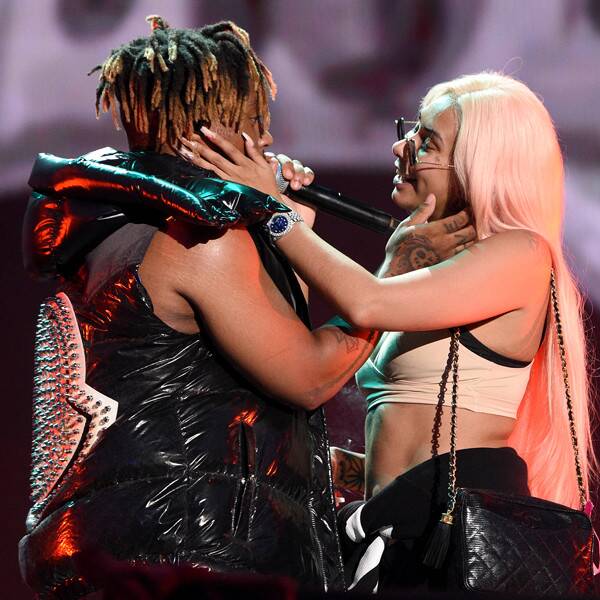 Juice Wrld‘s girlfriend is mourning the loss of the late rapper.

On Sunday, Ally Lotti delivered a moving tribute to the “Lucid Dreams” singer, whose real name was Jarad Higgins, at the Rolling Loud Festival, one week after his tragic death.

“I just wanted to come out here and let everyone know that Jarad loved every single person that he helped on this earth,” she told the crowd, holding back tears as images of Juice Wrld played on the screen behind her. “He literally loved every single one of you guys. There is not a time when he had shown me any different love then he felt for you.”

She continued, “He wants everyone to know that you need to take any negative, any negative thing in your life, he would tell you every time he saw you and change that to a positive situation.”

Lotti’s emotional speech comes two days after she broke her silence on Instagram. Posting a video of the “Legends” rapper on stage performing, she captioned the clip, “i love you ‘endlessly.'” They had been reportedly dating for over a year.

Juice Wrld passed away on December 8 after suffering a seizure at Chicago’s Midway Airport. He was 21. What caused the fatal seizure is still unknown at this time, but new details regarding the circumstances of his death have emerged.

Officers that arrived at the scene disclosed that when the rapper began convulsing, he was administered two doses of Narcan by one of the plane’s passengers, which included Lotti. She told police her boyfriend didn’t suffer from any medical ailments but that he regularly takes Percocet and “has a drug problem.”

Five days later, the rapper’s family and friends gathered in Harvey, Ill. for a private funeral. According to TMZ, Juice Wrld’s loved ones paid their respects and gave eulogies honoring his memory.

In a statement to TMZ, Juice Wrld’s mother Carmella Wallace said that she hopes her son’s death can help those who “struggle with addiction.”

“Addiction knows no boundaries and its impact goes way beyond the person fighting it,” she told the outlet. “Jarad was a son, brother, grandson, friend and so much more to so many people who wanted more than anything to see him defeat addiction.”

Several artists have paid tribute to the “Bandit” rapper, including Lil Pump who said that he’ll be working on his sobriety in the new year. He shared on his Instagram Story, “No drugs 2019. Or 2020. It’s over for that.” Nicki Minaj also honored Juice Wrld, who opened her 2019 The Nicki Wrld Tour, while accepting The Game Changer Award at the 2019 Billboard Women In Music Event.

“And I want to tell everyone that ‘drugs isn’t the problem’ isn’t the way we fix our problem,” the “MEGATRON” rapper said. “So, it’s so important that we don’t pass judgment, so that people don’t feel ashamed to speak up and ask for help. It’s so important that we talk about mental health. It is. Because people are dying because they don’t want to express how miserable they are and how much they’re suffering, so they’d rather medicate themselves.”