This week Joe Wicks has cemented himself as the absolute God of fitness in the UK, with his PE with Joe YouTube series raking in millions of views in a short number of days, bringing welcome respite amid the anxiety of the coronavirus pandemic.

There is a reason he’s been dubbed the ‘Vera Lynn of the nation’, you know.

Known as The Body Coach, Joe, 33, has been kicking about for years, finding fame for his workout videos and his massively popular Lean in 15 cookbooks and recipes.

Hustling to get his name out there in the early days, the father-of-two has long-documented his less-than-glamorous upbringing, and tough foray into the fitness sphere.

Far from a childhood rooted in fitness, Joe had previously admitted he grew up on a council estate and his single mum had ‘no idea about healthy eating’, feeding the family on a diet of pasta and sandwiches each night – ‘and lots of chocolate’.

He once revealed he’d borrowed £2,000 from his parents in order to purchase some dumbbells – before trying to promote his business by handing out fliers to commuters.

Now – look at him: Joe is said to be worth £14.5million and boasts a fitness and wellness empire with over 3.2m Instagram followers and nearly 2m YouTube subscribers. And two networks, Channel 4 and BBC, knocking on his door wanting to broadcast his workouts on their channels.

After studying sports science at St Mary’s University in Twickenham, Joe set his sights on becoming a PE teacher. However after that fell flat, he turned his hand to personal training and classes.

But only eight years ago Joe was handing out flyers for his Richmond bootcamps, Rumble In The Park, outside tube stations – and not getting many takers.

He once admitted that for a period no one turned up to his classes and one year he failed to make a single pound from his fitness business in 2012.

Joe previously told The Mirror: ‘I remember I was really upset because I didn’t have any clients and I thought I’d never be able to pay my parents back.

‘But I loved personal training, I instantly thought, “This is what I’m supposed to be doing,” and it all accelerated from there.’

In 2014 Joe took advantage of the video function on Instagram ahead of the curve of other influencers and began posting his workouts online.

It didn’t take long for people to gravitate to his energising and excited 15-second videos in which he’d whack a bunch of ingredients into a pan, well you to whizz it up or chuck it in the oven (‘and that right there, is lean in 15!’).

A year later, he launched his first cookbook, aptly-named Lean in 15 – which 77,000 copies in its first week, smashing all sorts of records.

He’s gone on to publish a further six books, including a Veggie Lean in 15 and another focusing on 30 minute meals, should you have a little more time up your sleeve.

Less than six years after beginning to build his social media reach, his Body Coach HQ, in Richmond, employs a reported 50 staff and turns over millions each year.

‘I took my mum to the office for the first time the other day. When she saw the building, she was so proud she cried,’ he previously told The Express.

‘My mum, dad and nana can’t believe I’ve got this proper global company. Neither can I.

‘Sometimes I go in and think ‘I’m the bloody boss!’

Not just relegated to the world of bootcamps and cookbooks, Joe has crafted a 90-day plan that aims to turn bodies into rippling piles of muscles in three months – if they follow the £126 package to a tee.

And people gobbled it right up, with reports claiming in 2018 he’d shifted more than 110,000 tailer-made packages to people looking to get lean in…90.

Similarly acing his personal life, Joe is married to model Rosie Jones, 29, and the pair have two kids, Indie, one, and three-month-old Marley.

Indie is clearly following in her dad’s footsteps after today crashing his PE with Joe class and showing us all how to squat.

We smell a family business on our hands…

Still ever humble, it’s evident the man hasn’t let wealth go to his head as he continues to preach the same healthy mantra.

He said of his newfound financial position in 2018: ‘I’ve got a nice house, but I’m not extravagant. When you come from a family that’s never had money, you’re more sensible with it.

‘Buying watches and cars isn’t going to make you happy in the long run.’

READ  Oscars 2020: From World of Warcraft to conducting the ceremony orchestra 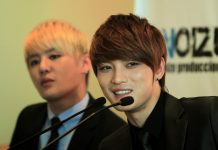