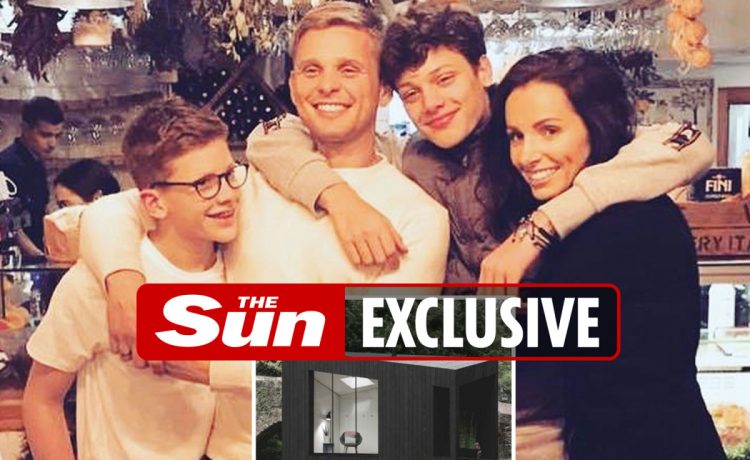 JEFF Brazier has submitted plans to turn a caravan into a private bar as part of garden makeover at his Essex mansion – complete with a mediation zone nestled in a tree-filled corner.

The Sun Online can exclusively reveal the 41-year-old wants to create an entertainment area for parties at his luxury pad and an outdoor office so he and PR expert wife Kate Dwyer can work from home.

Yet the life coach will also balance this out with a zen meditation space perfect for enjoying some quiet time at his pad, housed in the grounds of a former poultry farm.

Jeff also wants to build a potting shed in a mini allotment and wildflower meadow and has applied to his local council for three outbuildings.

In a letter to planners, he said: ‘Hey, I’m self-employed and work mostly from home, my wife is now looking likely to be working from home indefinitely and with my children, 15 and 17, both studying full time, it seems that I would create a workspace in our garden area.

‘We unfortunately have a klargester for the whole development at the bottom of our garden and it would be nice to conceal that out of view as an added benefit!”

Plans exclusively seen by The Sun Online show the celebrity has asked the council if he can build the office between his house and the sewage tank, to mask its view

The images show the sleek work space would be constructed from stained cladding boards and feature huge floor to ceiling windows with a roof light.

The wider garden plans show the meditation area will be nestled in a greenery of trees and foliage.

Jeff and Kate will be able to seek solace there with a good distance from the astro training areas and entertainment spaces.

The dad of two, who shares sons Bobby and Freddie with now-deceased Jade Goody, bought the £867,000 four-bedroom pad in 2019 and has previously been given the go-ahead to add a kitchen and garage extension.

Planners at Epping Forest Council are expected to make a decision on his latest plans in May and there have so far been no objections from neighbours.

Meanwhile, Jeff and Kate, whom he married in 2018, have been keeping their fans up-to-date with the family’s expanding home with a new Instagram page.

Images show the Essex pad in full glory since they began its makeover in August 2020.

Recently the TV favourite took to his own page to share some snaps of their new kitchen, which he described as the “engine room of the house,” where his family all come together.

He told his 146k followers: “We followed the bedroom with taking the risk of going slightly darker than usual but we’re really happy with the result! In daytime we get so much light in the room which is probably why we get away with it.

“@katebrazierpr has a thing for brass hardware so we’ve managed to do everything but the kitchen taps.

“Went for a little bit of yellow and we’ll add some wall art and find some better stuff for the shelves to finish it off. Can’t wait for the summer so we can get the bi-folds open!”

Jeff had the help from interior designer Samantha Pope to sort out 17-year-old Bobby and 16-year-old Freddie’s rooms.

Bobby’s bedroom is simple yet stylish throughout, with a cream colour scheme and green chair.

And his brother’s room is the coolest of them all and has a bright neon astronaut light hung up against navy walls.

The presenter and qualified life coach, 41, recently exclusively told The Sun Bobby, 17, and Freddie, 16, were struggling at home despite having the tools to weather the pandemic better than others after the trauma of losing Jade when they were just five and four.

He fears the pair will be left “without happy memories” after the coronavirus lockdown heaped more stress on the duo following their bereavement.

He said: “Their resilience does come from their tragic experience of losing mum.

“Whatever it is, they’ve got something that’s helped them.

“They’ve had to develop that resilience, that patience and that sense of, ‘right, what can I do in order to keep myself busy’ which they wouldn’t have otherwise had.

Sophia Peschisolido stuns in ‘all white everything’ wearing lacy lingerie

“Those skills, those traits might come in handy at a later date.

“When they’re able to socialise and mix with their friends properly I’ll be so pleased for them – and all kids, really – because it’s hard on everybody.

“This is their childhood. Imagine when they’re 20, 30 years older and their main memory of childhood is the 10-11 months they spent literally doing nothing. It’s very sobering.”