I’m A Celebrity… Get Me Out Of Here! returns on Sunday. Here’s a preview of the stunning Carden Park hotel the celebrities are treated to after they are evicted from the castle 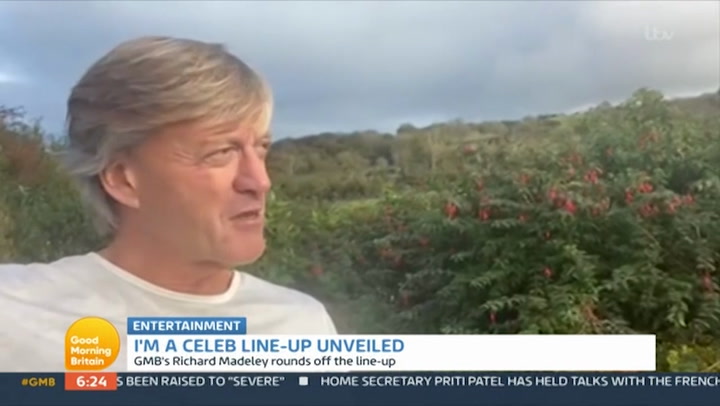 I’m A Celeb: Richard Madeley says he can’t wait to get started

I’m A Celebrity… Get Me Out Of Here! 2021 starts this Sunday – and it’s back with an exciting new line-up of stars.

Those who are throwing themselves into possibly one of the hardest challenges of their lives include Frankie Bridge and Richard Madeley.

TV duo Ant and Dec will return to historic Gwrych Castle in freezing north Wales to present the star-studded show, as the Australian jungle is out of use for a second year running.

Despite facing unpredictable weather temperatures and gruelling Bushtucker Trials, the celebrities are given a taste of luxury at a posh hotel stay after they leave the castle.

While in previous years celebrities were treated to Australia’s Palazzo Versace Gold Coast, bosses are likely to ensure that this year’s stars also get a taste of luxury.

According to Ross King, who last year revealed the news on Good Morning Britain, celebrities booted off from the show are driven the border into Cheshire where their luxury stay awaits.

“It certainly beats the castle, doesn’t it?!” King said about the lavish hotel.

The stars get to spend one night at the lavish property before being taken home.

The four star hotel is just over an hours drive from Gwrych Castle and offers stunning views over 1,000 acres of Cheshire countryside.

The rooms on site are certainly a far cry from the cold night’s sleep that the celebrities endured at Gwrych Castle.

Some of the location’s most luxurious suites also offer their own lounge areas, well stocked fridges, an endless supply of coffee and an enormous bath to soak in.

There’s also a TV should the stars want to keep up to date with the remaining I’m A Celeb campmates.

There is also an award-winning restaurant on site run by head chef Graham Tinsley – and there aren’t any creepy crawlies in sight.

Carden Park Hotel also has several bars on site and plenty of rooms to choose from for a perfect night’s stay.

If the stars really want to put their feet up, the former contestants can also head to the £12million spa facility on site that offers a host of pricey treatments and massages.

In the past, stars have enjoyed a stay at The Palazzo Versace hotel.

The five star hotel, which is just a stone’s throw away from the £7million I’m A Celebrity camp, is described as the “definition of luxury, glamour and sophistication”.

Carden Park Hotel has stunning rooms for the celebrities
(

Palm trees frame the sweeping driveway to the opulent hotel.

Guests are greeted by spectacular and stately columns with large windows making sure they can enjoy the stunning sea views.

The sunshine of the Gold Coast pours through the airy windows in the bedrooms and suites while spa baths and private balconies offer extra touches of luxury.

The balconies overlook the giant well-lit swimming pool that snakes through the sprawling waterfront complex.

They are usually treated to a stay here
(

It is an ideal place for the stars as it is a short drive from the I’m A Celeb jungle campsite in part of Australia’s Springbrook National Park.

Rooms set guests back £275 a night for a basic room in mid-November, according to prices on the hotel’s website, while the more glamorous Imperial Suite is up for grabs at around £1,000-per night.