I never knew how inextricably and wonderfully common I was until I met my partner – or rather, his family.

Like most UK towns and cities, there’s a posh part and a rough part: he comes from the former and I from the latter. As a child, I didn’t grasp that others would consider my situation to be “deprived”, just because we holidayed once a year (all-inclusive), had a flat-screen TV and a “minimal” home interior, which basically meant bare. As mum proudly put it, we were the “best on our street”.

It wasn’t until I met my first boyfriend, who callously dumped me after five days upon finding out I lived on a council estate, that I realised I would be judged in life, according to my class.

Growing up, my cultural diet consisted of films and books that romanticised inter-class relationships, making them seem straightforward and rarely complicated. I began to believe that, as a working-class woman, “marrying up” was the ultimate path to freedom from a life of unpredictability, hardship and stigma.

After 10 years of hypergamy, however, I’m afraid to say it’s testing my confidence, relationship and identity. I’m having a bit of an existential crisis. I no longer conform with my roots, yet cannot grasp my future. I’m in a lonely and exhausting form of class limbo.

I remember one evening, early on in the relationship, when I lunged headfirst into the treacherously deep water of my in-laws’ home. I was naively unaware of middle-class lexicon and blissfully innocent to the rules of the room. The minute I opened my mouth to speak I became suddenly conscious of my broad northern accent in a way I hadn’t before. It echoed around the room, darting from one end to the other like some sort of unsightly graffiti splatting and staining the walls. I immediately adopted a smoother and less regionally identifiable voice.

READ  My life in sex: the woman with HPV

Like any lie, you are doomed to see it through to the end and, of course, I still speak in a fake and frankly preposterous accent whenever we visit the in-laws. Our four-year-old asked recently: “Why are you talking like that mama? You don’t talk like that at home.”

Middle-class people aren’t trying to make us feel uncomfortable. It’s not as if there’s a little red book detailing the “dos and don’ts” of social climbing and excluding others. It’s a learned behaviour, passed through generations and lovingly preserved by matrimonial sameness. Instead, it wasn’t until I was in my 20s that I learnt there is a specific spoon made solely to eat soup, and it blew my mind. The shame and embarrassment that washed over me in public as I was about to tuck into my meal, only to be made aware that I hadn’t yet learned the language of cutlery, made me feel small and infantile.

Then there’s the unrelenting obsession, to the point of fanaticism, placed on education. Every toy, every experience and every game must be intellectually nourishing to a child’s brain (and don’t forget wooden, not plastic). The advantages of this are so obvious that when my own mother buys something perfectly innocuous like a poop emoji farting toy to make my son laugh, I wince at its lowbrow nature.

You’d imagine that the past year would have afforded me the space to shake off societal constraints, sitting comfortably in my ever-expanding sweatpants, but along came the family WhatsApp group chat. While it must be said that the chat has been both a source of mutual support and love, it has also laid bare our differences. I asked, “Should we have a movie/BBQ night in the garden?”, to which my mother-in-law replied, “No, sounds like the worst idea I ever heard.” A tad direct I thought, but I admire her ability to speak with such forthrightness. The capacity to be herself. The freedom that comes with being middle class, to simply say, no. The confidence to be who she is.

My relationship with my partner has grown throughout the years, but I often wonder how much of myself has been thrown away at its expense. On the one hand, it’s easy to make the assumption that, as my circumstances change, so too will my personality and customs. Or that in some way, my surroundings will alter my outlook on life. Yet in my heart of hearts, I feel like an imposter, navigating my way around a world that I’ll never fully understand. 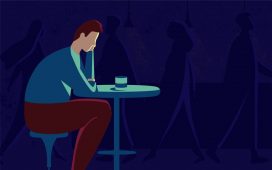 How I learned to connect with my male friends

How we met: 'I was terrified my parents would find out I’d been intimate with another girl'

My mum loves me, but doesn’t really know me | Dear Mariella

Phil Elverum's songs of loss gave me a language for that shapeshifter, grief

'It's been a slog': Joy as loved ones reunite amid easing of England Covid rules

How we met: ‘I fancied her, but she was jabbing a needle into my ribs’