How we met: ‘She gave me what I call the electric hug. I felt my hair stand up’


‘We got to the front of the pack and sped off,” says Kate. She and Sue had reached the highest point on one of the highest motorable roads in the world, in the Ladakh region of northern India, and were alone for the first time. “It’s a tough bike ride to do – it’s not just a gravel path, they are like boulders,” says Kate. “So the adrenaline was flowing, but I was also chuffed because I was on my own with Sue. I was like a teenager.”

They had met at a hotel in Delhi 10 days earlier, in July 2015, where nine of them had gathered for an all-women motorcycle trip. Neither made much of an impression on each other – they just got on with the trip, riding all day and meeting at hotels and camps in the evening. It was in Leh, northern India, where they had stopped for a couple of days before the final, highest leg of the journey, that Sue and Kate got talking. “We had more time to hang out, have a beer, get to know each other,” says Kate. “That was the point at which I started to think: ‘Oh bugger, I think I fancy her.’” She laughs. “Sue was adventurous, keen on biking, gorgeous. Also, she can be a bit of a tough cookie, initially, and I like a bit of a challenge. I found that mysterious and appealing. When we started chatting, she was great fun.”

Sue hadn’t thought of Kate in that way, except to mention to a single friend on the trip that Kate was also single and attractive. “She is adventurous, travel-loving, smart, and she has that wonderful British wit,” says Sue, who is from the US. “And I thought she was cute.”

Although it was romantic up there on that road alone – they slid down snowbanks and threw snowballs at each other – Kate didn’t make a move. “I knew Sue was single, but she hadn’t given any indicators that she was looking for anyone, or interested in me. We had started to get on really well, but I assumed that those feelings were one-sided – and if they weren’t going to be reciprocated, I didn’t want to risk spoiling the trip.”

A few days later, everyone was hugging goodbye at the hotel in Delhi. Kate says: “I stood next to her thinking: ‘That can’t be the last hug – I need to do that again.’”

Sue continues: “I was about to walk out the door and she comes back over and gives me what I call the electric hug. I felt the hair stand up on my head. It was such an intimate moment that I looked around thinking: ‘Did anyone see that?’ I spent the entire trip back to the airport thinking: ‘Oh my God, I think I’m attracted to Kate and I left her in India.’”

Sue headed back to the US and Kate came home to the UK. They messaged each other for a couple of weeks, then started video calling; soon they were talking for several hours a day.

In December 2015, Kate flew out to the US. “We’d already decided that we were going to give it a go at being a couple,” says Sue. When she picked up Kate at the airport, the feeling “was instant”, she says. Kate adds: “From that point on, it was perfect.”

They had agreed that airport arrivals was not a suitably memorable place for their first kiss. “So we walked out to my car hand in hand,” Sue remembers. “And then I couldn’t wait any longer.”

Kate stayed for nine days, then they began a two-year long-distance relationship, meeting up every eight weeks. When Kate left her job, she spent a couple of months in the US, where they got engaged, then applied for a visa. “After two years, I needed to know what was happening,” says Sue. “We needed to be together or starting the process of getting together, because it was just too hard.”

Last year, they were married by one of the women on their motorcycle trip; another friend from the trip was maid of honour, as was Sue’s adult daughter. They are planning lots more motorcycle adventures.

Want to share your story? Tell us a little about you, your partner and how you got together by filling in the form here.

My wife will have me home after an affair, but I long for more | Ask Philippa

I’ve seen everything as a counsellor. But Couples Therapy still has me gripped

Blind date: ‘There was a slight mix-up between Drake and Francis Drake’

The unbearable likes of being friends with an influencer: ‘We felt like her servants’ 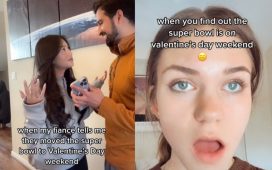 ‘Magikkun’: the Korean buzzword that explains why dating apps are restricting pictures with masks

How we met: ‘None of my Indian friends had girlfriends. But I liked her too much to say no’