How Oasis' Definitely Maybe 'changed everything' 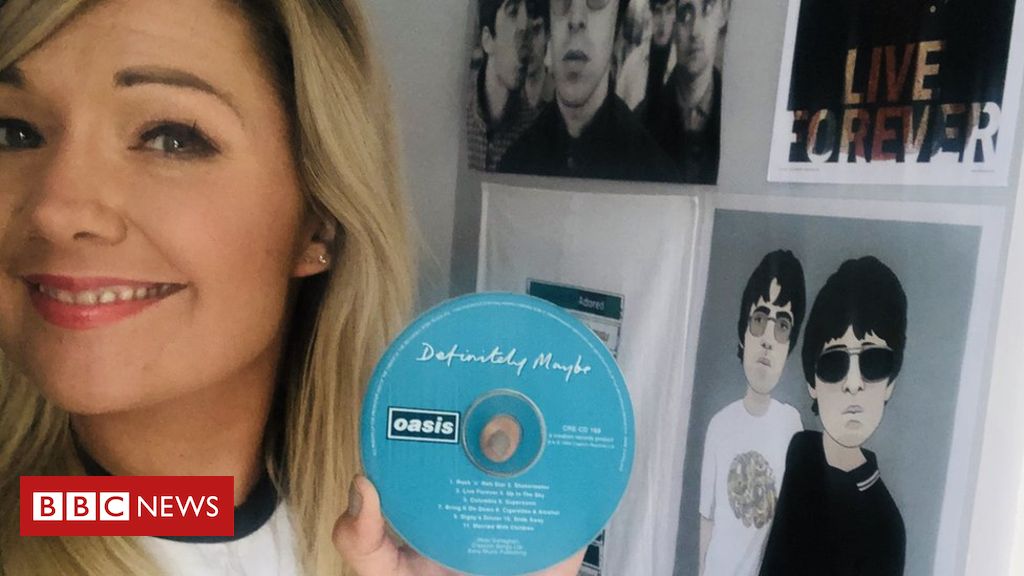 On 24 August 1994, Oasis released their debut album Definitely Maybe to critical acclaim and supersonic success. It would become the UK’s fastest-selling debut album and shift more than eight million copies worldwide, making the band the rock and roll stars they wanted to be.

At 14 years old, it “changed everything” for Anna Southword.

“I remember first hearing them on [BBC Radio 1’s] Evening Session… the raw energy, attitude and self-belief that shone through was like nothing I’d heard before.

“I couldn’t wait to buy it the day it came out. The anticipation was seriously exciting and I vividly remember going to the Virgin [shop] with my dad and whisking it off the shelf.”

She was living in Shrewsbury at the time, but says the album “took me back to Manchester where I had moved away from”.

“The Gallaghers reminded me of the life I knew my dad had had in Manchester. It defined my teenage years and it has been the soundtrack of my life,” says the now 39-year-old.

“It evokes memories of youth and I have loved introducing it to my children – I listen to it today and it feels timeless.”

Samantha Shiner was a child when she first heard the album.

“I would have been six, coming up to seven, but I do remember my dad used to take us up the pub all the time and it always being on.

“Being six, I didn’t appreciate it as much, but I really got into them as a teenager and I always went back to that album. Even now, I’ve had it in my car for the last six months on repeat.”

She says the album’s “arrogance and swagger” is as powerful today as it was 25 years ago and still capable of inspiring people.

“Everybody wants to be Oasis – and Definitely Maybe is the reason why. It was such an important album for British music and it’s still inspiring youngsters to pick up a guitar and become a rock and roll star.

“Me and my friends did a Twitter poll recently, trying to find the best Oasis song – we had 600,000 votes in our final poll, which shows how important they still are.

“They’re just as relevant as they were 25 years ago and that album… everyone still loves it just as much.”

For Michael George, the album was a rite of passage.

“I was 12 when Definitely Maybe was released. I was beginning to look for my own style in life and I had two paper rounds, so I had a few quid to spend at weekends.

“We had two record stores in our town back then and me and my friends would go in and take a look at the latest releases on a Saturday.

“One week, there it was, Definitely Maybe. I had the money, bought it and biked home to give it a listen – and that was it, I was hooked.

“The easy lyrics made it a great album to sing along to and the band had a swagger and style that was a kind of arrogance which I loved – Adidas trainers became a must and I had my own little Liam strut.”

He says the album has “stood the test of time” and has been taken to heart by his own children.

“My 13-year-old daughter is now at the stage of trying to find an identity and a musical taste and she has moved my record player into her room.

“I’ll hear the sound of Rock ‘n’ Roll Star starting up, which instantly reminds me of my first listen of Definitely Maybe and I can’t help but sing and dance around with my air guitar and fake drumsticks.”

Dan Grabham was 15 when the album came out and so worried about not getting a copy on the day of release that he had it reserved for £1 at his local record store.

“Smaller stores would get a quite limited allocation of albums, so I guess they were expecting a lot of demand.

“By the time it came out, a lot of the tracks had already been out – I’d bought Shakermaker as a single on a school trip and several of the songs were well-played on Radio 1.

“My mates used to come to my house after school and we listened to a lot of so-called Britpop – bands like Suede, Gene, Blur and Inspiral Carpets – but it was clear early on there was something different about Oasis.

“They were so confident and obviously the songs are brilliant. That confidence was empowering and at the time it was just really thrilling to listen to.”

He says that 25 years on, it remains a “special album”.

“Obviously Oasis were massive after, and were equally as thrilling – I went to Knebworth, which was a real ‘I was there’ moment – but Definitely Maybe is different from later stuff, probably because it was recorded when they were nothing.

“I think it’s still up there with the best debut albums ever and still sounds fresh.

“There aren’t any duff tracks on it.”