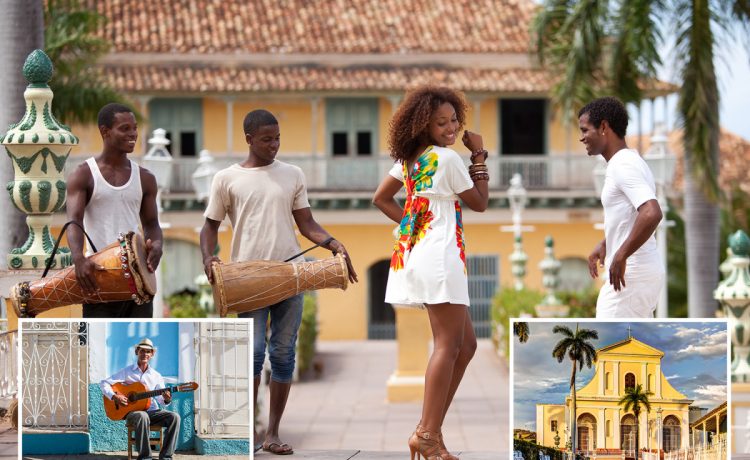 HOLED up in a bar in the Cuban town of Trinidad, I sip a mojito and listen to a nearby church bell ring nine times.

On the final peal, the salsa band waiting patiently in the square below begins to play.

Locals gather on the cobbles to dance, and I drink in this happy, carefree scene, fuelled by rum and music. In Cuba, one is rarely without the other.

If it was not for the chimes from La Santisima church, you’d think the clocks had stopped around the year 1850 in this Unesco-listed heritage town.

Sitting pretty in central Cuba, it is one of the best-preserved former Spanish colonial towns in the whole of Latin America.

Pony and traps clip-clop lazily past, ladies sell lace on the street and old-man bands strike up lively salsa.

“Together, we are age 319,” the frontman of a five-piece salsa band tells me cheerfully, shaking his maracas.

I have only been in Trinidad for a day and I’m smitten. Casa Barmarin, a traditional house just off the town’s main square, can be rented by the room or booked in its entirety.

With its exposed brickwork and original, faded frescoes, the feel is beautifully bohemian.

Breakfast — home-made cakes, smoothies and eggs in any style — is served by host Edelys in the small courtyard garden, where a chameleon entertains my three teenage sons each morning with a colour-changing show.

Trinidad’s historic heart is small enough to explore on foot and we begin at Plaza Mayor, climbing the yellow bell tower of Iglesia San Francisco for epic views over red-tiled roofs to lush mountains on one side and a sliver of coast on the other.

Museo Historico is housed in the former home of a sugar plantation owner who, rumour has it, was poisoned by his wife and her lover — and it is the best place to get an overview of how Trinidad became so rich, from a sugar trade fuelled by slave labour.

The next day we motor out in style in a yellow 1957 Oldsmobile — Trinidad, like Havana, is awash with vintage cars — to the Unesco World Heritage Site of Valle de los Ingenios, a graveyard of 70 former sugar plantations.

Wind in our hair, it feels like a jolly, but then the mood changes as we walk the foundations of the slaves’ houses and listen as Adolfo, our guide, describes the misery that was suffered here.

I am glad his stories are not sugar-coated for my sons, who are quiet as we climb the 45 metres to the top of the former watchtower.

The views are stunning but I can tell that the tower’s original use, to keep an eye on the 350 slaves who worked here, is not lost on my boys.

Back in Trinidad, we put away the town map and take a wander.

Kids play football in the street, neighbours sit on stoops and gossip, and cockerels run amok.

READ  Post-lockdown camping: 'It's a taste of freedom'

Quirky restaurant La Redaccion, housed in what were once offices of the former Spanish newspaper El Liberal, is worth booking for dinner — if only to visit the loos, which are in a beautifully preserved colonial bathroom with cast-iron tub.

But the food is good too, especially the roast pork belly.

Live music rings out at seemingly every turn in Trinidad — on street corners, in bars.

We pop into one place barely big enough to swing a cat, which has somehow squeezed in a band that is playing Son Cubana — a blend of African and Spanish beats.

Their cover of Chan Chan, a hit for Nineties Cuban ensemble band Buena Vista Social Club, gets the whole bar on their feet, singing along.

I do like a great beach when on holiday, though. So, culturally enriched, we travel 260km by private minibus to Cuba’s premier resort, Varadero, where the soft, white sand bordering the Atlantic Ocean is justly rated one of the world’s best five beaches.

The spacious suites of the Iberostar Varadero hotel are painted in sunshine- yellows and sky-blues, to put you in beach mode.

A few days spent here is all about kicking back, and I do not worry about my sons venturing out to sea on the complimentary paddleboards, kayaks and pedalos because the water is shallow for quite a distance.

Shoals of mackerel shimmy by, while overhead, brown pelicans circle as I swim in water the temperature of a warm bath.

Lunch is BBQ-style, served beachside or poolside, then for dinner there is a choice — from Japanese, through all-encompassing international options, to a Cuban restaurant, Ambrosio, for classics such as ropa vieja, a rich braised-beef casserole.

READ  Expert predicts what holidays will look like in 2070

Tempting though it may be to never venture out of the resort, Varahicacos Ecological Reserve, with 31 species of birds and 24 of reptiles, is on the doorstep.

COVID INFO: Holidays are not currently permitted in lockdown. You need a negative PCR test taken within 72 hours of travel and will be given a second PCR test on arrival in Cuba.

Tourists staying in casa particulares (local rental homes) should not leave their casa until they receive a negative PCR test. You will need to take another PCR test before return to the UK and self isolate for ten days (five if a second negative test is taken).

GETTING THERE: Virgin Atlantic flies from Heathrow to Havana. Return fares from £479. See virginatlantic.com.

STAYING THERE: Rooms at Casa Barmarin, Trinidad, start at £71.50 per night, including breakfast. See casabarmarin.com. Double rooms at Iberostar Selection Varadero start at £267 per night, based on two sharing on an all-inclusive basis. See iberostar.com.

OUT & ABOUT: For reliable and safe private transfers, see taxivinalescuba.com.

No flights from UK to Australia until next winter, warns Qantas CEO

Nashville – come to the home of country music, fun, fine food and whiskey

We set out with binoculars to search for the tocororo, Cuba’s national bird, with its green back, blue head and bright-red belly.

To snorkel with angelfish and lionfish, we take a boat tour to the nearby isles of Romero, Blanco and Piedras and local coral reefs.

Sailing back, we then watch the sun setting — the perfect end to the most colourful of holidays.