David Schwimmer has poured cold water on the idea of a Friends revival – saying the show has already ended in “the ­perfect way”.

The 53-year-old actor – who played Ross on the hit show – said it would be better for people just to imagine what the characters are doing now rather than catching up with them 16 years later.

The news will disappoint millions of fans of the US comedy.

In recent months speculation has reached fever pitch that Friends could be rebooted in some fashion, possibly as a new series or a movie.

Last year, Jennifer Aniston, who played Rachel, put the rumour mill in overdrive – and briefly crashed Instagram – when she posted a selfie of the entire cast together again.

The picture of the happy looking Jennifer, David, Matt LeBlanc, Matt Perry, Lisa Kudrow and ­Courteney Cox prompted predictions that a new project was on the cards.

But David said: “Everyone always asks if there will be a reunion, but Friends ended in the perfect way.

“I think everyone’s imagination of what Ross and the rest are doing is better.” 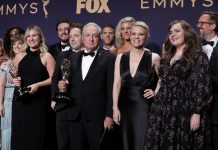