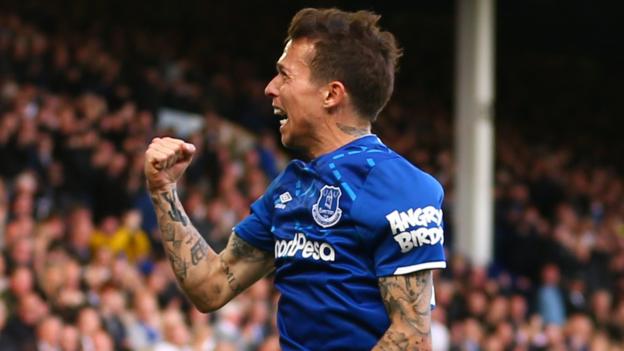 Everton manager Marco Silva insisted “pressure is a privilege” after a 2-0 win over West Ham United dampened speculation about his Goodison Park future.

The 42-year-old Portuguese was under fierce scrutiny after four successive Premier League losses put Everton into the relegation places.

Silva made five changes from the side that lost at Burnley and was rewarded as recalled Brazilian Bernard set Everton on their way with a brilliant individual first-half goal and record signing Gylfi Sigurdsson, who was dropped from the starting line-up, wrapped up the win with a spectacular strike in injury time.

It means, temporarily at least, the heat is off Silva.

“Pressure has to be a pleasure, a privilege for us,” he said. “We are doing what we love. Express yourselves on the pitch is what I say – and we did.

“When you are not in a very good moment, the pressure is there to win more games. We were not good enough in last results.”

Everton’s supporters gave their team vociferous backing throughout and Silva said: “The crowd was really good. I asked them to support our players from the first moment and they did.”

“I wasn’t nervous. This afternoon we created so many chances. The game was always under control.”

West Ham manager Manuel Pellegrini was bitterly disappointed and, after replacing Felipe Anderson with Andriy Yarmolenko at half-time, admitted: “In that moment, if I could make 11 changes, maybe I do.

“In the first half we didn’t shoot once at goal. Everton dominated the game. They had six or seven chances.”

Brave Silva gets his reward

Silva took positive action with his back against the wall – so deserves full credit as Everton produced their best performance of the season to overpower woeful West Ham.

He dropped Sigurdsson, who can have no complaints after his poor form this season, pushed Richarlison into the centre and brought back Theo Walcott.

Silva reintroduced Tom Davies into central midfield alongside Andre Gomes and gave Alex Iwobi the number 10 role in behind the striker.

The result was an Everton performance full of energy, hard work and creativity that should have reaped a much greater victory margin than it actually did.

It was only the excellence of West Ham goalkeeper Roberto, producing a succession of fine saves and also calling on the help of the woodwork, that kept the score within reason for the Hammers.

Everton were always on the front foot, backed by a raucous Goodison Park crowd that never wavered in its support for Silva’s team.

It will take more than one win to blow away the clouds over Silva as he has reached that critical stage where one setback ratchets up the pressure again.

All the noises suggest he still needs to follow this up with a win at Brighton next Saturday and then at home to Watford in the Carabao Cup.

This, however, was exactly what he needed – namely a comprehensive, crowd-pleasing win in which Everton responded to the manager’s changes and promptings.

West Ham should have their sights set on the top six in this season of Premier League flux, with Spurs struggling and Chelsea, Manchester United and Arsenal in stages of relative transition.

Instead, they have an infuriating inconsistency that threatens to derail those aspirations once more.

Yes, they can throw in the occasional excellent victory as they did against Manchester United – although that currency is devalued these days – but then they are humiliated in the Carabao Cup at League One Oxford United, lose at home to Crystal Palace then deliver this shocking show at Goodison Park.

If they had come near snatching a point here, it would have been an act of grand larceny.

Pellegrini stood motionless in his technical area, actions mirrored by most of his team as they lacked energy, ideas and threat.

Only keeper Roberto emerged with any sort of credit in what was a display lacking heart and competitive edge.

If those top-six hopes are to be realised, they cannot perform like this on many more occasions.

Home comforts for Toffees – the stats

Everton travel to Brighton in their next Premier League game on Saturday, 26 October (kick-off 15:00 BST), while West Ham host Sheffield united at the London Stadium at the same time.