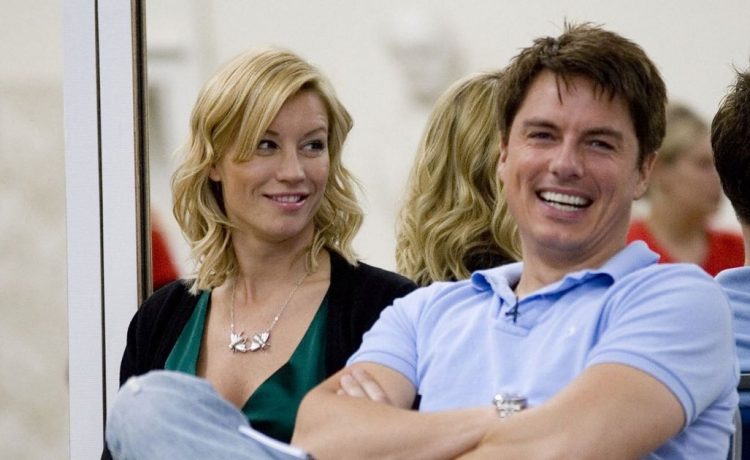 Denise Van Outen has been reunited with old friend John Barrowman on Dancing on Ice.

The new series of the ITV ice skating show returned to screens tonight.

The famous duo have worked together before, with Andrew Lloyd Webber on the BBC.

They were part of a panel of experts charged with the task of finding West End stars of the future for the legendary theatre producer’s TV talent search competitions.

But their time as colleagues didn’t end well, when they were both given the boot by the musical king, as reports the Mirror.

Denise became friends with Lloyd Webber when he chose the Essex entertainer to be the star of his one-woman show, Tell Me On A Sunday, in 2003.

Having proved a successful partnership, he then wanted Denise to participate in his first show, How Do You Solve a Problem Like Maria, when it launched in 2006.

But Denise turned down the opportunity to join the search for the lead role in The Sound of Music, confessing she “felt uncomfortable about being on the panel and giving my criticism”.

Lloyd Webber was joined on the panel by Doctor Who star, Scots entertainer John.

After a successful series, there was the follow up a year later called Any Dream Will Do, which featured both John and Denise this time round.

Then in 2008 they took part in I’d Do Anything to cast a Nancy and three young performers for a revival of the musical Oliver!.

It was during filming of Any Dream Will Do, the hunt for a new lead in Joseph And The Amazing Technicolour Dreamcoat, that Denise met future husband in the shape of contestant Lee Mead.

Denise and the show’s eventual winner Lee married in April 2009 before going on to have daughter Betsy.

But former Big Breakfast host Denise’ friendship with Lloyd Webber was about to hit the rocks after a very public row.

She was expected to join the West End mogul for his next talent show, Over The Rainbow, to find a Dorothy for a new The Wizard Of Oz production.

Just three days before filming for the new BBC series started, Denise discovered from a humiliating source that she would not be part of the show.

“I was sent all the filming days and three days before I was set to start I found out through a journalist that I was no longer part of the show,” she told the Daily Mail in December 2012.

“A press release had already gone out. It said because it was a new show, there was to be a new line-up.

“I was obviously upset. Andrew was involved, he was part of the decision.”

Denise was adamant that Andrew had been behind the decision not to bring her back.

The disappointed TV judge felt “disappointed and let down” by someone who was supposed to be her friend.

“I was upset because at that time Dannii Minogue, who was a judge on The X Factor, was pregnant as well and they just got stand-in judges.

“That was what I suggested. I would have missed at most only one show. I felt a little bit cheated because I loved the shows.

“I’d met my husband through one of the shows and here we were having a child together. It felt unfair. I was upset at the time, but I am not bothered by it at all now.”

Denise and John, who had been part of the search for Nancy four years before, made way for a new line-up with Welsh singer Charlotte Church, EastEnders actor John Partridge and actress Sheila Hancock.

The hunt for Dorothy was due to end in May, when Denise would have been eight months pregnant, but she insisted it was not an issue and she felt “fit and healthy”.

A spokesman on behalf of Lloyd Webber said: “The BBC had complete and strict editorial control of Over The Rainbow. The decision to replace Denise Van Outen was theirs because they wanted to refresh the judging panel.”

Andrew insisted that there was no rift between him and Denise.

“Of course I still have a friendship with Denise,” he said in January 2012.

“We’ve got a real depth with the panel this time. Charlotte will bring the spirit. She has been through it all.”

However, he went on to make some controversial comments that would reignite the row over Denise’s axing.

He said working around her pregnancy “wouldn’t be fair” on the contestants vying to play Dorothy in stage production of The Wizard of Oz.

His remarks fanned accusations of sexual discrimination by Webber over his treatment of pregnant Denise.

Lloyd Webber said: “The truth is that she is having a baby. I’m a great friend of Denise, I wish her the absolute best, but we have to think of our girls in the show.

“It wouldn’t be fair on the girls if we had to draft in somebody for three shows who hadn’t been working with them.”

And in a final twist, he told a Sunday Mirror journalist: “I’m sure as a woman you understand that.”

A BBC spokeswoman said that none of the judges on any of Lloyd Webber’s previous BBC talent shows were returning in the new series.

The spokeswoman added that Denise’s absence was nothing to do with the fact that she was pregnant.

“Over the Rainbow is a brand new show for BBC1 with a completely new lineup of judges,” the BBC said in a statement.

“As a result neither Denise Van Outen nor John Barrowman nor any of the other five previous judges will be taking part on the panel.”

Denise welcomed baby daughter Betsy into the world in May 2010.

She also made up with Lloyd Webber and insisted that they became friends once again.

“We still speak and he has invited me round to his house,” she told the Daily Mail in 2012.

Tonight, she took to the ice for her first round of Dancing on Ice with partner Matt Evers.

Glaswegian John sits on the panel of judges and has said he is “expecting a lot” from his friend, but it won’t put the pressure on Denise.