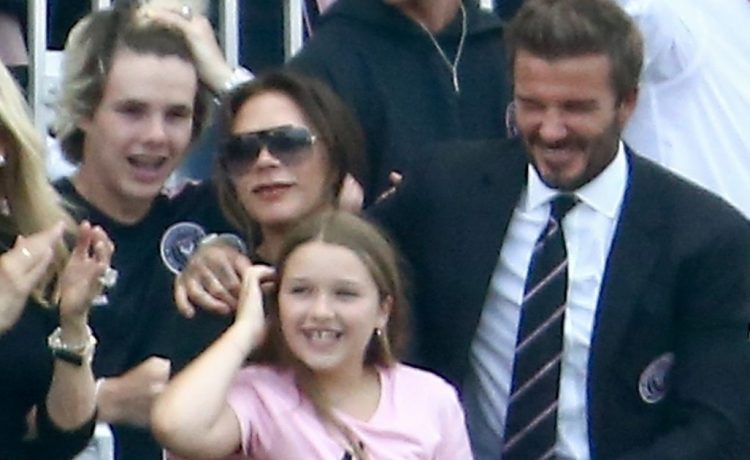 David Beckham shared a sweet cuddle with his daughter Harper as the former footballer and his family attended the Inter Miami home opener against LA Galaxy in Florida over the weekend.

The doting dad and owner of Inter Miami, 45, was pictured front row of the game with his youngest child, nine, on Sunday and the duo looked ecstatic as they celebrated his football team scoring goals – before losing out 3-2 to rival club LA Galaxy, which David used to play for.

Harper was full of smiles as her mum Victoria and dad showered her with affection at the match.

In another photo, David planted a kiss on his daughter’s head as she enjoyed some quality time with her famous parents, as well as brothers Cruz, 16, and Brooklyn, 22, with his fiancée Nicola Peltz and her billionaire family also in attendance.

The Beckhams appeared in great spirits as they watched Sunday’s first match of the MSL season – which tied in with Victoria’s 47th birthday celebrations.

The sportsman looked hunky in a suave suit and sunglasses, while his wife opted for a plain T-shirt and jeans, with her signature oversized sunnies.

Victoria also cuddled Harper while they watched the game together.

The fashion designer celebrated her big birthday over the weekend, with many celebrities invited to her birthday beach soirée on Saturday.

READ  'She scratched me so hard, I was bleeding': Kim Kardashian reflects on 'intense' brawl with Kourtney

It was a busy day for Posh, playing hostess to a star-studded guest list at the launch of hubby David’s football team.

Among the guests were the likes of Kim Kardashian and Pharrell Williams.

But after the footballing festivities were done, Victoria, David, their kids and a few close friends headed to the city’s legendary sandy beaches for a laid back evening with nothing but a firepit, disco ball and a few drinks.

Cutting an angelic figure in a plunging white gown, she gave us the occasional glimpse into the low-key birthday celebrations.

“It’s my birthday and I’ll bring my party rocker if I want to,” she captioned a snap of a disco ball.

Meanwhile, hubby David and the kids posed for photos with their mum beside a firepit.

“Happy Birthday mama,” he wrote in tribute, “we love you so much and you deserve the best day ever…To the best mummy and wife happy 47th birthday @victoriabeckham ( I’m still 45 btw ) we Love u x.”