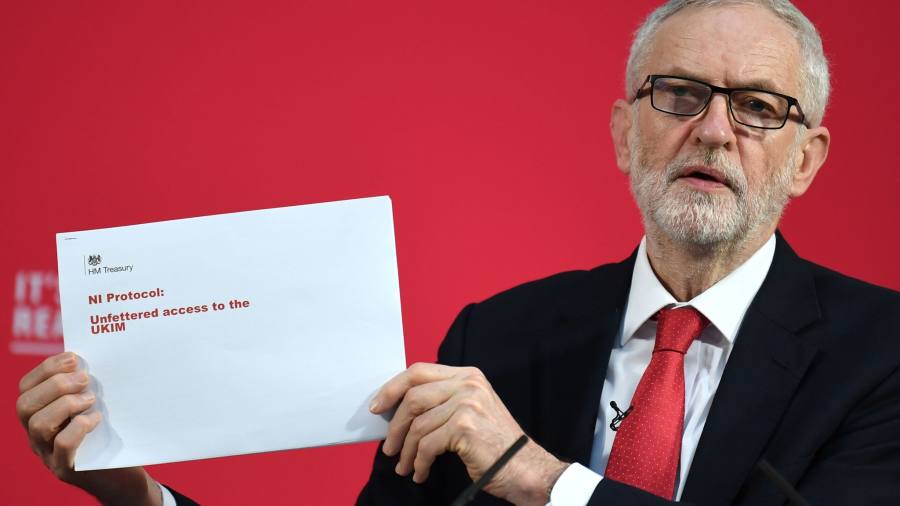 Labour leader Jeremy Corbyn has unveiled a leaked government document on the negative economic impact of Boris Johnson’s Brexit deal on Northern Ireland, saying it is “cold hard evidence” that the prime minister has been misleading people.

With less than a week to the general election, the revelation is likely to be of far greater interest to voters in Northern Ireland than those in Great Britain.

However, Mr Corbyn is likely to use the document in Friday evening’s one-on-one BBC debate with Mr Johnson to suggest that the prime minister is misleading people about his deal. The clash is one of the last major set piece events before the public go to the polls next Thursday.

The 15-page confidential document appears to be an analysis drawn up by the Treasury of the consequences for small traders of the Northern Ireland protocol agreed between the UK and EU as part of Mr Johnson’s withdrawal agreement.

Entitled NI Protocol: Unfettered Access to the UK Internal Market, it states that there will definitely be customs checks on trade between Northern Ireland and Great Britain despite Mr Johnson’s previous claim to the contrary.

On November 15 the prime minister was asked if he could pledge that Northern Irish businesses would not encounter additional paperwork or fees when trading with Great Britain.

“I absolutely can,” he insisted. “This is a matter for the UK government and we will make sure that businesses face no extra costs and no checks for stuff being exported from NI to GB.”

But the document released by Mr Corbyn contradicts Mr Johnson’s words, saying categorically: “Customs declarations and documentary and physical checks on W/E and E/W trade will be highly disruptive to the NI economy.”

The checks would be particularly disruptive for small traders, the paper says. They could include rules of origin declarations, safety and security checks, regulatory checks and “SPS checks” — meaning food safety and veterinary checks.

It points out that 98 per cent of Northern Ireland exporters to Great Britain are small and medium enterprises “who are likely to struggle to bear this cost”.

It also shows that for Northern Ireland importers, the cumulative effect of customs checks is equivalent to a 30 per cent tariff.

The document states that high street prices are likely to rise in Northern Ireland as a result of the Johnson deal and that unemployment in areas like retail is likely to rise.

“What we have here is a confidential report by Johnson’s own government, marked official, sensitive, that exposes the falsehoods that Boris Johnson has been putting forward,” Mr Corbyn told reporters at a central London press conference.

“This is cold, hard evidence that categorically shows the impact a damaging Brexit deal would have on large parts of our country.”

Mr Corbyn said Mr Johnson had repeatedly claimed there would be no border in the Irish Sea but that the leaked document showed this was “simply not true”.

“And for trade going the other way from Great Britain to Northern Ireland there will be all of the above plus, potentially, damaging tariffs. This drives a coach and horses through Boris Johnson’s claim that there will be no border in the Irish Sea.”

A-levels and GCSEs: Free exam appeals for schools in England