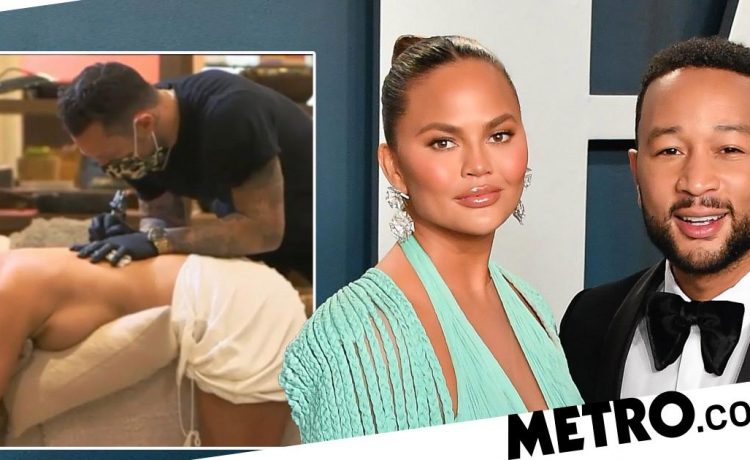 Chrissy Teigen has got another permanent tribute to husband John Legend, after getting the lyrics to one of his songs tattooed on her back.

The 35-year-old previously got John’s name, as well as their children Luna and Miles’ names, tattooed on her arm, but it seems that wasn’t enough for Chrissy.

Tattoo artist Daniel Winterstone inked the lyrics ‘Ooh Laa’, the name of one of John’s latest songs from his album Bigger Love, down Chrissy’s spine in delicate cursive writing, and Chrissy shared the process on Instagram.

The Lip Sync Battle star was seen topless while getting the lyrics traced on her back, before the tattooing session began.

John, 42, joked that the lyrics had a raunchy past, as he asked Chrissy if she remembered the first time she had heard Ooh Laa.

Her husband the shared that they had been in the bedroom, and said they ‘had to test run it. Make sure it worked. It worked. We actually played it on repeat the first time. It was a good conversation starter.’

Daniel Winterstone also posted the finished tattoo in black and white, and wrote: ‘What a blessing to honor Chrissy with this ooh laa tattoo down her spine!

‘John wrote this sexy song for her so naturally she should have it tattooed on her right?!!! And if you haven’t heard BIGGER LOVE John’s new album: listen it’s so good!’

Fans were loving the inking, as well as the relationship between Chrissy and John.

The couple, who have been together for nearly 15 years, are regularly held up as relationship goals thanks to their PDAs on social media.

Recently, EGOT winner John left a rather frisky comment on a picture of his wife in her underwear, so we’re pretty sure the fire is still alive in this marriage.

Chrissy and John met 2006 when the model starred in the singer’s video for his song Stereo.

Five years later, they got engaged, and in 2013, the couple tied the knot in Italy.

Since then, they welcomed their two children Luna, four, and Miles, two, via IVF treatment.

Sadly, Chrissy and John lost their son Jack last year due to complications in the pregnancy.

In honour of her son, Chrissy got a tattoo bearing Jack’s name on her wrist last year.

READ  The Mandalorian debuts action-packed first trailer for season two of the Star Wars series
Share on FacebookShare on TwitterShare on PinterestShare on Reddit
newsgrooveJanuary 13, 2021