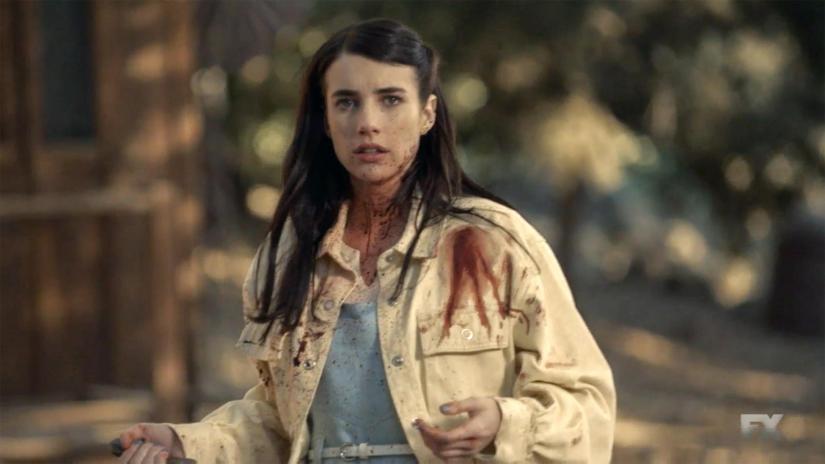 The real-world arrest of Richard Ramirez is one of my favorite true crime incidents ever, and considering it’s a favourite, the cold opening of Richard Ramirez getting chased down and beaten by a mob after being betrayed by Mr. Jingles—sick of the constant Billy Idol and living like a murder hobo—is one of my favourite cold openings American Horror Story has ever done. The true story is insane, and rather than embellishing it, the show plays it straight and the end result is funnier than most jokes could have been in that situation. But this is American Horror Story. If being dead doesn’t stop a killer from killing, then why would something as boring as being in jail stop someone from murdering others?

That’s part of the fun of American Horror Story. Considering Richard Ramirez has the power to bring people back from the dead and into Satan’s service, astrally projecting himself out of his jail cell to kill guards and bring an executed prisoner back to life shouldn’t be that much of a surprise, right? He serves his purpose in the great Satanic plan, after all, and if the devil isn’t done with Brooke, a little thing like death by lethal injection won’t keep her down for long.

Margaret might be rich enough to appear with Robin Leach, but if she isn’t done with Camp Redwood, then the camp isn’t done with Montana, Xavier, Ray, and the rest of the group. Brooke’s execution and rebirth won’t save her. Running off to Alaska and fathering a child won’t save Jingles. So long as Richard Ramirez is out there praying to Satan and causing chaos, nobody’s done with anybody. The spirits begrudge Margaret her continued life, Ramirez has a higher mission, and Jingles abandons his infant son to keep him safe from his father’s past.

READ  Christina Aguilera reflects on 2016 'Voice' departure: I was 'ready to move on'

A lot had changed in four years, except for the dead haunting Camp Redwood. Margaret got married (to Trevor of all people) after a failed blackmailing attempt by her husband, and turned her tragic story and her husband’s inheritance into a real-estate empire, taking distressed properties with horrifying pasts, buying them up, and making them into tourist attractions. Lizzie Borden’s house becomes a bed and breakfast with a scare experience, and she’s also bought up John Wayne Gacy’s ranch-style home in the suburbs and Briarcliff Manor (which you might remember from Asylum). Murder is good business for Margaret, and she’s not going to let a little thing like two dead hikers killed at Camp Redwood slow down business. In fact, true to her nature, she leans in, using the publicity from the killings (done by Montana and Xavier) to sell a rock concert featuring none other than Ramirez favorite Billy Idol as a headliner.

That hook is enough to bring the whole gang back together. Jingles is drawn back in thanks to the death of his wife, Margaret and Trevor by the lure of the almighty dollar, Ramirez by the presence of Billy Idol, and everyone else is just… hanging out where they died. It’s fun stuff from Ryan Murphy and Brad Falchuk.

Ben/Donald has turned completely away from violence after his year of hanging out as the Night Stalker’s sidekick—the brief scene of him simply pulling a paper out of a machine and silently handing it over to a woman before pointing out the man at the store counter was sold completely by Richter taking out the Black Sabbath and replacing it with REO Speedwagon’s smooth ballad sound. Little touches throughout (Ben as Donald refuses to rent horror movies at the video store where he works, Brooke and Richard Ramirez’s conversations through the prison cell door or via astral projection, the funny moment when Trevor watches himself on Lifestyles of the Rich and Famous) are enjoyable, and Murphy and Falchuk’s script does a good job of moving time forward through both efficient chyron usage and changes to how the characters look and dress.

READ  "It gave me a reason to really fight": 'Queer Eye's' Jonathan Van Ness on living with HIV

Those unable to get away from their past seem haunted by it. Trevor and Margaret are rich and miserable. Ben’s past as Jingles causes the death of his wife and forces him to abandon his child. Brooke is executed for crimes she didn’t commit, only to be saved by a figure from the past who was also believed to be dead. Richard Ramirez laments he’ll never be considered a great artist but just as an 80s relic. Only the people who are trapped in the past, by choice or by force, are even close to happy. Montana and Xavier seem to enjoy their killing spree even if the others around them seem to be getting sick of their antics, which leads into the reunion concert.

Margaret and Trevor hate each other, stuck in a marriage neither can escape without risk, and the confrontation Leslie Grossman and Matthew Morrison play out early in the episode feels like one they’ve had many times before, sort of a Virgina Woolf situation if Elizabeth Taylor’s Martha had murdered several people. Leslie Jordan, as always, steals the scenes he shows up in based on costuming alone. Ben finding his wife dead and being forced to abandon his son to spare his life lands with more weight than it has any right to, considering Ben’s past as Mr. Jingles and the general flippant tone of the rest of the episode. John Carroll Lynch continues is criminally underrated actor, putting in good work in a role that won’t be appreciated outside of horror circles.

It takes a few twists to get everyone involved in 1984 back to the place where it all started, but it works. Rich people throwing music festivals was a big deal in the late 1980s, and it’s a smart way to get the gang back together despite most of them being dead. Nothing gets people talking like a sequel, and Camp Redwood is ripe for the picking.

Here are Ron’s recommendations for the best TV horror shows currently on air.