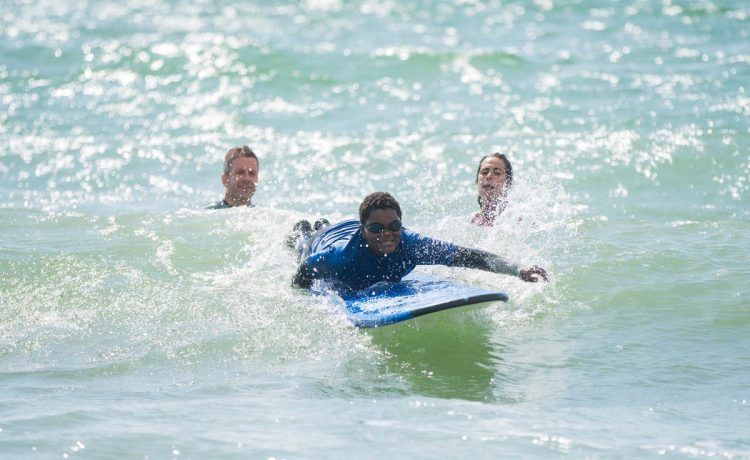 Young people are driven to beaches in East Wittering and Brighton and given surf lessons in the sea in a bid to improve their wellbeing and confidence.

The City to Sea Wave Project, which works with young people in Southwark, has seen a spike in demand during the pandemic. For many youngsters it is the first time they have seen the sea.

Joe Taylor, founder and chief executive of the project, said it brings fun into the lives of children who have been stuck in flats during months of lockdown.

He said they work with children who are bereaved, lonely, living in poverty or who have been bullied, as well as those who have been through a trauma or are at risk of developing a mental health problem. Children can be referred to the service by schools, councils, social care or other charities.

A study of the project published in the Community Practitioner journal found it resulted in a “significant and sustained increase in wellbeing”.

Mr Taylor said: “Some young people in London have never experienced the sea and the way the horizon just disappears to nothing. Sometimes their conversations die on the spot and they are left speechless when they suddenly see the sea.

“When they get into the waves, that’s the point you really start to see the stress just disappearing away from them and the smiles on their faces. You can just see all their worries evaporating before your eyes.”

During the six-week course, which is part funded by Olympic legacy funder Spirit of 2012, children are picked up from London in a minibus at 9am and driven to the beach for surfing lessons. They are given a mentor and work at their own pace. At the end of the course they become members of a surf club which meets in London for activities such as swimming and paddle boarding. The first few weeks of the course are spent at water sports centres in the capital getting used to water.

Mr Taylor said it does not matter how good the children become at surfing — just showing up and overcoming challenges such as putting on a wetsuit all give them a boost.

He said cold sea water can also help reduce anxiety and depression, and the culture of support is key: “It is about them overcoming each barrier along the way and feeling like they have achieved something at each point. That’s where the therapy comes from.” He praised the Standard’s Young London SOS campaign which is highlighting the mental health crisis among young people, and supporting Place2Be, which provides counsellors to schools, which he said was “really important”.

Casey, 12, was referred to the Wave Project with problems including anxiety and took part in a course in September. He is a carer for his mother Cassie who has a brain tumour and has frequent seizures. A project spokeswoman said Casey made “incredible progress”, partially due to the smaller “bubble” sessions set up due to the pandemic: “He opened up completely and enjoyed the social interaction with both surf mentors and children. He especially benefited from having a positive male surf mentor.

“The group enjoyed his sense of humour and he gained a lot of confidence realising that the other young people wanted to interact with him and liked his jokes and creativity.”