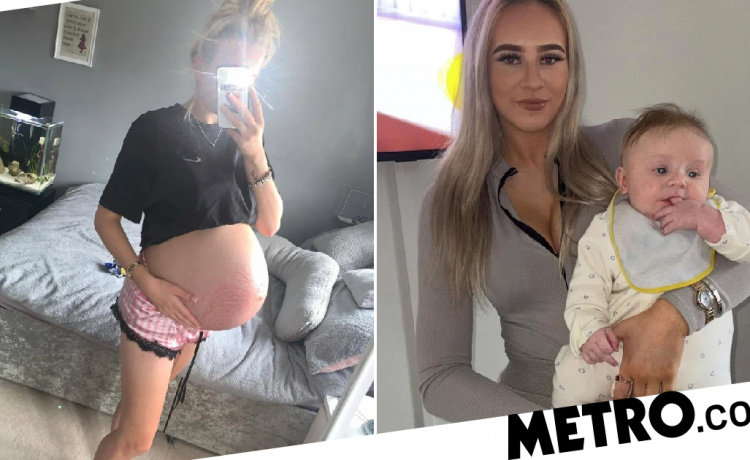 A mum whose baby bump was so big people thought she was having twins, has given birth to a baby as big as a bowling ball.

Size-six Tia Walters, 19, from Littlehampton, West Sussex,, was so large during pregnancy she struggled to get up off the sofa.

She found out why when she gave birth to Roman Tomlinson, on 23rd October last year, who tipped the scales at 10lbs 8oz.

Tia’s bump had grown so big people kept asking her if she was having twins.

During the birth at St Richard’s Hospital, Chichester, Tia had a C-section, which she says is because Roman was too big to push out.

Tia, a beauty and accessories business owner, says: ‘It was so hard to walk around and do anything without being in pain. I had no idea it was because my little boy was so big.

‘When I saw him I couldn’t believe how big he was. He was so long. I am quite small, so I’m amazed I managed to cope through pregnancy.

‘He may be a big baby but I wouldn’t swap him for the world.’

Tia found out she was expecting in February 2020, and started to wonder why she was so big when her stomach started to grow to a colossal size.

‘I couldn’t walk without being in pain,’ she adds. ‘I just didn’t know why I was so big.

‘People kept asking me: “Are you sure it is not twins?”‘

After Tia’s waters broke, she rushed to St Richards Hospital, Chichester, and tried for half an hour to push her little one out.

But after not being able to get Roman out and because of additional complications, she was rushed for a c-section.

Luckily Tia was fine and her baby boy, who she named Roman, was delivered safely on October 23rd.

‘When I came round and I got to see Roman I was shocked at his weight,’ she says.

‘I just couldn’t believe I had had such a big baby when I am quite small.’

The average weight of a newborn boy in the UK is 7lbs 80z and for a girl is 7lbs 4oz.

Roman was born weighing 10lbs 8oz, which is the average weight of a three month old baby.

Tia has had her partner, Alfie Tomlinson, 26, to help her with her big new baby.

‘He is almost the same size as his large elephant cuddly toy. But he’s such a happy baby.

‘I think he is going to be tall because of how long he was. It may have been a traumatic birth but it was all worth it for him.’


MORE : Disabled man hits back at people who think his girlfriend is his carer


MORE : How to start an allotment

READ  Kristen Bell says five-year-old daughter no longer uses diapers after she was shamed
Share on FacebookShare on TwitterShare on PinterestShare on Reddit
newsgrooveMarch 5, 2021