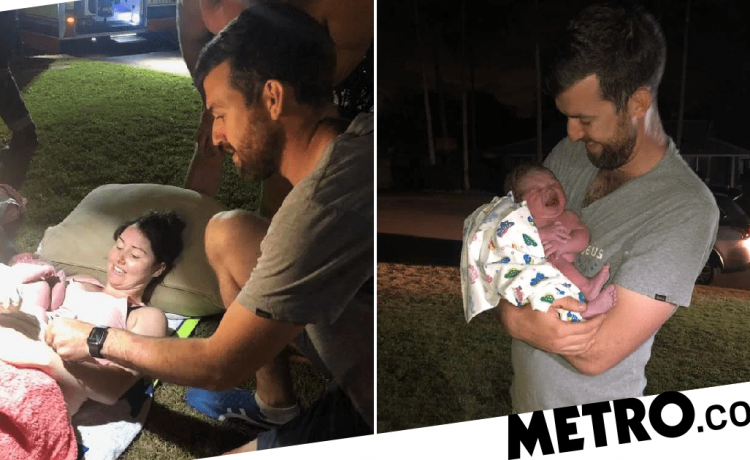 When Lisa Leavey felt a few niggling pains, she initially didn’t think it was anything to worry about.

Already a mum to one, she was pregnant with her second little boy and thought she’d know when labour started.

But things really ramped up quickly, and Lisa ended up giving birth in her front garden as she realised the baby was coming while walking to the car to go to the hospital.

Her husband Emmett, 31, ended up delivering their second son Michael as she lay on the lawn.

The 33-year-old explains: ‘I noticed I was having a few niggles and put it down to Braxton hicks.

‘I kept myself busy throughout the day, and husband was building a playset for my son for Christmas and I mentioned to him that I was having a few symptoms and we decided at around 6.30pm to leave my son Sean at a friend’s place.

‘I knew labour can take a while, so I just pottered around the house and at 9pm we rang the hospital, letting them know we were on our way. We live a few minutes away from the hospital, so my husband and I thought we had loads of time to get there.’

But when she walked outside to the car, she realised Michael was in a huge rush to meet them.

She adds: ‘There was no way I was getting into the car. Emmett tried to get me back into the house, but baby Michael was born within minutes and arrived right there on our front lawn. Emmett helped deliver him, catching him as he came out.’

The couple, who are originally from Fermanagh, Northern Ireland, but now live in Brisbane, Australia, had a straight forward pregnancy, other than having to go through it during the pandemic.

Lisa says: ‘Being pregnant during a pandemic was hard, as restrictions were put into place with hospital visits and appointments. I was also considered an essential worker being a social worker, continuing my work with vulnerable families throughout my pregnancy.’

As she was 10 days overdue with their first son Sean, she was expecting Michael might come late too, but he arrived on his due date, December 9.

She laughs: ‘I was quite relaxed thinking I had plenty of time to be prepared for baby number two.

‘I had an induction with my first son due to him being 10 days overdue and my labour lasted 5 hours, which is considered quite quick for a first-time mother. With the second pregnancy, I did not know what to expect as I wanted to go for a more natural birth.’

But Michael was right on time and eager to meet them, arriving on the lawn before the ambulance even had time to arrive.

Lisa adds: ‘20 minutes later the paramedics arrived, surprised the baby had been delivered already. Once they checked Michael was okay, Emmett was able to cut his cord.’

Baby Michael is doing well and they are settling in as a family of four, but family and friends back home in Northern Ireland have enjoyed hearing the story of his dramatic birth.

Lisa says: ‘Our family are delighted baby Michael is healthy and everything went okay. So far, Michael is a happy content little baby. We have loved having him and feel so blessed having him after the crazy year 2020 has been.

‘We have had plenty of facetime calls and are enjoying having plenty of family time during the Christmas holidays.’


MORE : Student went to toilet to do large number two but came out with a baby

READ  Mum makes chore list to trick her kids into doing jobs and says her house is the cleanest it’s ever been
Share on FacebookShare on TwitterShare on PinterestShare on Reddit
newsgrooveDecember 26, 2020