Most of us would be reluctant to admit that we reuse gym clothes – but let’s be honest, it’s probably happened at least once or twice, right?

Given people wear jumpers and jeans without washing these between use, it’s understandable that you might think there’s no harm in throwing on the damp sports bra from the morning run again when you take on that late-night weight-lifting session, but it’s actually a pretty bad idea.

We sweat a lot more in gym gear than in daily outfits worn to work (unless you work at a gym, that is) and by not washing our kit on a regular basis, the sweat, bacteria and the body’s own oils will seep into the fabric (especially in synthetic materials).

Reusing the outfit causes build-up, which in turn can make the items stink.

But foul-smelling clothing isn’t the only concern of not washing gym wear after every use. It can also wreak havoc on your skin – here’s why.

First, let’s review what happens in the body when we are active.

As you’re working out, your body temperature will rise, which in turn causes your sweat glands to release sweat onto your skin.

The healthy bacteria that lives on our skin will then soak up the sweat, and this becomes the perfect breeding ground for them to multiply.

This means that if the clothing is reused again without being washed first, especially after a rigorous workout,it could cause skin problems or worsen existing conditions, according to Dr Aishah Iqbal.

‘Our skin carries normal flora which is the natural harmless bacteria we carry on our skin and other areas of the body.

Clothing becomes damp and moist when we sweat, which is a a perfect environment for bacteria to flourish – during this process some can produce an odour, which is why we typically think of sweat as smelly.

‘If clothing is then reused without being washed, skin is being introduced to clothing that may be inhabiting bacteria. The result of this is typically worsening of skin issues like acne – caused by clothing being tight and not allowing the skin to breathe, as well as introducing bacteria to the skin.

‘Yeast infections are also common when areas like the groin and armpit are repeatedly exposed to damp environments.’

Is it realistic to expect people to wash their gym gear after every use or have enough clothes to swap for others in the meantime? Perhaps not.

There are conflicting views on whether people need to wash workout clothes after each use, especially if the workout was minor – such as going for a brisk walk or a light session in the gym that was concentrated on one muscle group.

But if you’re considering skipping one wash (don’t go over two, if you can avoid it) and as a general rule of thumb if you must reuse the clothes, wait for them to dry out.

Bear in mind that you are also picking up bacteria from other people in the gym by sharing machines, mats and changing rooms.

One study, published in the International Journal of Environmental Research and Public Health analysed four fitness centers across Memphis, US, and found 25 different types of bacteria on exercise equipment, handrails and toilet handles.

‘It is important to wash you clothes as there can be plethora of harmful organisms than can reside in the warm, damp and crowded conditions found in the gyms and without washing, you are transferring these organisms to your car, home and work,’ said Dr Asif Munaf, who runs a men’s health clinic and is the founder of Endorance, a wellness company.

‘Showering within an hour of finishing your session and washing your clothes after each session including your bag every few weeks is a safe and effective way to minimise the transfer of these bacterial infections.’

‘The best way to prevent skin infections is to ensure skin hydration, especially in the cold winter months when the cold dry air can really wreak havoc on your skin by causing it to become chapped and blistered,’ he added.

‘Regular use of non-irritant moisturiser twice daily is a surefire way of ensuring that your skin is appropriate hydrated to withstand the cold weather.’

A less serious but still annoying skin problem that can occur if you don’t change out of sweaty clothes or throw them on again when they are damp with sweat from a previous workout is breakouts – as the sweat can clog up pores.

You could also get rashes, athlete’s foot or a fungal skin infection, as well as ‘jock itch’ in the groin area, inner thighs or buttocks.

If your clothes are still moist, the skin may also start chafing when you use them. If you have an existing cut or graze – or develop one as a result of chafing and it isn’t bandaged up properly, the bacteria on your skin can also spread into the bloodstream.

Do your best to keep footwear fresh, too. While unlike clothes, you don’t have to wash these between each use (do still wash them though), but let them dry out and use another pair in the meantime.

Basically, keep your gym kit fresh and your skin will thank you.

READ  A cam girl makes a living by signing dirty talk for deaf people
Share on FacebookShare on TwitterShare on PinterestShare on Reddit
newsgrooveDecember 28, 2019 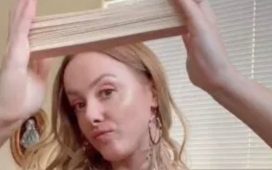