'Why feeling the cold from a drinks can blew my mind' 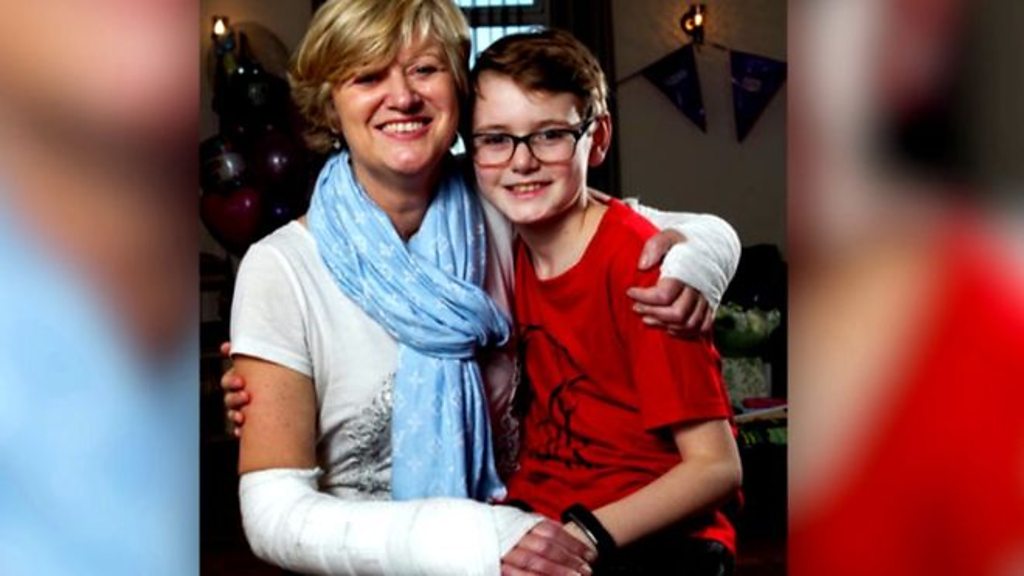 “Fluffing your son’s hair, really hugging him, holding his hand.”

For someone who has been through what she has in the space of a year, Corinne Hutton doesn’t need much to make her happy.

Last January she got the double hand transplant she had been waiting more than five years for, and feared would never happen.

This January, she will celebrate her “handiversary”, a year since a surgeon handed her back her independence.

Cor, from Lochwinnoch in Renfrewshire, finds the little things the most emotional now. And the mundane the most empowering.

Being able to do the simplest things for 11-year-old son Rory means the world to Finding Your Feet charity founder Cor.

“From an emotional point of view to be able to do things for him – make the packed lunches or the washing, or do the ironing is great,” she said.

“But on top of that, being able to hold his hand, fluff his hair, little things that might not be hugely exciting to him – but they matter a lot to me.

“People don’t appreciate what it means to have lost them,” she said.

Cor became the first Scot to undergo a double hand transplant when, in a 12-hour procedure, Prof Simon Kay attached two donor hands to her arms at Leeds General Infirmary.

The 48-year-old lost her hands and feet in 2013 after suffering acute pneumonia and sepsis, which almost killed her.

After more than a dozen false alarms over the years, a match for her own blood group, skin tone and hand size had been found.

Much celebration and wonder was made of the news that the transplant had finally happened, but the aftermath was far from easy.

Recovery was slow and blighted by infection.

Cor explained: “I’ll be on immune suppressants for the rest of my life. In the beginning it’s a huge dose and you have no immune system whatsoever. So I was catching every germ and bug going and was in and out of hospital for the first six months of the year.”

But by the time May arrived, Cor realised her “nearly-new” hands were doing better than her stumps. She had spent “far too many months” in hospital.

She said: “Not being able to drive and asking people to pick you up, drop you off, take you to hospital, go to the chemist. And the little things that carry on like you have to get your kid to the dentist, go to the post office – all these things need done and you are relying on other people doing it for you.

“But the second half of the year was constant progress. It has been a great gift for me – a hard year but a worthwhile one.”

She was driving with her stumps but has recently started to drive again using her new hands.

Cor faces another six months of physiotherapy. Her right hand has straightened out but she “needs to use her left hand more” to fully uncurl it.

One of the biggest milestones was getting some feeling back.

“I have started to feel hot and cold,” she said.

“It was a big moment. I suddenly felt the cold from a can of juice. It blew my mind.

“The first time I felt the cold can, just a pinprick of cold was all I felt and now it’s the whole hand.”

She now won’t burn herself because she can feel heat. And she is beginning to recognise sharp objects and is starting to identify objects by feeling.

Cor’s charity Finding Your Feet, supports other amputees and their families. She is hoping to be more involved with it in 2020.

After a year of concentrating on her own recovery and improvement, she wants to get back to helping other people.

She is planning to run a half marathon in March.

Cor finds that keeping herself busy is the secret to staying positive.

“I try not to think too much. Thinking gets me down and ultimately doesn’t give me my legs back,” she said.

“There is no point in dwelling on things. Helping others meant I wasn’t thinking about myself. That was massive and made me feel better about myself.

“I meet people in hospital who are about to go through amputation or have just been through it and I wanted to tell them the truth, and what I went through.”

She and Rory are looking forward to her handiversary.

She said: “We are quite excited about that but can’t help but think another family is coming up to a very different anniversary.

“I have huge sympathy for them and I never want to forget that I have been given this gift from a very generous family and what their sacrifice was.

Every day she thinks of the woman who died and her family’s generosity.

She added: “The family were very kind and said to me: ‘They are your hands now. Do the best you can with them’.

“Yes they are mine but I won’t forget her. Ever.”

READ  Getting sunburnt just ONCE as a kid can give you skin cancer as an adult, doctor claims
Share on FacebookShare on TwitterShare on PinterestShare on Reddit
newsgrooveDecember 30, 2019