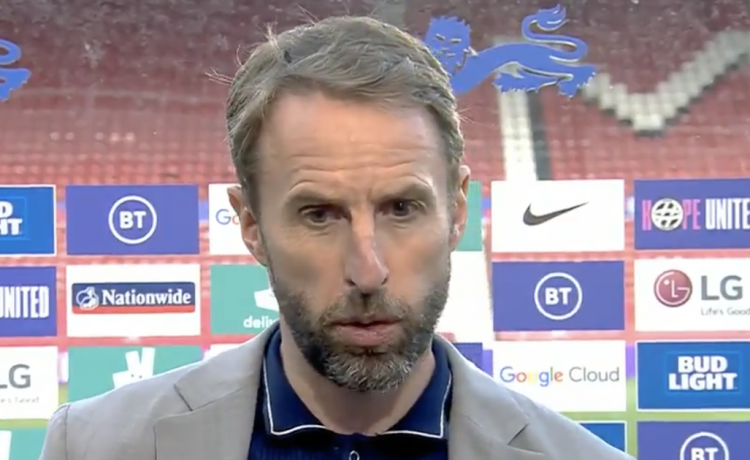 Gareth Southgate has suggested he will make the decision on who takes England’s penalties going forward after Jordan Henderson missed from the spot.

The Three Lions battled to a 1-0 win over Romania in Middlesbrough with Marcus Rashford scoring the winner from 12 yards.

The win could’ve been far more comfortable however as England were awarded a second penalty.

Dominic Calvert-Lewin picked up the ball and seemed poised to take the spot kick before Henderson ran over an appeared to call rank.

The Liverpool midfielder has never scored an international goal and came on as a second-half substitute following a lengthy injury lay-off.

Henderson though saw his effort saved by Florin Nita.

Southgate confessed he expected Calvert-Lewin to step up and claimed he would make the call next time.

He told ITV: “We had Marcus Rashford on penalties then James Ward-Prowse but both came off.

“We expected Dominic Calvert-Lewin to take it and I was expecting Hendo to go over to him and let him take it. We will pull rank next time.”

England were far from convincing on Teeside and will need to improve if they have serious Euro 2020 ambitions.

Croatia are the Three Lions’ first assignment in a weeks time and Southgate made it clear his players will need to increase their work rate having been less than impressed.

He said: “Yes, we had chances to make it more comfortable but so did they, the first half we did not work hard enough without the ball, we were too stretched and did not press well.

“After half-time, I thought we improved and it was helpful we went to 4-3-3 later and I have to say it was a good exercise, players needed the minutes and learned a lot from the game. Good to win.”

Jack Grealish played a starring role and it was his driving run that won the penalty which Rashford converted.

The Aston Villa man is not short of competition for a start in the forward area.

Phil Foden, Raheem Sterling and Jadon Sancho are options for Southgate and the Three Lions boss was giving nothing away.

He added: “We have a lot of competition in those areas of the field and he has had a important contribution to win the penalty. He is in the frame with several others.”

Southgate also stopped short of revealing who the 26th member of his squad would be following Trent Alexander-Arnold’s injury.

“We just want to check how we are after the game medically, check we have nothing to go through and will make the decision over the next 24 hours. I will keep my powder dry for now,” he said.