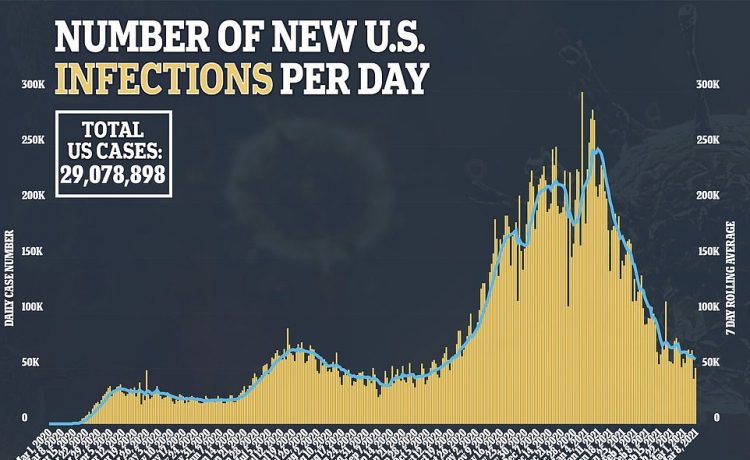 The United States saw a 10 percent decline in the weekly total for news coronavirus cases last week as vaccinations continue to accelerate.

New infections have dropped for eight weeks in a row, averaging 60,000 new cases per day for the week ended March 7.

Meanwhile, deaths linked to COVID-19 fell six percent from last week to a weekly total of 12,242 the lowest since late November and to an average of fewer than 1,800 per day.

On Monday, the U.S. recorded 50,237 new infections – 10,000 higher than the day before but also equivalent to number not seen since early October,

Additionally 719 fatalities were recorded, the third time since the New Year began that fewer than 1,000 deaths were reported.

The average number of COVID-19 patients in U.S. hospitals also fell 16 percent to 44,000 last week, the lowest in more than four months, according to a Reuters analysis of state, county and federal data.

Despite the positive trends, health officials have warned that the country could see a resurgence in cases as more infectious variants of the virus have been found in nearly every state. 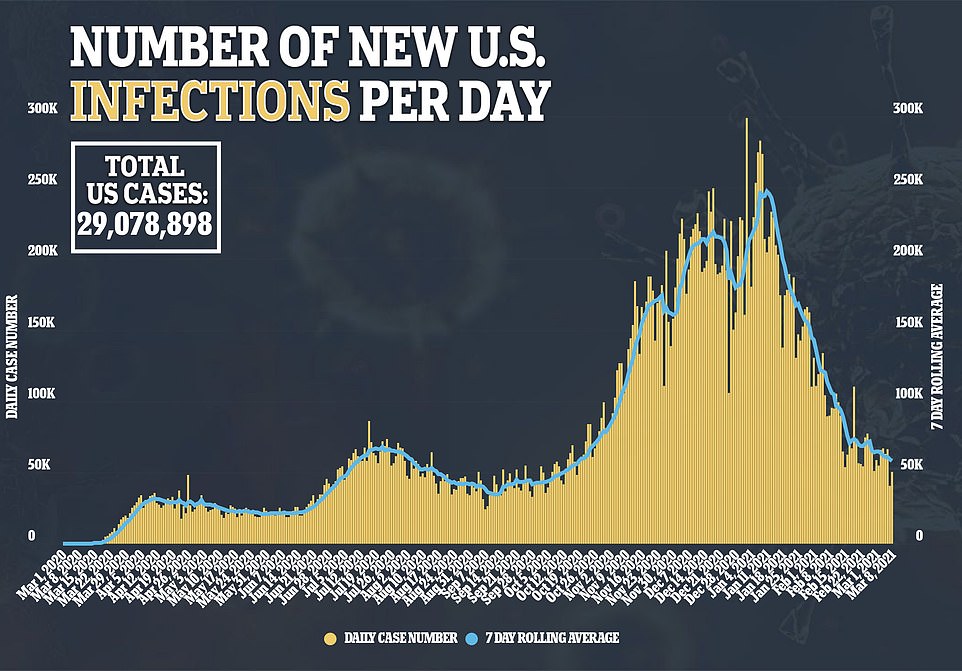 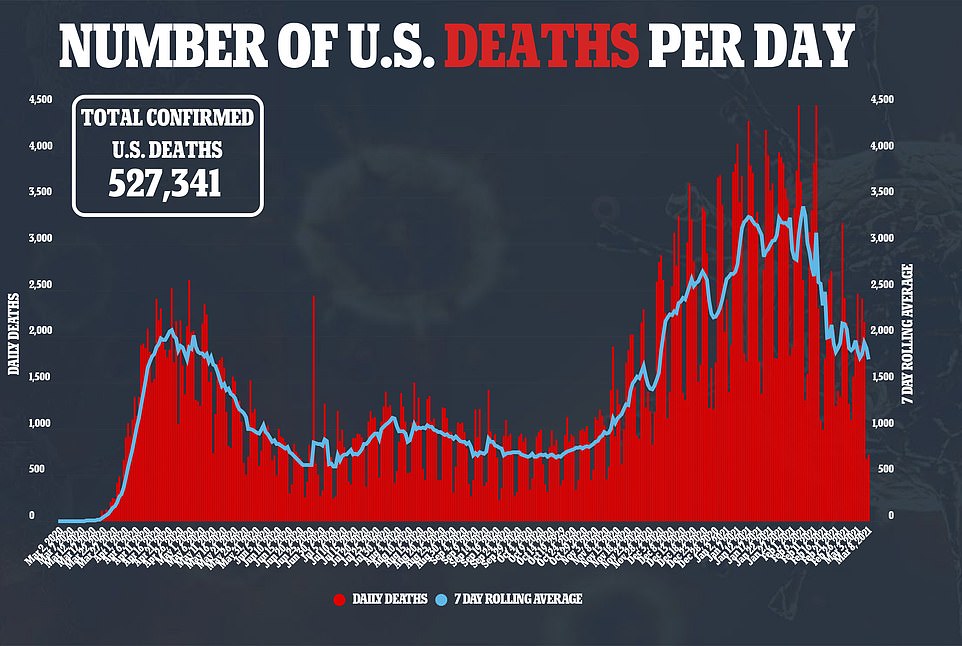 Deaths linked to COVID-19 fell 6% last week to a weekly total of 12,242, the lowest seen since late November 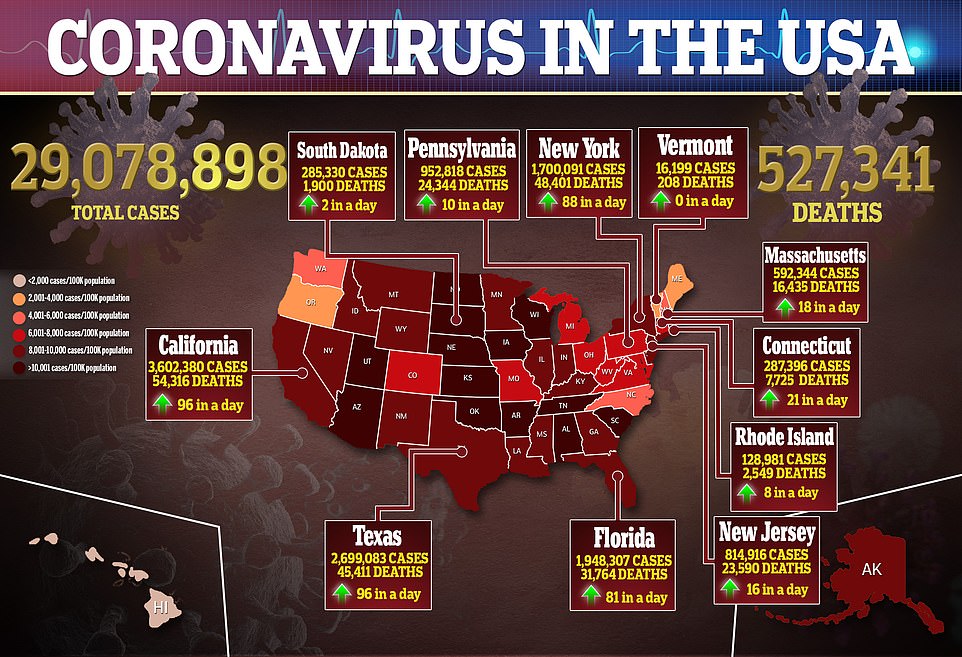 On Monday, the U.S. recorded 50,237 new infections and 719 fatalities, some of the lowest figures seen since early October 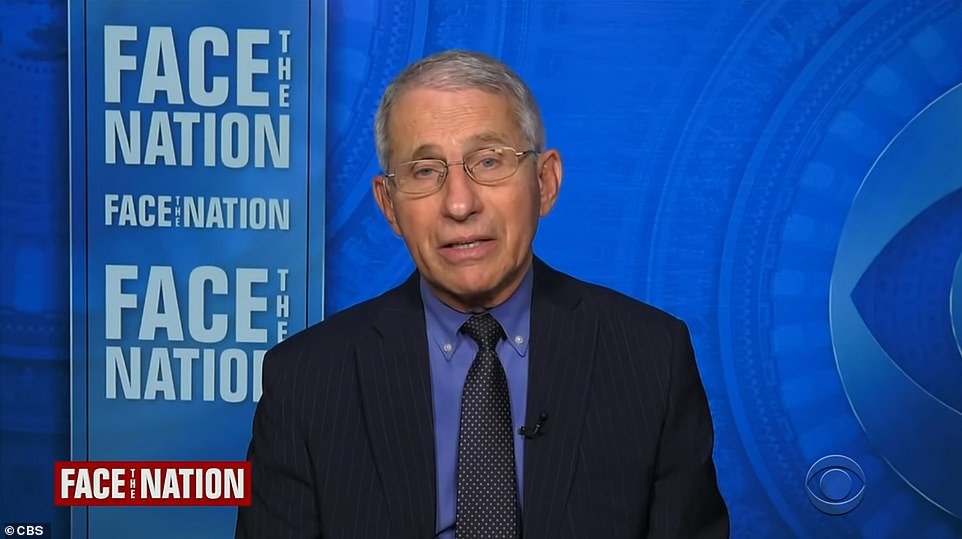 Dr Anthony Fauci said on Sunday (pictured) he is worried that infections, which were coming down sharply, are starting to plateau at about 60,000 per day

According to a Reuters analysis, 13 out of 50 states reported more new infections last week compared with the previous seven days.

This is down from 29 states that were reporting infections on the upswing.

Dr Anthony Fauci, the nation’s top infectious disease expert, has urged the nation to keep most pandemic restrictions in place until new cases fall to under 10,000 per day and until vaccination efforts ramp up even more.

On CBS’s Face the Nation on Sunday, he said he is concerned that infections, which were coming down sharply are starting to flatten.

‘Historically, if you look back at the different surges we’ve had, when they come down and then start to plateau at a very high level, plateauing at a level of 60 to 70,000 new cases per day is not an acceptable level,’ he said.

‘That is really very high.’

Fauci said the situation in European countries is a forewarning for the U.S. because their patterns occur a few weeks ahead of the States.

In Finland, the government declared a state of emergency on Monday due to rising COVID-19 infections while, in France, the number of people in intensive care is at the highest level since the end of November.

According to Fauci, Europe saw a nine percent increase in cases in the past week after the continent hit a plateau. 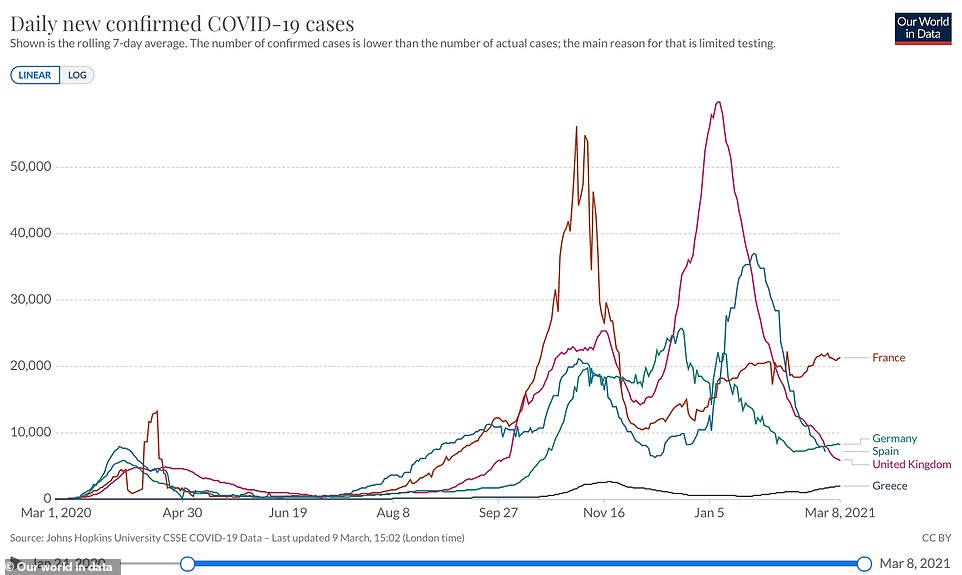 Fauci said several counties in Europe saw a plateau of cases in late February and now are starting to see a rise, with about 9% this week compared to last week 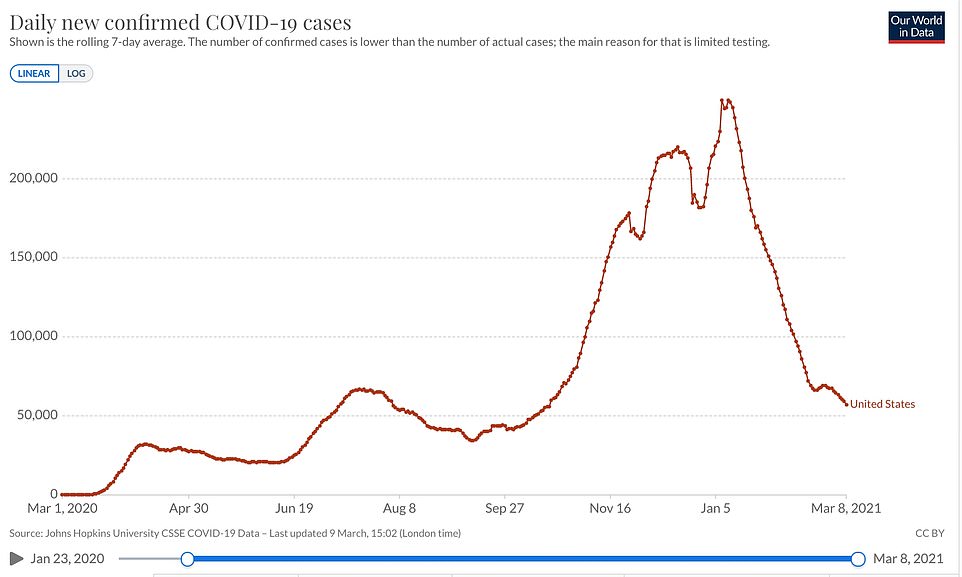 Because the coronavirus pandemic in Europe seems to play out a few weeks before the U.S., Fauci is worried it is a sign of what is to come

‘So the message we’re saying is that we do want to come back carefully and slowly about pulling back on mitigation methods,’ Fauci said.

‘But don’t turn that switch on and off because it really would be risky to have yet again another surge, which we do not want to happen because we’re plateauing at a- quite a high level.’

He repeated his fears on Tuesday, during an interview with the Center for Strategic and International Studies.

The declines in cases occurring since mid-January seem to be “going down a little more slowly, which means we might plateau again at an unacceptably high level,’ he said.

To avoid a fourth wave, Fauci said it is vital that states not roll back restrictions too quickly and that Americans receive one of three vaccines approved by the Food and Drug Administration. 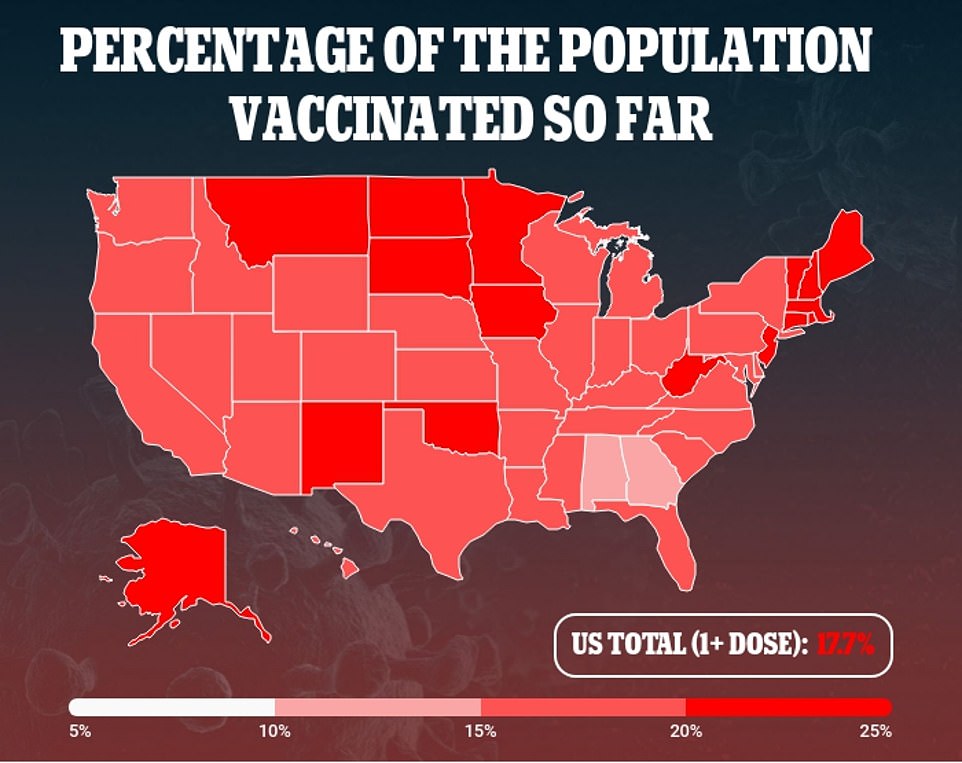 As of Tuesday afternoon, 18.4% of the U.S. population has received at least one dose and 9.7% are fully immunized 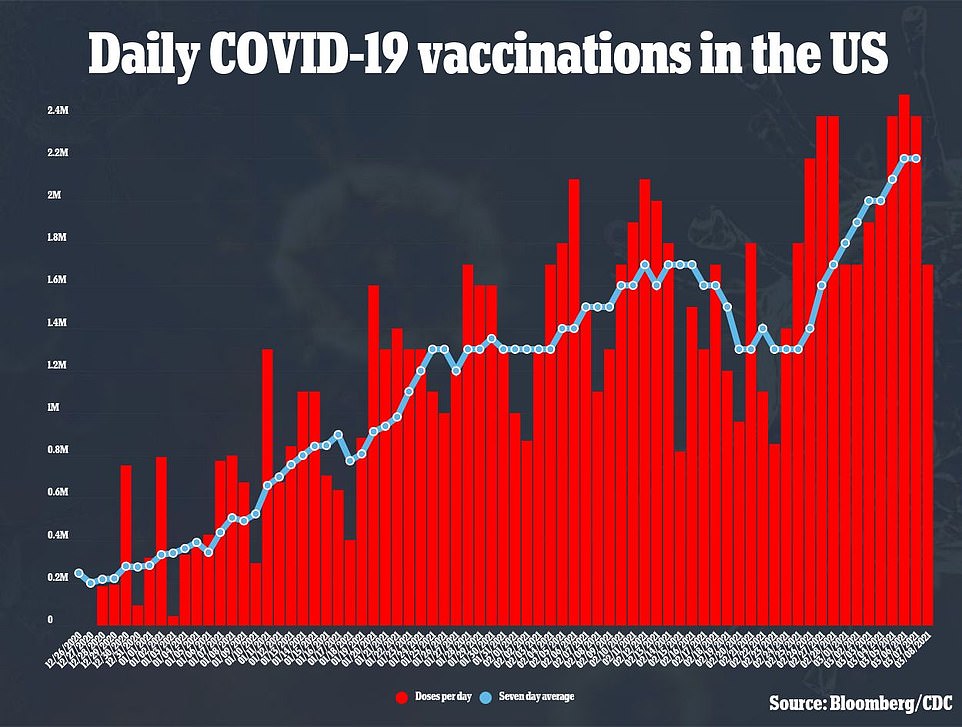 As of Tuesday afternoon, 18.4 percent of the U.S. population has received at least one dose and 9.7% are fully immunized, according to the Centers for Disease Control and Prevention (CDC).

The White House announced on Tuesday that the government will distribute around 18.5 million doses of COVID-19 vaccines this week, fewer than last week because no new doses of Johnson & Johnson’s vaccine are ready to be sent out.

White House press secretary Jen Psaki said at a news briefing that the administration plans to distribute 15.8 million doses of the Pfizer/BioNTech and Moderna vaccine to states, tribes and territories, along with 2.7 million doses going to pharmacies.

J&J’s manufacturing has been slower than expected, and the company was not expected to be able to deliver any doses of its vaccine this week. It is expected to resume shipments of the vaccine later in March.

As of Tuesday morning, more than 123 million doses of the vaccines had been distributed in the United States and 93.7 million shots had been administered, according to data from the CDC. 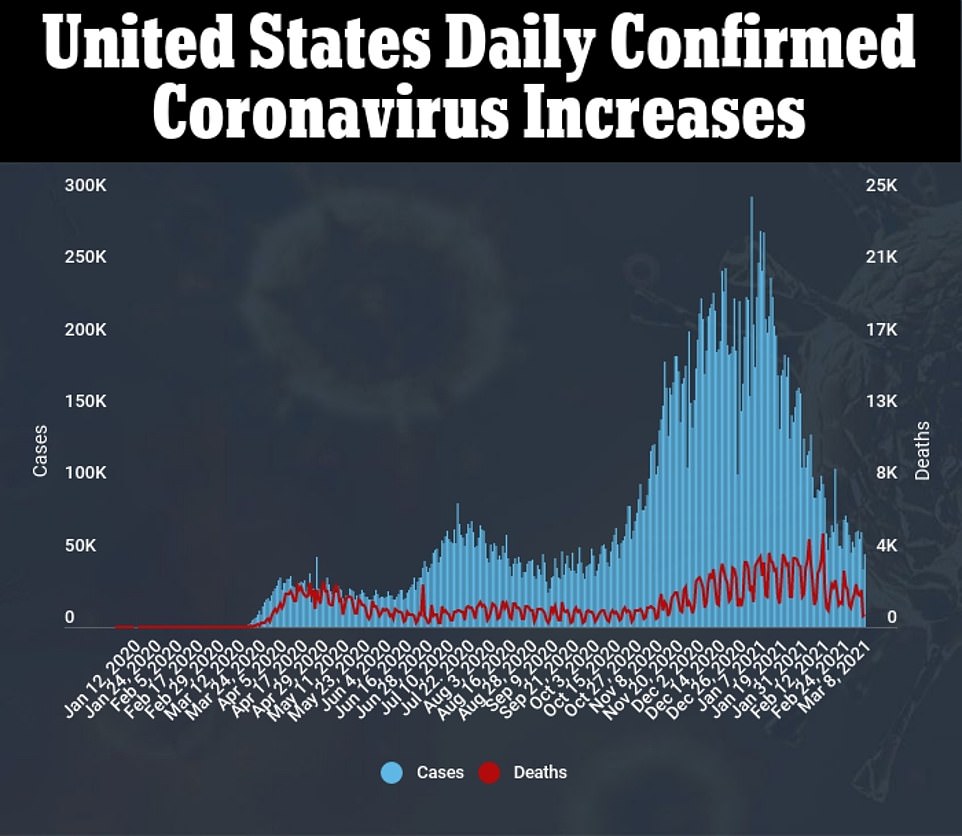 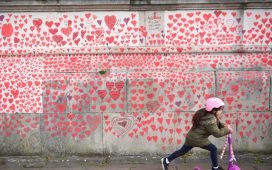