Washington to become the fourth state to ban flavored e-cigarettes

By Associated Press and Mary Kekatos Health Reporter For Dailymail.com

Washington will become the fourth state to ban flavored vaping products amid the slew of mysterious lung illnesses that have sickened hundreds across the country.

Governor Jay Inslee signed an executive order on Friday asking the state’s Board of Health to issue the emergency rule at its next meeting, scheduled for October 9.

The ban, slated to last four months, will apply to products containing nicotine as well as THC, the main psychoactive ingredient in marijuana.

It will not apply at tribal shops, but the governor’s office said the administration is reaching out to tribal governments for their cooperation. 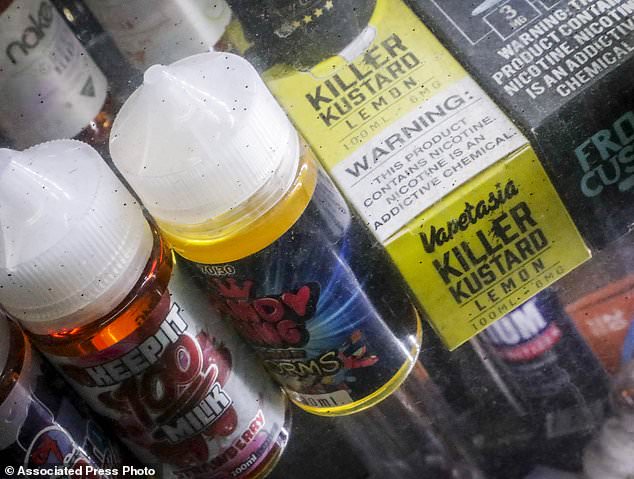 Washington Governor Jay Inslee signed an executive order on Friday asking the state’s Board of Health to issue the temporary four-month ban at its next meeting, which is scheduled for October 9. Pictured: Flavored vaping solutions at a vape and smoke shop in New York

Public health officials have long been alarmed about sharp increases in youth vaping and Washington is no exception.

Health experts say exposure to nicotine at a young age increases the likelihood of long-term addiction and other problems such as lung disease.

‘We need to act for the public health of our people,’ said Inslee. ‘I’m confident this executive order will save lives.’

New York, Michigan and Rhode Island were the first states that have announced at least temporary bans.

Meanwhile Massachusetts has gone the farthest, issuing a four-month ban on all vaping products – flavored or not.

The vaping industry has been heavily criticized for marketing flavors such as vanilla and mango that could appeal to kids.

As of Tuesday, 805 cases of the illnesses have been reported across the US with 15 deaths in 12 states.

The Centers for Disease Control and Prevention said on Friday that its investigation into the outbreak is increasingly focused on products that contain the marijuana compound THC.

Inslee’s order said the ban is necessary because even if a particular vaping ingredient or compound were conclusively linked to the illnesses, the state would have no way to identify which products contain the substance so they could be removed from store shelves.

There are about 4,000 stores in Washington that sell nicotine vaping products, and there are about 480 licensed marijuana retailers who also may sell THC vaping devices or cartridges.

One vape shop owner, Shaun D’Sylva, repeatedly interrupted Inslee’s news conference in Seattle on Friday to accuse him of misrepresenting the issue.

D’Sylva, who runs Fatboy Vapors in Silverdale, said he and other vape-product vendors are interested in helping people stop smoking tobacco, but that Inslee’s action would cripple them.

Flavored vaping products make up about 85 percent of his sales, he said after the news conference.

‘Is the governor going to say: “We’re going to buy your inventory?”‘ D’Sylva said. ‘When the smoking rate goes up in 24 months I’m going to be sadly saying: “I told you so”.’

The governor said he would like to do more about the public health threat posed by vaping, but he said the state’s authority to do so without further legislation was uncertain.

Inslee said he is asking lawmakers to clarify the authority of the secretary of health to ban products amid a public health crisis even if a specific cause remains unknown.

Go Inside Kylie Jenner's Tropical Getaway for Her 23rd Birthday