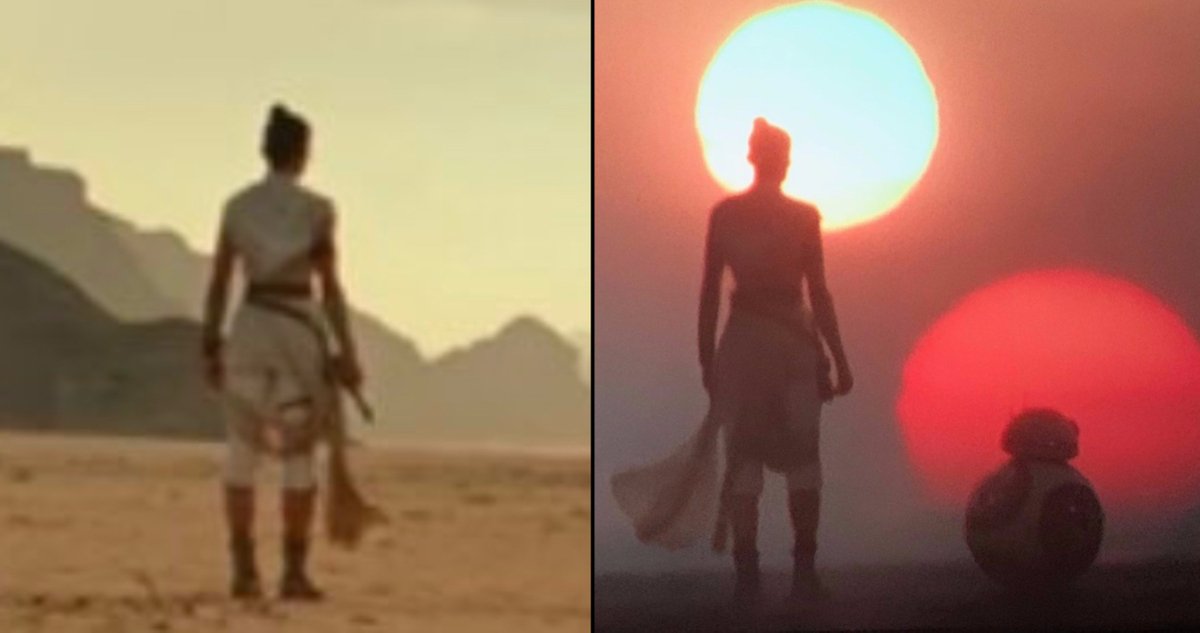 The final shot in The Rise of Skywalker may have been taken from an earlier edited scene. One eagle-eyed Star Wars fan brought his theory to the masses and included some evidence to back it up. In turn, more fans jumped in and they seemingly prove that the ending of the movie was completed at the last minute. Some of the more hardcore fans believe that the ending of the movie changed drastically in the months and weeks leading up to its release. There are SPOILERS for The Rise of Skywalker below, so read ahead at your own risk.

After the death of Ben Solo and the Resistance celebration, Rey heads to Tatooine to bury Luke and Leia’s Lightsabers. She then gets up to leave and we see her staring down the iconic binary sunset with her little friend BB-8. However, is this shot of Rey actually from earlier on in The Rise of Skywalker when she’s getting ready to take on Kylo Ren’s TIE Whisper on Pasaana? Twitter user Benjamin Chewbacca Organa Skywalker Solo was one of the first to point this out on social media. He explains.

From there, the internet sleuths took over, using Photoshop to present their evidence and it really seems like the final shot in The Rise of Skywalker was thrown together rather quickly after the fact. Sure enough, Rey’s stance from the final scene fits right over the Pasaana scene perfectly. Another user then pointed out that she has her backpack in the Tatooine scenes, except for the closing shot.

This goes into further theories that believe Ben Solo was not supposed to die in The Rise of Skywalker. During the controversial Reylo moment, Rey can clearly be seen saying something to Ben Solo, but the dialogue has been cut out. Now, Star Wars fans are calling on J.J. Abrams to release the original ending of the movie, though that will probably never happen. There are definitely some questionable editing decision made in the final cut.

J.J. Abrams and Chris Terrio took on a huge job when they agreed to step up for The Rise of Skywalker. While Rian Johnson took chances with the franchise, he was torn apart by fans for doing so. Abrams and Terrio went for the fan service approach, which seems to have worked out well for them, especially when looking at fan reviews and the box office numbers. Whatever the case may be, it sure looks like the movie was going to end in a completely different way. You can check out Benjamin Chewbacca Organa Skywalker Solo’s Twitter findings below.

The shot of Daisy “standing in front of the twin suns” is very clearly taken from the footage of her standing on Passana, waiting for the Tie Fighter. pic.twitter.com/NWtBQUz3Jc

Her left arm is in the same position.

Her right arm is in the same position.

You can even tell they edited out the lightsaber that she is holding.

her feet are in the same positions. Her left foot is straight, but her right foot is turned away, not as straight. pic.twitter.com/G87wZxuzDZ

this physically makes me want to die pic.twitter.com/wnj00mk8zO

i thought you would want the art you just made with JJ talking about this sAtisFYing ENdinG as the soundtrack whoops pic.twitter.com/5WUIEtJhOh

We see you Mouse, now release the alternate ending ?? pic.twitter.com/Y6meAJjbSP

to add: bens hair length. clearly shot far enough between each other to let adams hair grow like two inches. that sad face was added later. The death was added later. PROVE ME WRONG. pic.twitter.com/LYH4BkdbUf

it’s embarrassing how PAINFULLY OBVIOUS it is that SHE’S TALKING to him in this scene and how clearly HE’S LISTENING to her……and she says a LOT MORE than just a sentence pic.twitter.com/awFYOjSY3i