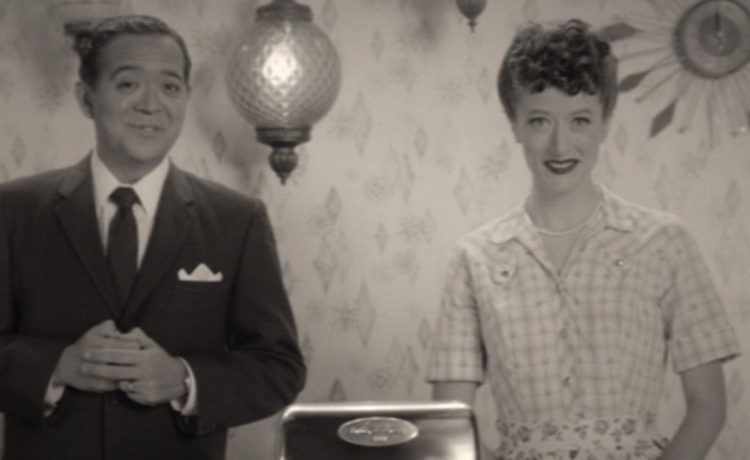 WandaVision is upon us, friends, which means it’s time to get excited about the MCU again. The Disney+ series, starring Elizabeth Olson and Paul Bettany, throws The Avengers’ reality-manipulating sorceress Wanda Maximoff and erstwhile nerdy android Vision into a sitcom universe where they live as husband and wife. They charmingly fumble their way through cliché sitcom plots dealing with wacky neighbors and overbearing bosses and get into countless hijinks, all in front of a live studio audience. However, something is wrong here, and as the series progresses, strange and sinister clues begin to leak into their perfect world hinting at a grim reality that neither Wanda nor Vision are ready to face.

After years of having every stage of the MCU already mapped out for us, it’s beyond fun to be watching a new Marvel story and having exactly zero idea where it’s going or what it’s building up to. (Note to Marvel – please stop laying out your six-year slate of movies for us, it’s way more fun when we don’t know what to expect.) And while it’s made pretty clear early on that Wanda is at least in control of this universe if she didn’t create it entirely, the rest of the mystery of WandaVision is as intriguing as it is dense, with multiple Easter eggs in each episode leading to several possible theories about what exactly is going on.

Easily the most cryptic part of each episode are the commercial breaks – brief minute-long interludes that interrupt each episode to deliver an in-universe advertisement that starts out vaguely bizarre and gradually gets more disquieting as it progresses. These commercials are packed with MCU references, and for the next several weeks, I’m going to do my best to break each one down and extract whatever clues might be hidden within. I’ll be updating this article as each new episode premieres, so be sure to keep checking back to see what you may have missed.

As far as my brain can theorize, this could mean one of two things. Either the two actors in the commercials are S.W.O.R.D. agents using the format of commercials of the era to try and subtly communicate with Wanda without tipping her off or freaking her out, or the commercials are a manifestation of Wanda’s subconscious fighting against the dissociative reality she’s created. Either way, at this point it seems like the goal of the commercials is to gently lead Wanda back to reality.

The first episode breaks for an ad extolling the virtues of the Toast Mate 2000, a stereotypical “space age” kitchen appliance from the 1950s. It’s essentially a sleek toaster oven, with a lower heating compartment for warming and/or reheating food. (Remember, this episode is set before microwave ovens were available for home use.) It begins with a nameless Commercial Man (Ithamar Enriquez) standing in a kitchen with tacky food-themed wallpaper and an old clock on the wall reading 6:00. On the table in front of him is a junk toaster adorned with three ribbons that burns the hell out of some toast. He subtly berates us for being so foolish as to use this obvious clunker to cook bread for our husbands before moving on down the line to a slightly different kitchen setup. The wallpaper is the same, but the light fixtures are more modern, as is the clock, which now reads 12:00. A nameless Commercial Woman (Victoria Blade) dressed like a stereotypical housewife of the area stands quietly off to the side. He introduces the Toast Mate 2000 from Stark Industries, a combination toaster and food warmer that absolutely embarrasses whatever bucket of bolts we were using previously. The woman looks directly into the camera and says, very deliberately, “Say. This machine has some shine.”

She drops in some toast and pushes the lever down, which makes the same sound as Iron Man’s repulsor blasts. As the cook timer counts down, the man begins reciting different dishes you could reheat with the Toast Mate 2000’s lower food warmer, specifically naming meatloaf, cherry pie, and open-faced cheese sandwiches. The timer begins beeping rapidly the instant he says the word “meatloaf,” and we see that the light on the front of the Toast Mate 2000 has begun to flash red. This is the first bit of color we have seen in the series. The timer beeps more rapidly until the light flashes orange and the timer finally stops. The colored lights could be a reference to the colors of Iron Man’s armor. We then cut to a glamour shot of the Toast Mate 2000, complete with the product’s slogan: “Forget the past, this is your future!”

Obviously, there are a ton of direct references to Iron Man here – Stark Industries, the color of the timer lights, and the sound the toaster level makes when the woman depresses it. The two clocks reading two separate times doesn’t seem to have any immediately obvious significance, but some pattern may emerge in future commercials as the series continues. There also doesn’t seem to be anything significant about the three dishes the man chose to highlight, unless the timing of the accelerated beeping with the onscreen appearance of meatloaf was an incredibly subtle hint that musical icon Meat Loaf is about to join the MCU. Finally, the slogan “Forget the past, this is your future!” could be interpreted as Wanda’s own psyche telling her to repress everything that happened with Ultron and Thanos (and, specifically, Vision’s death) and accept this sitcom world as her new, permanent reality. The other possibility is that all of the references to Iron Man and Stark Industries are alluding to the Stark Industries bomb that killed her parents, which is what drove her and Piotr to Strucker, and subsequently to Ultron, before Wanda finally joined the Avengers – “Forget the past (Iron Man killed your parents), this is your future (joining Iron Man and the Avengers).”

This commercial opens with the same Commercial Man and Commercial Woman, silently playing out a scene as a husband and wife getting dressed up for some incredibly formal evening engagement. He adjusts the bowtie of his tuxedo in front of a mirror as she slinks out and helps him smooth out his jacket. An announcer informs us that the two most important accessories a man can have are his wife, and his Strucker watch. We briefly see the watch on his wrist, with the hands pointing at 9 and 2, or roughly 9:10. The man and woman, seemingly pleased with their respective appearances, head out for the night, and we cut to a close-up shot of the Strucker. The hands on the watch are now pointing at roughly 3 and 8, or approximately 2:42. The faceplate reads “Strucker, Swiss Made, Hydra 1000M,” with the Hydra logo proudly displayed in the center. The ticking of the watch begins to rapidly increase as the announcer reads the Strucker slogan – “Strucker: He’ll make time for you.”

First off, the obvious connection is Strucker (Thomas Kretschmann), whom you might remember as the villainous Hydra operative who was seen experimenting on Wanda and her brother Piotr during the post-credits scene of Captain America: The Winter Soldier. He also appeared in Avengers: Age of Ultron, in which the titular insane robot Ultron absolutely murders the shit out of him. But the important thing here is that Strucker gave Wanda her powers, giving her a permanent connection to Hydra.

The slogan “Strucker: He’ll make time for you.” paired with the fact this product is a watch seems to be hinting towards the true nature of the sitcom reality Wanda has created. It might be telling us that this is a pocket universe that exists outside of time, and considering we’ve already seen how Wanda can rewind time and manipulate reality, this makes complete sense. However, the slogan specifically says that Strucker will make time for you (the pronoun “he” is extremely conspicuous here). Could that mean that Strucker is somehow alive, and has somehow trapped Wanda in this reality? That seems pretty unlikely, but the fact that the wording of the slogan points so specifically at Strucker himself is worth noting. It’s also worth noting that Strucker gave Wanda her powers by experimenting on her with the Mind stone (the same stone that Ultron used to bring Vision to life), and not the Time stone, but time is partially a perception of the mind, so who knows.

WandaVision Episodes 1 and 2 are now available to stream on Disney+. New episodes of WandaVision premiere every Fridays. For more, check out our recaps of Episode 1 and Episode 2.

If the first two episodes of ‘WandaVision’ tell us anything, it’s that you need to keep your eyed peeled.