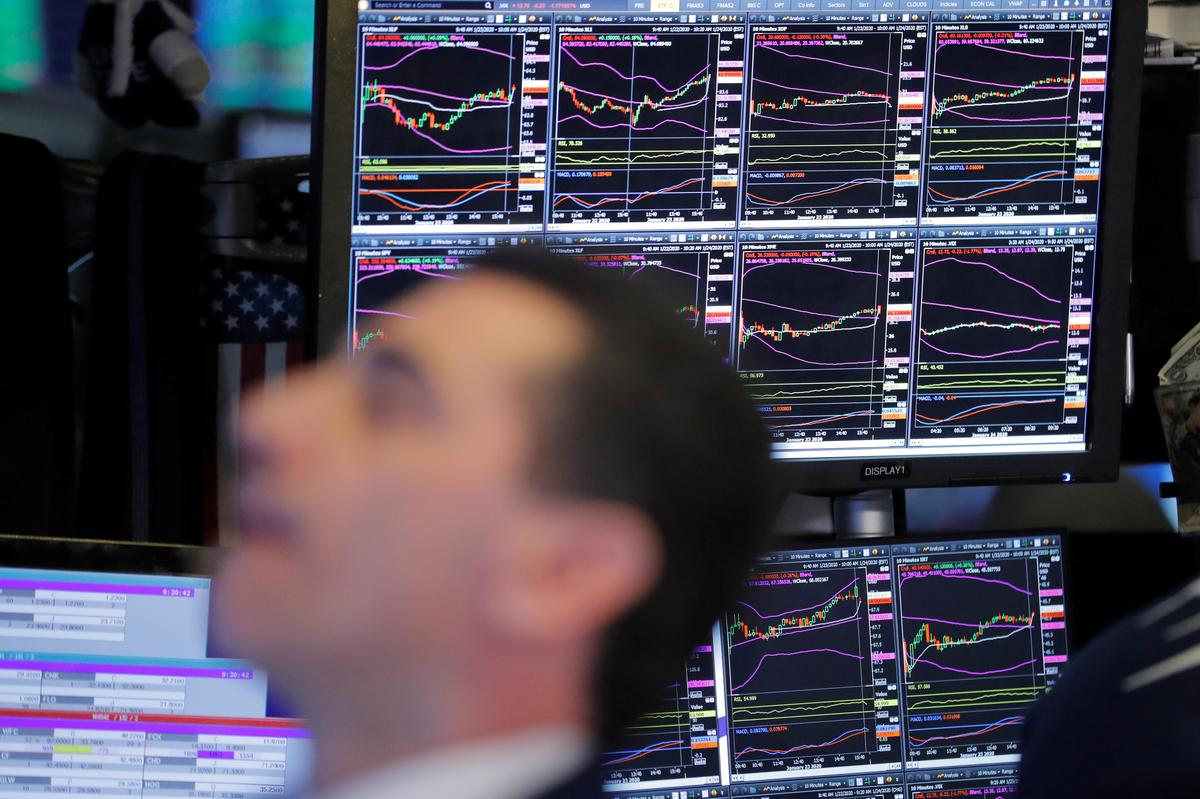 (Reuters) – Wall Street’s main indexes fell more than 1% on Monday as investors worried about the economic fallout of a virus outbreak in China that has prompted the country to extend the Lunar New Year holidays and businesses to close some operations.

The benchmark S&P 500 was jolted off record highs last week as China locked down several cities and curbed travel, reminding investors of the deadly SARS virus that killed nearly 800 people in 2002-03 and cost the global economy billions.

Travel-related stocks, including airlines, casinos and hotels, were the worst-hit on Wall Street, while shares of sectors exposed to China’s growth, including technology, materials and energy, pressured the markets.

“We’d a strong market heading into the year and there was a little bit of over-confidence,” said Jason Pride, chief investment officer of private wealth at Glenmede in Philadelphia.

“5-10% corrections are typical for any given year in equity markets. Maybe this time around, there is a larger economic risk posed by this outbreak because the epicenter of the outbreak (China) is exactly the reason for concern from last year.”

Yum China Holdings Inc (YUMC.N) slid 4.3% after the company said it had temporarily closed some of its KFC and Pizza Hut stores in Wuhan, the epicenter of the outbreak.

The death toll in China rose to 81 on Monday and a small number of cases linked to people who traveled from Wuhan have been confirmed in more than 10 countries, including Thailand, France, Japan and the United States.

The rush to safe haven assets sank U.S. Treasury yields to three-month lows, putting pressure on lenders. The S&P 500 banks index .SPXBK was down 1.0%. [US/]

The S&P energy index .SPNY dropped 2.4% as crude prices fell below $60 per barrel on fears of slowing oil demand following the outbreak. [O/R]

Fourth-quarter earnings will kick into high gear this week with 141 of the S&P 500 companies, including Apple, Microsoft Corp (MSFT.O) and Boeing Co (BA.N), expected to report.

FILE PHOTO: A trader works on the floor of the New York Stock Exchange shortly after the opening bell in New York, U.S., January 24, 2020. REUTERS/Lucas Jackson

No.1 U.S. homebuilder D.R. Horton Inc (DHI.N) rose 2.2% after raising the upper end of its forecast for full-year home sales.

READ  What to do if you hate your boss

Reporting by Sruthi Shankar in Bengaluru; Editing by Saumyadeb Chakrabarty and Sriraj Kalluvila

Debenhams to be wound down putting 12,000 jobs at risk – business live

What is the cold weather payment and who is eligible in the UK?

Kristen Stewart on why it’s still important to tell 'coming out' stories: 'To think the fear has been sucked out of telling everyone is ignorant'

Boris Johnson must be honest about risk of third lockdown in January, MP demands

500 Greatest Albums Podcast: How Lucinda Williams Took the Long Road to a Masterpiece