56 min Davies feeds Gnabry, who’s much livelier this half, and he megs Foyth then nudges inside for Lewandowski, but Capoue is there to intercept.

55 min “I must confess, I was roaring on Villarreal (pop 50k) against the English team I have supported since I was 5 in the Europa League Final,” emails Niall O’Keefe. “Can you imagine the support the Villarreal People would get if they somehow make it to the final? It’s fun to stay … go Villarreal.”

53 min OH MY ABSOLUTE COMPLETE AND UTTER DAYS! Lo Celso, who’s been superb now he’s not got Mourinho nausing him up, spreads to Moreno out on the right. He steps inside, has a look, and from just outside the box, swipes across the ball to send a wobbler screeching flat towards the far corner … but it cracks the base of the post and bounces to safety! What an effort that was! How crucial might it be when this tie is over, next week?

51 min “I would like to know the types errors 5that Bayern are making on the pitch tonight,” says Taofick Adahou. “Are they giving away balls too cheaply?”

Not really. It’s more than they’re struggling to find space because Villarrreal are defending the width of the box superbly, and Bayern aren’t getting close enough together or moving the ball quickly enough to pick holes in their structure.

50 min Bayern look much better now, a lovely flick from Musiala allowing Muller to move out to Davies. He lays back to Gnabry, just inside the box, and his low shot whistles wide, with Muller missing his diverting touch by fibres – though he might’ve been offside.

49 min At Turf Moor, Burnley have equalised; it’s now 2-2 in the relegation six-pointer.

48 min Kimmich and Muller combine to set Davies away down the left and for the first time in time – perhaps in the game – he’s in space. So he cuts in, opens the angle, and drags a poor shot past the near post.

47 min Goodness me! Benzema has completed his hat-trick, and Chelsea have conceded seven goals at home in their last 86 minutes of play!

46 min “Unai Emery at Arsenal,” begins Kári Tulinius. “I think Emery was undone at Arsenal because he was fighting the last war. Emery’s last season at PSG was a mess. He seemed semi-traumatised by La Remontada, and it didn’t help that the protagonist of that game, Neymar, was now making his life difficult in his own dressing room. So by the time he got to Arsenal, he was both tactically overcautious, and on a hair-trigger for the least bit of ego. Poor Özil got the brunt of both. By the time he got to Villarreal, he’d shaken that off.”

That’s an interesting angle, and if you couple it with the post-Wenger malaise, that’s a lot to get over.

Our players are back with us. What a second half is in prospect.

That was a really engrossing half. Villarreal have been superb, Bayern have been poor.

45+1 min Danjuma finds space well, feeds Capoue, and his shot is deflected behind – for a corner that comes to nothing.

44 min Kimmich finds Muller down the right, in space and with time … but his dinked cross is way behind Lewandowski, who I’d forgotten was playing. What a compliment that is to Villarreal.

43 min Kai Havertz has pulled a goal back for Chelsea; they now trail Madrid 2-1.

Moreno was offside in the buildup, so the goal is chalked off. But still, what a half from the Yellow Submarine.

That is not a misprint! This was a colossal fluke, Coquelin crossing from the left only for the ball to sail over Neuer and inside the far side-netting, but don’t be deceived as the keeper was: it came after a lovely move from Villarreal, who move the ball beautifully from middle to left, thorugh Capoue, Parejo and Danjuma – they’ve earned this. Wow!

39 min Bayern keep knocking it about, but don’t seem to have much clue about how they’re supposed to create.

37 min The other thing Bayern might consider is changing formation to 4-4-2. Two strikers, and suddenly it’s not so easy for Villarreal to clear crosses.

35 min Other hand, Goretza may have to wait, because at 1-0, Bayern will still be extremely confident of winning the tie. But removing Musiala for him, because that’s who it’d be, might leave them (even) more open in centrefield.

34 min If I was Nagelsmann – for avoidance of doubt, I’m not – I’d be sending Sane on at half-time to keep the width on the left. I know he’s played on right for Bayern, but against opposition like Villarreal, they need to make the pitch as wide as possible.

32 min Villarreal win a free-kick down the right and Parejo applies the outswinger, Torres glancing a header a few yards wide. The home side look as likely to score a second as the visitors do a first.

31 min I wonder why Emery failed at Arsenal. I guess he might’ve had more time, but I don’t think he could’ve complained about getting fired than he did. Ultimately, he inherited a poor squad without the money to repair it, and the best players at the club now are all kids, who weren’t ready when he was there.

30 min Gnabry and Lo Celso leap with feet up to contest a 50/50; the latter wears studs of the former on the instep, a real sair yin, but he’ll be fine.

29 min Now here come Villarreal, Lo Celso caressing a lovely ball left and over the top for Moreno with the outside of his boot. But there’s not quite enough on it so his mate has to wait for it, and Pavard nips in to concede the corner; it comes to nowt.

28 min Coman slides a clever ball down the side of the box for Muller, who we’ve barely seen tonight; he can only funnel it back, and eventually Hernandez loses patience, skewing a shot wide of the near post.

26 min Hernandez might’ve hurt his thigh stretching into a challenge, but that’s the least of Bayern’s worries. The question for Julian Nagelsmann is whether Villarreal are making his side look bad because that’s what they do, or whether he needs to change tactics, personnel, or both.

26 min Eeek, Benzema has done it again! The holders are in colossal trouble.

24 min There’s been a development at Stamford Bridge! Karim Benzema has put Madrid in front! I remember going to watch Man united in Lyon in 2008 and the locals regaling us with tales of how good he was; he duly scored a belter that night, and what a player he went on to become.

23 min Lewandowki holds up nicely then spreads to Davies, but his cross is headed away and Kimmich welts the loose ball wide.

22 min Albiol sees Gnabry coming, getting his body in front of the ball and wearing the frustrated foul. He’s improved so much under Emery.

20 min Bayern are back bossing possession, but Villarreal move in such concert, that it’s hard to pick holes. They need to get in little clusters, then move the ball much quicker, but as I type that, Kimmich pumps another cross directly at Rulli.

18 min After a fair start, Bayern have done very little. They don’t have the rhythm they once did, and I’d not be surprised to see Goretzka sooner rather than later after half-time if they don’t smarten up.

16 min Bayern win a free-kick out on the left and Kimmich will curl it in, but directly into Rulli’s Uhlsports.

16 min Has anyone reworded this to be about Villarreal’s ground yet?

15 min he kick is flicked on, but straight to Neuer.

15 min Bayern are rattled, Pavard gulled into fouling Danjuma, who does well to get his body between man and ball. Parejo will swerve in the free-kick…

14 min Elsewhere, a second Richarlison penalty has put Everton in front at Burnley. Tim de Lisle has the latest.

12 min Ultimately, this is the thing with Bayern: they concede goals. Their defence is no worse than City’s, but they don’t keep the ball or foul tactically as well, so find themselves exposed more frequently. Obviously they could still beat anyone over two legs or in a final, but I couldn’t back them against Liverpool or City unless they changed the way they play. 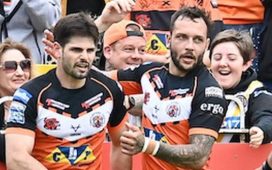