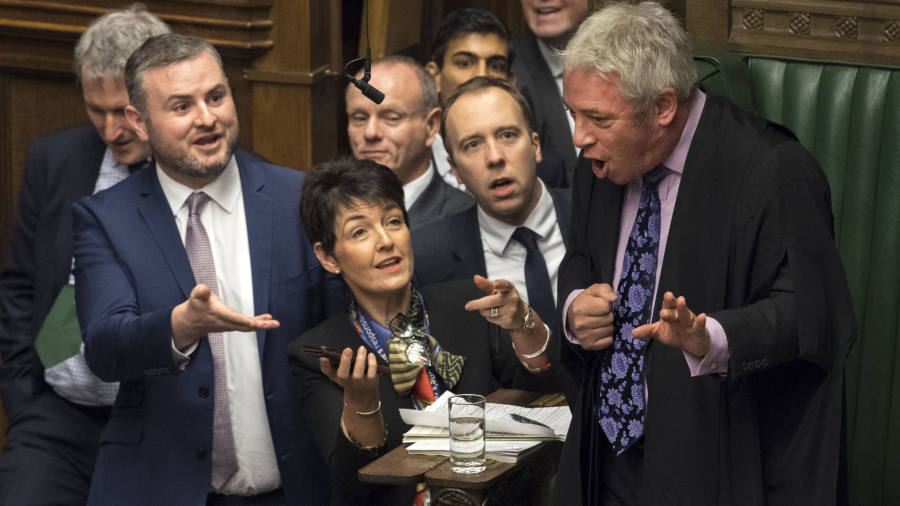 Towards the end of his memoirs, John Bercow reflects on what he would like to do after a turbulent decade as Speaker of the UK House of Commons. “I hope to contribute usefully in the House of Lords,” he says wistfully. Over 435 pages he sets out why he may not get the chance.

Bercow’s hopes of moving down the corridor at Westminster to the upper house depend on getting the nod from Prime Minister Boris Johnson, one of many enemies with whom the former Speaker has scores to settle.

Johnson, whose epic clashes with Bercow defined the end-game of Brexit, is “unable to string sentences together” and only occasionally reaches the heights of “passably adequate politician”. Michael Howard, the former Tory leader, is less fortunate. “Some people are cold. Others are oily. Michael’s peculiar distinction was to combine coldness and oiliness in equal measure.” Theresa May, he writes, is vying with Anthony Eden for the crown of the UK’s worst postwar prime minister.

For many Conservatives, Bercow is a puffed up turncoat, a Tory rightwinger who ended as a dripping wet liberal, the Speaker who used his position for political ends, to frustrate Brexit. To his admirers he is a moderniser who helped to put the House of Commons at the heart of national debate and gave MPs a chance to put the brakes on a catastrophic hard Brexit; the man who installed a crèche at Westminster and refused to invite US president Donald Trump into its hallowed halls.

Bercow is now cashing in on the global fame that his role in the Brexit saga brought him. These memoirs are out just three months after he stepped down as Speaker and he now gives speeches around the world, posing for selfies with fans and barking his trademark “Orderrrr” on demand.

READ  Boots UK store closures – which branches are closing and why?

He tells the story of his journey from a humble background to become the highest commoner in the land, but the reader is left with the feeling that something is missing. And Bercow, verbose in the Speaker’s chair, is hardly less prolix on the printed page.

Brought up in north London, he was heavily influenced by his father, Charles, who was “a believer in hanging and flogging” and an admirer of Enoch Powell’s racist politics. Bullied over his acute acne, short in stature and the subject of occasional anti-Semitic taunts, Bercow had a difficult youth.

“My heart goes out to any child or young person striving to come to terms with the world who is bullied,” Bercow writes. Later, in great detail, he rebuts claims that he later bullied members of his staff while Speaker, presenting himself as a moderniser battling with outdated officialdom. His youthful membership of the rightwing, anti-immigrant Monday Club was “shameful and obnoxious”: “I have sometimes wondered if my own physical inadequacies led me to embrace such an aggressive, macho, control-oriented politics.”

Over the next 25 years, Bercow’s career began a remarkable leftward trajectory. Elected as a rightwing Tory MP, he admits he was primarily a “party hack” obsessed with his own career, with few fixed views and little interest in any particular policy area. He ended up rebelling against the party leadership, supporting causes such as reducing the age of consent for homosexuals, allowing gay couples to adopt and fighting racism. By the time he ran for Speaker in 2009, he was loathed by many Tories, but got the job thanks to backing by Labour MPs.

Bercow offers no satisfying explanation of what brought this transformation. His wife, Sally, is a longtime Labour activist and blamed by some for “corrupting” her husband.

The memoir could have done with more ruthless editing. In one section Bercow devotes pages to critiquing the careers of other MPs, including an inexplicable two pages on the “staggeringly, mind-blowingly” boring former health secretary Andrew Lansley. Perhaps Bercow’s fixation with the careers of other politicians is a reflection of the fact that ultimately he was only the referee — not a principal player — in the Brexit drama. This instant history lacks the perspective of time, but in describing pitched battles at Westminster, it could now be describing another age.

The country, exhausted by the trauma, appears desperate to move on: the Brexit debate and Bercow — bellowing at red-faced Tory MPs — now feel like they belong in the past. Just as Johnson would like it.