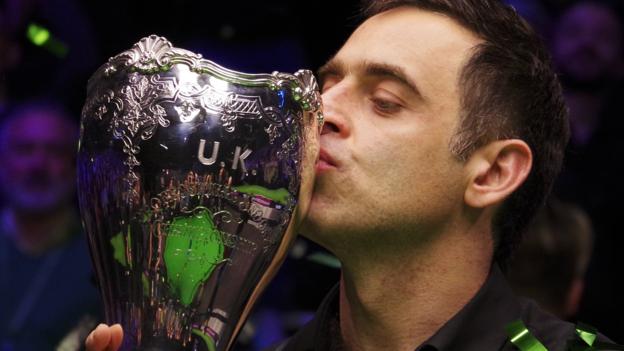 Snooker legend Ronnie O’Sullivan says his longevity in the game is down to his ability to “reinvent” himself.

The 43-year-old won the first of his record-equalling 36 ranking event titles at the 1993 UK Championship when he was 17.

O’Sullivan, the defending champion and world number two, begins his quest for an eighth UK title against Ross Bulman on Thursday evening.

“Whatever job you are in, you have to work on being better at it,” he said.

“You have to work on your weaknesses and try to stay ahead of the pack.

“You have to learn to adapt and reinvent yourself, whether it is short or longer formats. Longer formats never really suited me, but I have learned to become better at playing the longer matches.”

O’Sullivan, who beat Mark Allen in the 2018 final, says his record at the UK Championship gives him great confidence to add to his title collection and move one ahead of Stephen Hendry in all-time ranking wins.

“There are many tournaments I have won multiple times,” O’Sullivan added.

“The UKs stand out more because it is one of the three majors and to win one of those events is special. And the top players rise to the occasion.

“The Masters I think I have about 13 finals and only seven wins, so not a great conversion rate but it’s still good to win seven times. The UKs I have eight finals and seven wins so that’s a lot better.”