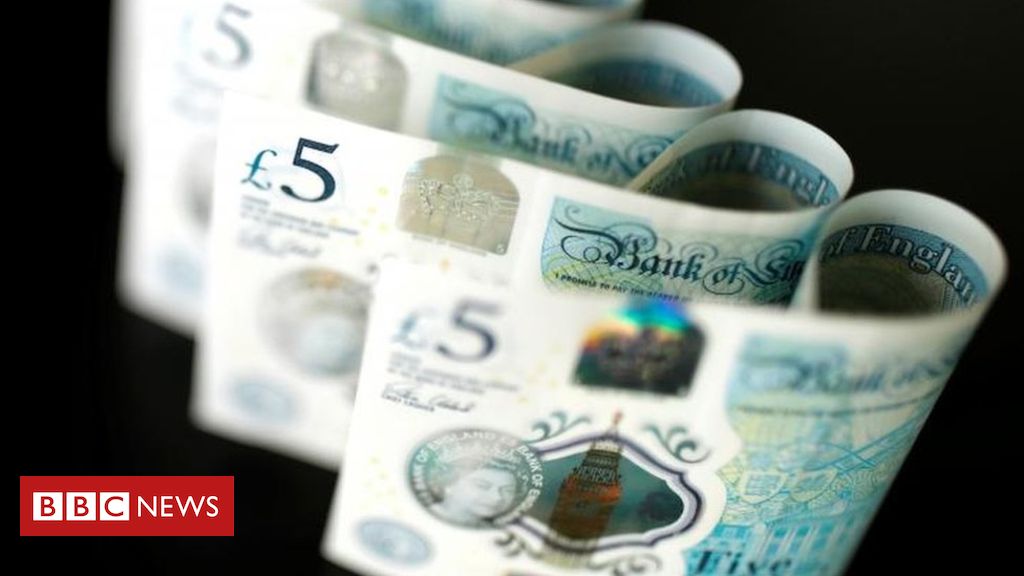 De La Rue, the company that prints the UK’s banknotes, has said there is a risk that the firm will collapse if its turnaround plan fails to work.

The announcement came as it suspended its dividend and reported a loss in the first half of its financial year.

De La Rue said its warning was based on a worst-case scenario.

However, it concluded that there was “a material uncertainty that casts significant doubt on the group’s ability to operate as a going concern”.

All current Bank of England banknotes are printed by the firm at its site in Debden, Essex.

It is unclear what would happen if the firm got into difficulties, but it is likely that a rival would take over its Bank of England contract. Its main competitors are all based outside the UK.

De La Rue has faced some big setbacks in the past two years, including the loss of the post-Brexit UK passport printing contract in March 2018.

In May last year, it had to write off £18m after Venezuela’s central bank failed to pay its bills.

The company is also under investigation by the Serious Fraud Office in connection with “suspected corruption” in South Sudan.

It appointed a new chief executive, Clive Vacher, in October as part of a management shake-up.

What is De la Rue?

Around 11% of the 171 billion banknotes issued globally in 2017 were printed by a handful of commercial printers. De La Rue is now the largest of these firms.

It began producing banknotes in 1860, first for Mauritius and then elsewhere. Today it produces enough notes each week that if stacked up would reach the peak of Everest twice.

‘Teetering on the brink’

De La Rue reported a £12.1m pre-tax loss for the six months to 28 September, compared with a £7.1m profit in the same period last year.

In its results statement, the company said it was accelerating its restructuring plan, including a reduction in overhead costs.

It is also planning new banknote security feature products to bolster its position in the “increasingly competitive” banknote market.

“Bad management and decisions seems to be the main reason for the malaise.”

Investors sometimes wonder whether a company’s board of directors can, in the short term, have much sway over a company’s trading.

The scepticism is warranted: boards normally comprise a small number of executives and a larger number of non-executive directors, who have no involvement with day-to-day operations, and there are plenty of examples of companies going off the rails without the board suspecting anything was wrong.

Today’s results from De La Rue show, however, that boards are vital. The banknote and secure-printing company turned in a disastrous set of numbers – a £10m operating loss, a string of one-off charges and mounting debt – which it blamed on falling demand and too many companies chasing too few contracts.

But it also admits that a period of unprecedented turmoil at the top has not helped, with the chairman, chief executive, finance director and most of the other directors changing in short order.

“The board believes that significant changes in the board and executive teams, along with a restructuring of the business, has contributed to the poor performance of the business in the period,” the results statement says.

“This has contributed to a larger variance between forecasts and performance than has been experienced historically.”

Management matters, and will matter even more in the next few months. The directors warn that if the revival plan put in place by (newish) chief executive Clive Vacher does not yield results, there is a threat to the company being able to continue as a going concern.

In plain English, that means it will have to find more money, either by renegotiating the terms of its bank loans or by asking shareholders to stump up more cash.

READ  Sturgeon vows to drive hard bargain over independence
Share on FacebookShare on TwitterShare on PinterestShare on Reddit
newsgrooveNovember 26, 2019