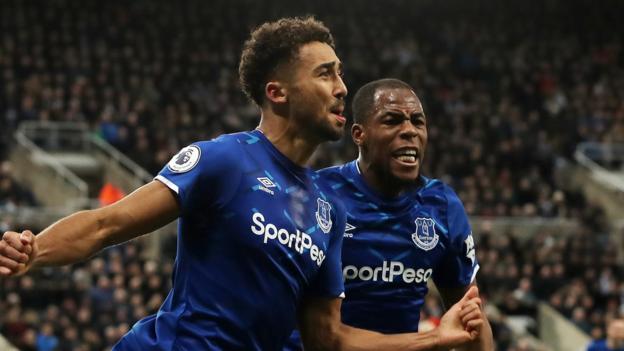 Dominic Calvert-Lewin can become one of the best strikers in Europe, says manager Carlo Ancelotti after his double helped Everton to victory at Newcastle.

The 22-year-old scored the only goal against Burnley on Boxing Day to give the Italian the perfect start to his reign and again produced a brilliant display in attack.

“He is a fantastic striker, in my opinion – fantastic with the head, clever in the box and sharp,” said Ancelotti of the English forward, who now has 10 goals for the Toffees this season.

“I think he is going to be at the top in England and in Europe. He has all the qualities to be a top striker.”

Calvert-Lewin’s opener was a classic poacher’s goal – poking home after Gylfi Sigurdsson’s deflected strike fortuitously arrived in front of him.

Newcastle improved and after Miguel Almiron struck the post, they equalised when Fabian Schar fired home a volley from Andy Carroll’s nod-down.

But six minutes after setting up the equaliser, Carroll’s mistake led to Everton’s winner.

Theo Walcott dispossessed the striker and played a pass out wide to Richarlison. The Brazilian sped down the right and delivered an excellent low cross for Calvert-Lewin, who slid in and scrambled home.

The Toffees move above the Magpies into 10th, with their opponents – level on 25 points – now down in 11th.

Ancelotti brings the best out of young attack

Whatever Italian Ancelotti has said to the Everton attack in the short time he has spent with them appears to have had a positive effect.

Moise Kean, in particular, looks a player reborn. The 19-year-old striker joined from Juventus in a £27.5m deal last summer, but has yet to prove his worth to Toffees fans. At St James’ Park he provided a glimpse of what he could achieve.

The Italian had five efforts on goal and three on target, including one that tested the reflexes of keeper Martin Dubravka.

His link-up play was also exceptional – Walcott should have tested the Newcastle goal after he was found by Kean’s ball from the right.

His partner in attack, Calvert-Lewin, has been scoring in clusters this season and under his new manager has hit form once more.

It is now five goals in his past five in the Premier League – as many as in previous 28. Perhaps more pertinently for Ancelotti and the Everton fans, is that the nine shots on target was the most in a league away game this season. The last time the Toffees managed more on the road was at Swansea in 2011.

This was a second successive defeat for Newcastle and their first at home since August, but Magpies fans need not worry too much.

What the statistics do not show is Carroll’s effectiveness in attack, Jetro Willems’ consistency as an attacking full-back and Almiron’s improvement.

Carroll, who re-signed on a free transfer last summer, was brilliant as the main target man, alongside Joelinton.

He did not find the net on Saturday but gave Mason Holgate and Michael Keane a tough workout at the back – particularly from set-pieces.

And it was Carroll’s assist from a free-kick – his third in his past five Premier League games – that led to Schar’s equaliser.

The Magpies produced 20 efforts but only five on target – Joelinton has not worked out so far for manager Steve Bruce so perhaps a new striker in January would improve those stats.

Newcastle manager Steve Bruce: “I don’t think we deserved to get beaten today. It was important we didn’t lose the match and unfortunately we have, which is the disappointing thing.

“We’re halfway and it’s the first time we’ve suffered back-to-back defeats since August. So let’s dust ourselves down and get ready for Wednesday and the second half of the season.”