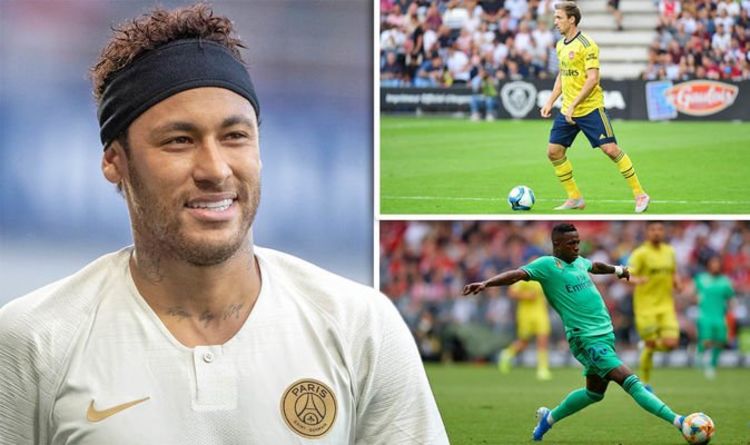 Spanish newspaper El Confidencial claim that the Qatari businessman is far from impressed by the hitman’s desire to leave.

Al-Khelaifi is therefor happy to get rid of Neymar, who both Barcelona and Real Madrid are eager to lure back to La Liga.

Inter Milan boss Antonio Conte reckons former Manchester United striker Romelu Lukaku is more than worth the fee the Serie A giants are paying for him.

“I am very happy and satisfied,” Conte said following Lukaku’s debut against Lecce. “I like working with these guys who have always shown great willingness.

“Tonight, Lukaku showed why we tried so hard to sign him. Lukaku has come into the Inter world in the best possible way, with great humility.

“He is a gentle giant, a giant with a smile. He’s ready to work for the team. Let’s not forget Lukaku cost €65m to be paid over five years, so when people talk about big money spent, it wasn’t even that much.”

Tottenham playmaker Christian Eriksen is unwilling to consider signing a new Spurs deal as long as a move away remains possible.

Eriksen is out of contract next summer and is being offered the chance to boost his wages to a massive £200,000 per week in north London.

However, the Mirror report he is still eager to quit the Premier League for a move to one of La Liga’s big boys.

READ  Ruben Loftus-Cheek will always have to manage back problems, believes Sarri

Real Madrid are understood to be interested in Eriksen, though Barcelona and Atletico Madrid are potential destinations too.

Real Madrid have told Neymar not to disclose his love for Barcelona or they will end their interest in signing him.

Spanish newspaper El Confidencial reckon Bernabeu chiefs could find no way to square snapping up someone who loves their arch-rivals.

So Neymar has been told to keep quiet in public – otherwise one of his potential routes out of Paris Saint-Germain could disappear.

Barcelona are also interested in Neymar but do not have the money to finance a blockbuster cash-based deal.

Rakitic has been one of the first names on the Barcelona team sheet ever since he joined them from domestic rivals Sevilla.

However, this summer he has been linked with Juventus and Paris Saint-Germain as Barca look to fund a move for Neymar.

AS are now reporting Barcelona boss Valverde will not stand in the way of the Croatia international going through the exit door.

Manchester United might not loan out Alexis Sanchez after all with Anthony Martial potentially facing a stint on the sidelines.

Express Sport has reported United are eager to offload flop forward Sanchez, with Inter Milan would-be suitors for the Chilean.

However, the injury Martial suffered in the weekend defeat to Crystal Palace means he may be forced to stay put.

The Guardian reckon United will await the results of scans before deciding whether they can afford to cut Sanchez loose.

Chelsea are preparing to reward Tammy Abraham and Reece James with new contracts following the progress the duo have made this year.

Abraham bagged twice in Chelsea’s 3-2 win at Norwich over the weekend, boosting his chances of being their main man up front this season.

James, meanwhile, has been kept on as Cesar Azpilicueta’s understudy having impressed Frank Lampard and shrugged off competition from Davide Zappacosta.

The Telegraph now report Chelsea are hoping to tie the duo down for the long-term future as Lampard embarks on his reign at Stamford Bridge.

Liverpool bought Fabinho over Jorginho and Lucas Torreira because he edges the duo in the physicality stakes.

Fabinho rocked up at Anfield last summer having seen his stock rise rapidly during a stellar spell at Monaco.

The Athletic reckon they were also in Liverpool’s sights, but that the Reds plumped for Fabinho due to his physical prowess.

Rangers will demand a hefty fee for Alfredo Morelos after seeing how much Celtic received for Moussa Dembele.

That’s according to Sky Sports reporter Charles Paterson, who said: “Rangers are understood to value him as highly as Celtic valued Moussa Dembele. Remember that Celtic sold Dembele to Lyon a year ago for £18m.

“Now, if there was ever an offer that came in of that valuation for Morelos, you’ve have to think Rangers would be prepared to do business.”

Morelos was linked with a move to swap the Scottish Premiership for the English Premier League before the transfer window closed.

Arsenal are prepared to wave goodbye to Nacho Monreal if he makes clear he wants to leave the Emirates this summer.

The Gunners cannot sign a replacement for the Spaniard with the Premier League transfer window closes until January.

However, they are willing to let him go if he tells them he wishes to head for the exit door at the Emirates.

The Sun reckon Arsenal chiefs have decided they will accept £3m for the full-back, who has been linked with Real Sociedad.

Transfer news LIVE: Nacho Monreal has been lined up for a move from Arsenal to Real Sociedad (Image: GETTY)

Paris Saint-Germain remain insistent that Real Madrid must include Vinicius Jr if they are to take Neymar to the Bernabeu.

Parc des Princes chief Leonardo is a huge fan of Vinicius, who linked up with Real ahead of the 2018/19 La Liga campaign.

Leonardo, according to AS, is demanding Vinicius heads to Paris as part of a swap deal which would see Neymar return to Spain.

PSG want the young forward on a permanent basis and are unwilling to consider doing business without him being involved.

The £40m signing, brought in two years ago by Jose Mourinho, is yet to figure for United in the Premier League this season.

Instead, Scott McTominay has been handed a role in midfield alongside fellow former academy stars Paul Pogba and Jesse Lingard.

The Mirror reckon Matic is set to sit down with Solskjaer and discuss his future, with a number of clubs on the continent eager to snap him up.

Transfer news LIVE: Nemanja Matic is yet to play for Manchester United in the league this season (Image: GETTY)

Barcelona are unwilling to pay more than £154m (€170m) in order to take Neymar back to the Nou Camp this summer.

Barca chiefs have held extensive boardroom talks regarding the Brazilian, who acrimoniously left for Paris Saint-Germain in 2017.

And Sport say they have decided they are only prepared to shell out £154m to re-sign the former Santos forward.

Barcelona will only hand over that much if they can first of all take Neymar on a two-year loan with an obligation to buy.