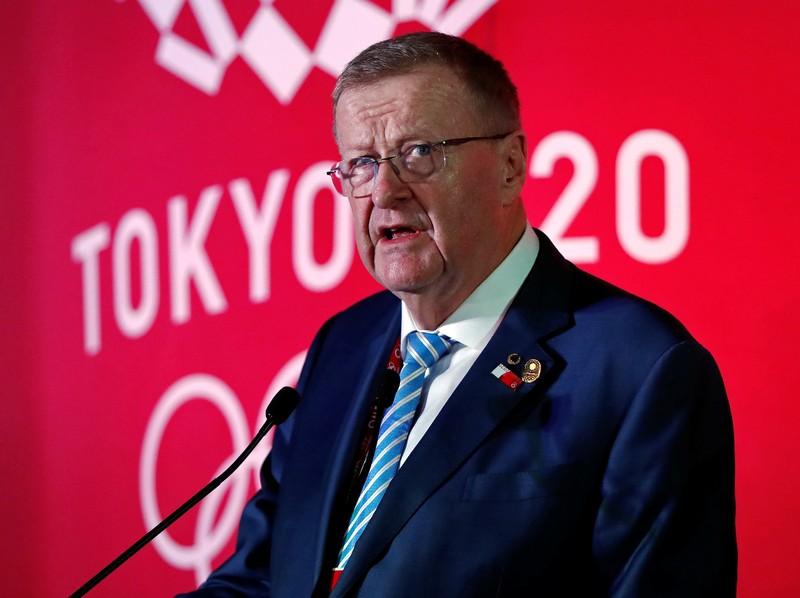 TOKYO (Reuters) – The International Olympic Committee (IOC) said on Wednesday it wants Tokyo to understand the reasons why it is switching the 2020 Games marathon to the northern city of Sapporo, a decision that has infuriated the capital’s governor Yuriko Koike.

FILE PHOTO: International Olympic Committee chairman John Coates delivers a speech during a ceremony celebrating one year out from the start of the summer games in front of Tokyo Station in Tokyo, Japan July 24, 2019. REUTERS/Issei Kato

The IOC announced a plan earlier this month to move the marathon and race walking events to the northern island of Hokkaido due to concerns about heat in Tokyo next summer.

“We owe it to the people of Tokyo to make sure they are fully briefed,” Coates said.

Coates cited the example of the athletics world championships in Doha where the heat and humidity forced many athletes to drop out of the race despite the marathon being held at midnight.

He said he had explained these reasons to Koike.

Tokyo temperatures in July and August, when the city will host the Games, regularly exceed 30 degrees Celsius with high humidity adding to the discomfort.

Coates added that he wanted to form a four-party group comprised of the IOC, the Tokyo government, national government and the 2020 Organizing Committee to work out the details of the change.

Koike, speaking at the same coordination committee meeting, repeated her stance that the races should remain in Tokyo.

“We consider it an unprecedented turn of events to make such an abrupt proposal with no consultation or discussion whatsoever with the host city Tokyo,” Koike said.

Tokyo had invested a lot of time and money into preparing anti-heat measures and had even earned praise from IOC head Thomas Bach, she said.

While the safety of the athletes was important, organizers could not ignore that many of them had been training and preparing for the Tokyo climate.

“The Games will not succeed without our trust in each other,” she said.

Koike has said the capital was ready to make further adjustments, including changing the route and start time with some media reports saying to as early as 3:00 a.m.

The IOC has said temperatures in Sapporo, which will also host soccer games, are as much as five to six degrees cooler during the day.

Organizers earlier this year had already moved up the starting times to 6 a.m. for the marathon and 5:30 a.m. for the race walk to avoid the blistering midday sun.

When Tokyo hosted the Summer Olympics in 1964, they were held in October — an option no longer possible due to international sports schedules.

Next year’s Games are set to run from July 24 to Aug. 9, with the marathon to be held on the final day.

Talking Horses: crash hero 'thrilled' to have Ascot winner named after him