Despite Wolves’s 4-0 thumping of Espanyol and Arsenal’s 1-0 win at Olympiakos, the Europa League tie that gets the most coverage on the back pages is Manchester United’s lacklustre 1-1 draw at Club Bruges.

“Blush goalie” screams The Sun, a reference to the underwhelming performance of United keeper Sergio Romero, who was exposed for the Belgian club’s goal.

Not so Wolves, who ran riot at Molineux with Diogo Jota scoring a stunning hat-trick as they put their Spanish visitors to the sword, nor Arsenal, who secured a precious advantage in their first leg in Athens thanks to a late goal from Alexandre Lacazette.

The Guardian is the only paper to make the Gunners the lead on their back page with the paper hailing the way a young side “handled the heat” of Olympiakos.

The Times reports that England will “shun” any attempt by the International Cricket Council to introduce mandatory four-day Test matches with the England and Wales Cricket Board (ECB) chief executive Tom Harrison declaring that he is opposed to the idea of a shortened format.

The proposition of reducing Tests from five to four days was first mooted at the end of last year, and it was claimed that the ECB were “cautiously supportive of the move”. But in an interview with The Cricketer magazine, Harrison said that is not the case.

“I’ve been positioned as the champion of four-day Test cricket,” he explained. “I am not… We will protect international cricket. Four-day Tests answer some questions, some of the time, but it’s not the answer to all of our problems.”

The Daily Mirror reports that Tyson Fury will “pocket a career-best purse of at least £31m” for his rematch with Deontay Wilder this weekend at the MGM Grand in Las Vegas.

The paper says that the British heavyweight has “hit the jackpot” and will rake in millions from a sell-out 17,000 crowd not to mention pay-per-view sales on both sides of the pond.

The Mirror says that the unbeaten challenger is guaranteed around £19m with the rest coming from pay-per-view figures which are “doing better than anyone anticipated”.

In another sign that Old Father Time is catching up with Roger Federer, the Swiss tennis star has announced that he won’t be competing at the French Open in May.

The Guardian reports that the 38-year-old’s disclosure that “minor surgery on his right knee will sideline him until Wimbledon at the end of June shook the tennis community”.

Having undergone surgery on his left knee in 2016, Federer’s body will once again require the surgeon’s knife and the Guardian says it “casts doubt” on whether the living legend will add to his record total of 20 majors.

Federer will ‘see you on the grass’- but is this the beginning of the end? 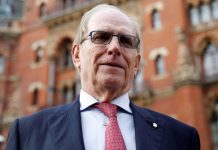