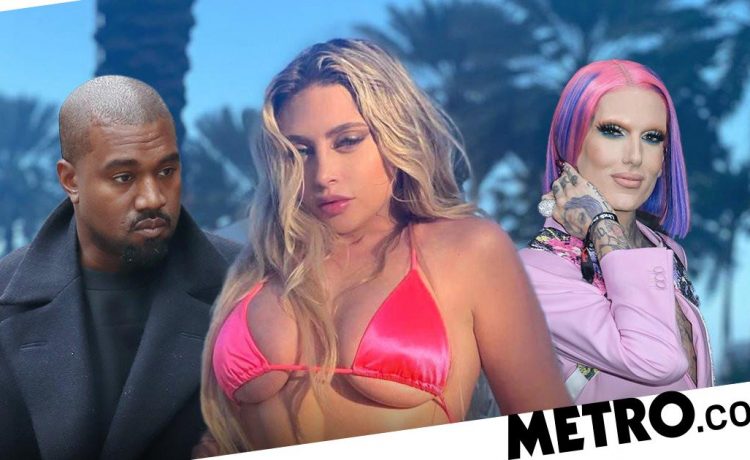 The TikTok star who started the bizarre rumour that Kanye West hooked up with Jeffree Star has admitted she made it up.

The showbiz world was shook this week when it was alleged that Kanye, 43, had cheated on his wife Kim Kardashian with beauty guru Jeffree Star, 35.

The rumour – which came amid reports that Kim, 40, is divorcing her husband of six years – made its way across the internet after being suggested by TikTok influencer Ava Louise.

Ava, who has nearly 600,000 followers on the platform, said in a video that has now been viewed 8.4 million times: ‘This whole divorce comes as no surprise. Kanye’s been hooking up with a very famous beauty guru. Male beauty guru. A lot of people in the scene have known for a while.’

The influencer went on to claim that she’d been hit by legal warnings from the Kardashians for spilling the ‘tea’.

However, Ava has now admitted that her unsubstantiated, unverified rumour was totally made up.

She shared a voice note in which she said: ‘I’m not even getting sued, I made this entire scandal up. There’s literally not one bit of truth to anything I have said.’

Ava claimed that she’d ‘tricked’ the world into talking about her again ‘because I was on a lot of Adderall and I was bored’, and added: ‘We all had fun though didn’t we? You’re welcome for the memes.’

She captioned her video: ‘I was gunna wait to expose myself but clout chasing locals I thought were my friends wanna do it first [sic].’

In the comments, Ava was criticised for making up the rumour because Kim and Kanye share four children, with many people accusing Ava of chasing fame.

The social media star later claimed that she had made $15,000 (£11,000) in three days off the back of the fake story, although did not reveal how, and tweeted: ‘My adderall wore off and I got tired of going along with it, it was getting boring like sorry Jeffree.’

Ava has form in trying to go viral – last year, she attempted to start a ‘coronavirus challenge’ by licking a toilet seat on an airplane.

After appearing on Dr Phil off the back of the TikTok, she released a single boasting about her ‘icon’ status called Skinny Legend.

YouTuber Jeffree had initially had fun with the claims, sharing pictures from Wyoming – where Kanye’s ranch is, and where Jeffree has also recently bought property – and posting a selfie with a reference to Kanye’s Sunday Service.

However, the make-up artist later clarified that the rumour was false.

In a video titled ‘Addressing the Kanye Situation’, Jeffree said: ‘I woke up and my phone was blowing up. I scrolled the Internet and I read the dumbest s*** I think I ever read in my whole entire life.

‘I guess some girl made up a whole lie on TikTok that went viral where she insinuates Kanye and Kim are getting divorced because a “big male beauty influencer” is sleeping with him.’

He continued: ‘I’m single, I’m not sleeping with anyone, this is so weird.

‘Let me just say this one time… I like very tall men. Me and Kanye have never hung out and this whole thing is really funny. So I guess if this is the start to my new year, happy new year.

‘Jeffree Star is single and I’ve never slept with Kanye.’

Meanwhile, Kim has yet to address the claims that she has hired top divorce lawyer Laura Wasser to begin settlement talks with Kanye.

The couple have been married since 2014, and share four children – North, seven, Saint, five, Chicago, who is nearly three, and one-year-old Psalm.


MORE : Mark Wright on giving football another shot after ‘pressure’ made him retire at 20: ‘It made me stronger’

READ  George Michael's new song: This Is How praised by fans as 'bittersweet' track gets posthumous release
Share on FacebookShare on TwitterShare on PinterestShare on Reddit
newsgrooveJanuary 9, 2021